Blackberries for the Home Garden

Small fruits are popular additions to the home garden. Blackberries, in particular, are productive and well suited for homeowners in most regions of North Carolina. Breeding programs have released a number of thornless varieties that are large, taste great, and because they have no thorns, are much easier to harvest than berries found in the wild. In addition, studies have shown that this fruit can help fight cancer, decrease cardiovascular disease, and slow down brain aging. Best of all, one blackberry plant can easily supply up to 10 pounds of delicious berries each year.

How to tell the difference between a black raspberry and a blackberry: 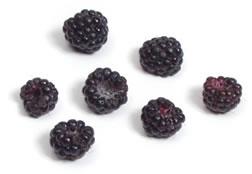 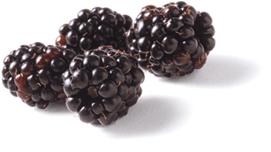 Skip to Types of Blackberries

Blackberries are divided by their growth habit (trailing, semi-trailing, and erect), by the presence or absence of thorns (thorny or thornless), and more recently by floricane- and primocane-fruiting types (also known as everbearing or double cropping). All blackberries benefit from some sort of support such as a trellis or poles to support their canes. If you have room for several plants, select early-, mid-, and late-season varieties to extend your harvest (Table 1). Each of these varieties should perform well in all regions of North Carolina except where temperatures drop below 10°F. 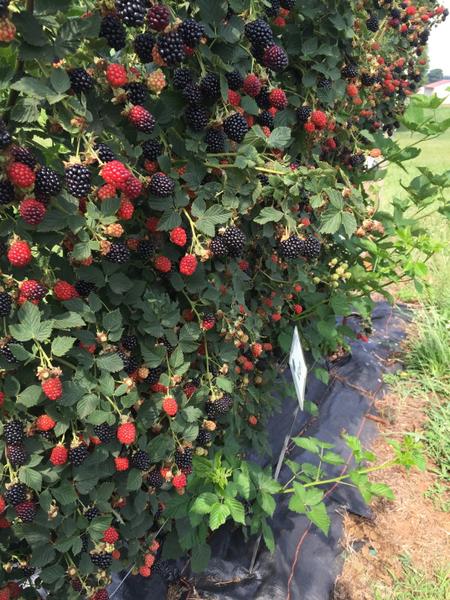 Prepare an easy-to-access location for your blackberries a year before planting. Blackberries need full sun and plenty of room to grow. The soil should be a well-drained sandy loam soil with a pH of 5.5 to 6.5. A soil high in organic matter is beneficial under non-irrigated conditions. If the soil is not well drained, establish the plants in a raised bed.

Skip to Establishment and Maintenance

Erect and semi-trailing blackberry plants should be planted about 3 to 4 feet apart, while the trailing types need 6 to 8 feet between plants. They can be planted in the early spring several weeks before the last frost. Each plant can produce 10 to 20 pounds of fruit, so four to six plants will easily produce ample berries for a family of four.

Dig a hole that is large enough to allow the roots to spread out evenly. Set bare-rooted plants into the soil about 2 inches below the crown—the point where the stem and roots merge. Fill in the hole and tamp down the soil. Water the newly set plants well, but don’t fertilize until three or four weeks later.

Fertilize after growth starts with a complete fertilizer such as 10-10-10 at 5 pounds per 100 linear feet (or about 3 to 4 ounces around the base of each plant). In established plantings, apply the fertilizer in March well before the plant starts to produce flowers and fruit.

Support the canes with a trellis. Erect and semi-trailing types perform well using a two-wire system with wires at 3 and 5 feet from the ground (Figure 1). As the canes emerge in the spring, evenly distribute them on the wires to form a fan pattern (Figure 2) Once the canes have reached the top wire, remove the tips to encourage branching. Trailing types set further apart require a different system. Start with a similar trellis with wires at 3 and 5 feet, except do not tip the canes. Instead, allow them to grow to the top wire and then weave them back down to the bottom wire and back up to the top wire to fill in the space between plants (Figure 3).

Blackberries require about 1 inch of water each week during the growing season. During fruit development, the plants will need about 2 gallons per plant each day. Mulch placed around the base of the plant reduces the need for water and helps keep weeds under control. Pine straw, wood chips, and seedless grasses are good mulches.

The fruit is ripe and at its peak sweetness when it is a dull black color. Pick fruits that are shiny black if you need to store them in your refrigerator. They won’t be as sweet, but they will last longer. Harvest will continue for three or more weeks, depending on variety.

As soon as all the fruit is harvested, prune out all the old fruiting canes and remove them from the garden, as they no longer produce fruit. Fertilize after harvest, but well before fall, a second time with 5 pounds of 10-10-10 per 100 linear feet of row. Continue to tie, tip, or train the new canes that have not produced fruit to the trellis until growth stops in the fall. During winter, prune laterals on erect types to 12 to 16 inches, and leave only four to eight canes per square yard for fruit production in the following year (Figure 4).

Primocane-fruiting types, also known as everbearing or double cropping, can be grown to produce fruit twice in a season. They will produce fruit in the late summer or fall on the tips of the new canes. If the canes are left for a second year, they will produce fruit in the second season and then die. If you choose to double crop, prune the canes in the first winter as if you were growing a floricane-fruiting type. If you choose to grow only a single crop in the late summer and early fall, prune the canes to the ground each winter. These types of blackberries will double crop best in western North Carolina, as the summer heat in the piedmont and coastal plain will limit flower and fruit development. 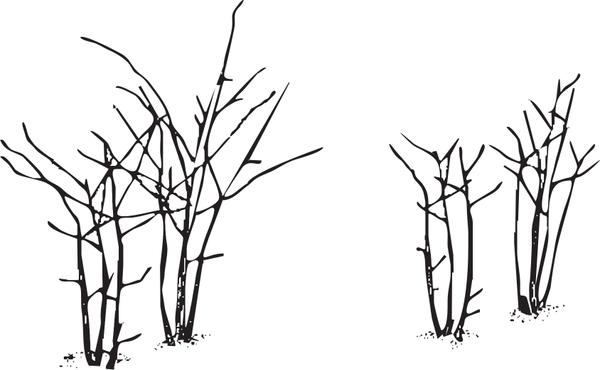 Figure 4. Erect blackberries before and after winter pruning.

Figure 4. Erect blackberries before and after winter pruning.

This publication is a substantial revision of Blackberry for the Home Garden by E. Barclay Poling, Extension Horticulture Specialist.