Scoliid wasps are dark, relatively large, robust, slightly hairy insects with light yellow spots or other markings. The most common scoliid in North Carolina is Scolia dubia. It is sometimes referred to as the blue-winged wasp. The adult is over 1/2 inch long with black antennae and a shiny black head, thorax and fore abdomen. About midway along the abdomen are two yellow spots (one on each side). These may appear as a band across the abdomen when the wasp is flying. The hind portion of the abdomen is reddish brown and somewhat fuzzy. The wings are blue-black. Scoliid wasps are usually considered beneficial insects because they help control green June beetle and other beetle grubs. They are present from June to October, but are most abundant during August. The wasps are often seen hovering a few inches above lawns in search of grubs (or males searching for females). Female wasps dig through the soil in search of the grubs, burrowing tunnels or following those made by the grubs. On locating a grub, she stings it and paralyzes it. Sometimes these wasps burrow deeper and form a chamber in which the grub is entombed. Afterward she lays a egg, which stands on end. Sometimes females sting grubs but do not lay eggs. The grub never recovers from the sting. When it hatches, the wasp larva consumes the grub in about two weeks and then spins a cocoon to spend the fall and winter as a mature prepupa. The prepupae molt into pupae from which emerges a new generation of adult wasps. 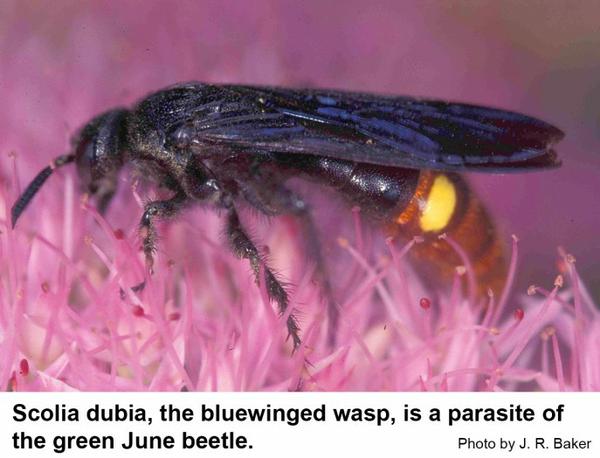 Blue-winged wasps are most abundant in August.

Blue-winged wasps are most abundant in August. 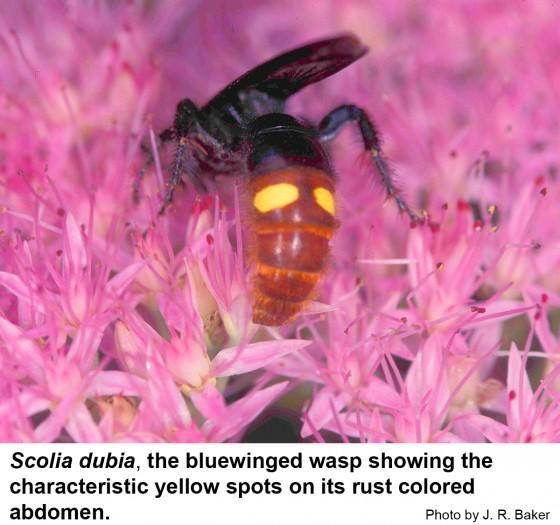 Blue-wing wasps have two conspicuous yellow spots on the abdomen.

Blue-wing wasps have two conspicuous yellow spots on the abdomen.

Blue-winged wasps are often noticed flying over pastures or lawns that are infested with white grubs, especially green June beetle grubs. These wasps also forage for nectar on flowers of goldenrod and whatever else is in bloom.

Since these wasps help control green June beetles and rarely (if ever) sting people, no control measures are suggested.