Scoliid wasps are dark in color, often metallic, relatively large, robust, slightly hairy insects with light yellow spots or other markings (Figure 1). One of the most common Scoliid wasps in North Carolina is Scolia dubia. It is sometimes referred to as the blue-winged wasp. The adult is over one-half inch long with black antennae and a shiny black head, thorax, and fore abdomen. About midway along the abdomen are two yellow spots (one on each side) (Figure 2). These may appear as a band across the abdomen when the wasp is flying. The latter portion of the abdomen is brownish and somewhat fuzzy. The wings are dark blue. 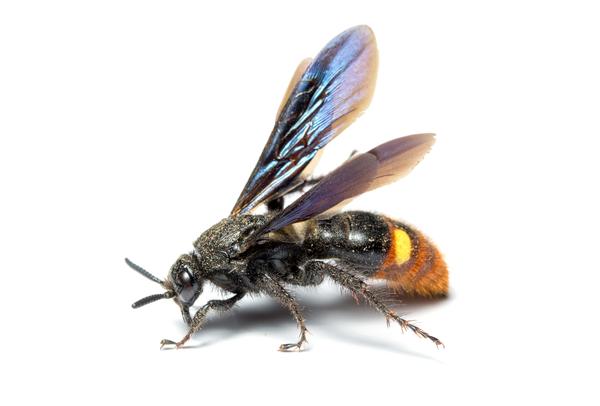 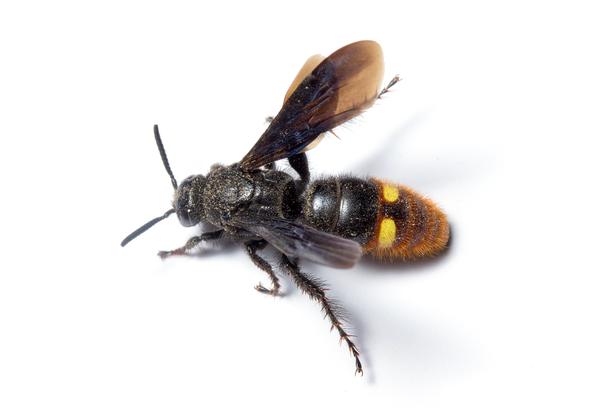 Scoliid wasps are usually considered beneficial insects because they help control green June beetle and other grubs. Scoliid wasps are present in North Carolina from June to October. However, they are most abundant during August. The female wasp flies low across the soil in search of grubs. When it detects one, it digs through the soil burrowing its own tunnel or following one made by the grub. Once locating a grub, she stings it on the throat and paralyzes it. At first, the grub appears to be dead, but after a day or so it can feebly move its legs. Such paralyzed grubs can live for a considerable time. The female wasp then lays an egg transversely on the third segment of the grub. The paralyzed grub provides a fresh food supply for the wasp larva after it hatches from the egg. Once a grub has been stung, it never recovers.

Scoliid wasps are very important natural agents in the control of green June beetle grubs in the soil. Adult Scoliid wasps feed on nectar and pollen of flowers. They do not sting unless stepped on or carelessly handeled. In early August, the wasps often rest on flowers but at night they burrow into the soil. Scoliid wasps are often noticed flying just a few inches above lawns infested with grubs in a loose figure-eight pattern. Sometimes these wasps are quite abundant and conspicuous as they partiicipate in their mating flights. After mating, females spend more time digging for grubs and flying wasps are not as noticeable.

Since there is no record of anyone having been stung by Scoliid wasps, no control measures seem needed. Their presence, however, means that grubs are present. Monitoring for a white grubs infestation may be appropriate. If grubs have been a problem, see White Grubs in Turf.