The cabbage palm caterpillar, cabbage palm worm, or palmetto borer, Litoprosopus futilis, is a sometimes a serious pest in Florida where cabbage palm flowers supply nectar that bees use to make cabbage palm honey. Perhaps global warming explains why it has found its way into North Carolina. The moths are tan with a wing expanse of about 2 inches. The forewings have some darker mottling. A distinctive dark eyespot about 3/16 inch across is found on each hind wing. Each eyespot has two, tiny white lines. On fronds, females lay their eggs in masses of about 17 eggs and cover the eggs with scales perhaps as defense against predators. Upon hatching, the tiny, new caterpillars eat their egg shells. Caterpillars feed, molt, and grow through six or so stages until they reach 11/2 inches. Younger caterpillars are pinkish with shiny black heads and spot behind the head. Older caterpillars are darker with pinkish stripes along the body. Mature caterpillars have six long, white hairs on most segments. These white hairs are longest near the head and tail. During the day, the caterpillars usually hide, and at dusk emerge from their shelters and began to feed. Moths usually lay their eggs just as flower buds are starting to form. The caterpillars hide deep in the developing flower spikes and sometimes destroy every flower bud. As they develop, cabbage palm caterpillars incorporate frass into a sort of unsightly shelter. They also bore into stems and feed on fronds. When food runs short, these insects have the unfortunate social habit of eating one another. Mature caterpillars drop to the ground on a silk thread and crawl about seeking a place to incorporate fibers into a tough, silken cocoon inside of which they pupate.The caterpillars may shred available materials such as draperies, rugs, stuffed furniture, bedding and clothing, when making their cocoons. They have even been observed chewing on drywall. In addition, wandering cabbage palm caterpillars dribble reddish-brown fluid that stains surfaces as they crawl. 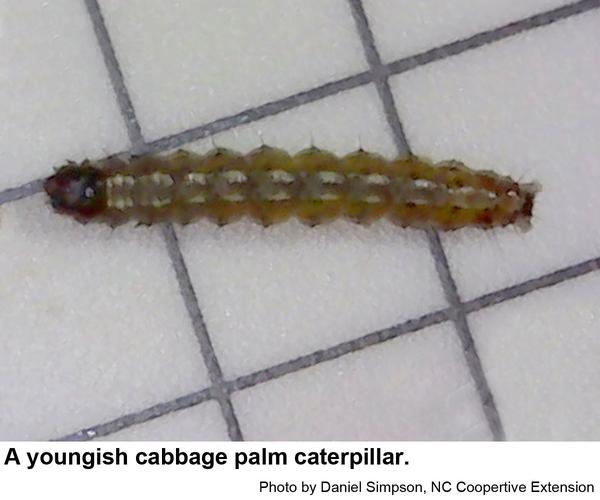 The cabbage palm caterpillar grows up to 1.5 inches long.

The cabbage palm caterpillar grows up to 1.5 inches long.

Cabbage palmetto and saw palmetto seem to be the only hosts of the cabbage palm caterpillar. They even chew on decaying palm fronds in leaf litter although that may be an effort to gather fibers to incorporate into their cocoons.

Cabbage palm caterpillars are victims of parasites and predators such as a tachinid fly parasitoid, red imported fire ants, lacewing larvae, and spiders. These beneficial insects usually keep cabbage palm caterpillar populations down to an acceptable level. Occasionally, these caterpillars escape from their natural controls to the point that without control, damage to palms is not acceptable. Once the borers bore inside flower stalks, there's not much that can be done other than pruning out the infested stem and destroying it because the worms are protected by the stem and often by a layer of webbed frass (insect poop). Don't spray palmettos while they are in bloom because pollinators can be killed. A systemic pesticide applied now to the soil under an infested plant would be too slow to prevent further damage and could translocate into the floral nectaries to contribute to "mad bee disease." It is best is to prune out the infested stem and destroy the borers. Once awareness has been raised, next spring before the flower buds open, spray the flower stalks with a pyrethroid insecticide. Pyrethroids have a fairly long residual life on plants, but that residue will not harm pollinators because they land on open flowers, not on the bud scales that peel back to reveal the flowers. Several pyrethroids are labeled for residential landscape use. The active ingredient of any pesticide is listed on the front label usually in very small type near the bottom. The active ingredient of pyrethroid insecticides all end with "-thrin" such as bifenthrin, lamda-cyhalotrin, permethrin, etc. (Don't purchase resmethrin or pyrethrum as their residues do not last long once they are sprayed.) Pyrethroids are available in big box stores, nurseries, and plant centers. Even if a pyrethroid does not kill the borer eggs, when cabbage palm caterpillars hatch they often eat the egg shell, so the poor thing may perish soon after hatching. Pyrethroids are also repellent to insects, so cabbage palm caterpillar moths are likely to avoid treated plants. Insect populations often fluctuate (sometimes dramatically) from year to year and place to place. To spray a pyrethroid is a gamble because the following year cabbage palm caterpillars may not appear. On the other hand they could be more numerous.