Armored scales are very small insects that secrete a tiny fish scale-like armor under which these insects grow and reproduce. The armor protects these armored scales from many parasites and predators. Camellia scales are armored scales that usually feed on the lower leaf surface of camellias and sasanquas, but they also infest hollies as well. The major difference between the camellia scale insect and the much more damaging tea scale insects is that the male armor of camellia scales is brownish whereas the males of tea scales have snow white armor. The armor of female camellia scales varies from light to dark brown and resembles an oyster shell. Nearly 2.5 mm in length, it covers the white to purplish, sac-like insect. The immature male scale lives under a smaller shell narrower than that of the adult female. Immature females secrete an oval armor about 0.8 mm long. When 40 to 50 days old, females lay 25 to 55 eggs, which hatch in 11 to 24 days. From the shell, the young nymphs (crawlers) migrate either to fresh leaves or to old leaves near the parent. As soon as they settle, they begin to secrete a protective covering. Twelve to 17 days after birth, they molt. The second molt occurs 6 to 10 days later, after which the armor gradually enlarges to accommodate the growing insect. The life cycle is usually completed in 60 to 70 days. Few eggs are laid outdoors during the winter, but hatching may continue in greenhouses and in cold frames. Because of overlapping broods, all stages of the life cycle are present in summer. 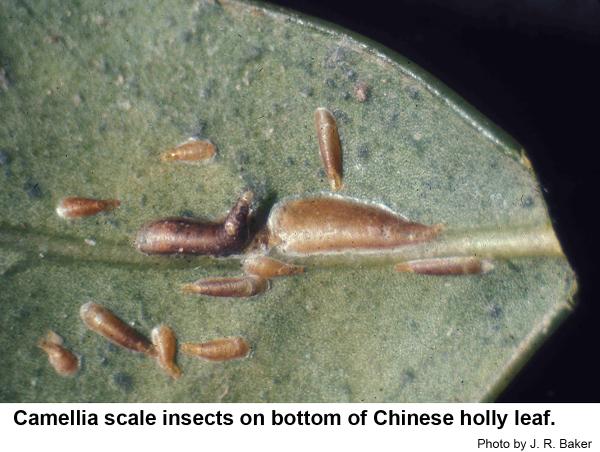 Camellia scales feed on the lower surface of camellia and holly leaves.

Camellia scales feed on the lower surface of camellia and holly leaves. 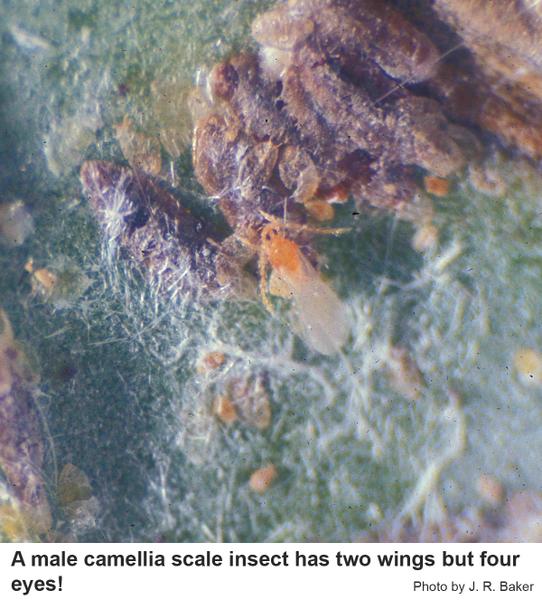 Camellia scales usually feed on the lower leaf surface of camellias and sasanquas, but they also infest hollies as well. Heavily infested foliage may drop prematurely but it is not discolored.

The camellia scale is often heavily parasitized by tiny wasps, which make holes in the shells when they emerge. Lady beetles also feed on this scale. Camellia scales are not particularly resistant to pesticides. Horticultural oils can be used for camellia scale control on hollies and for control on camellias, too. These oils pose little threat to the environment or people and pets. Probably 18 different brands of horticultural oils are found on the market. Although they are essentially the same chemical, rates for application on the labels vary significantly. During the growing season, it would be well to use not more than the 2% rate to prevent oil damage to the plants. When plants are completely dormant, it is possible to use up to 4% oil. Not all oils have this high rate printed on the label, and folks must follow the label directions for oils (and all pesticides). If the weather has been dry, the plants should be well irrigated before treating them to prevent pesticides from damaging the plant.