When soil is exposed during construction activities, runoff that occurs during storm events tends to pick up soil particles and carry them to the nearest body of water. Larger particles, such as pebbles and sand, quickly settle to the bottom once the flow rate slows.

However, clays and fine silts settle much more slowly and tend to stay suspended. These suspended particles result in turbidity that can travel many miles in streams or keep ponds and lakes looking muddy for a long time after a storm (Figure 1). Turbidity reduces the productivity of the affected waters, decreases their recreational value, and increases treatment costs for industrial or drinking water plants. Several chemical treatment options are available to reduce turbidity in impounded water, and they are described here. 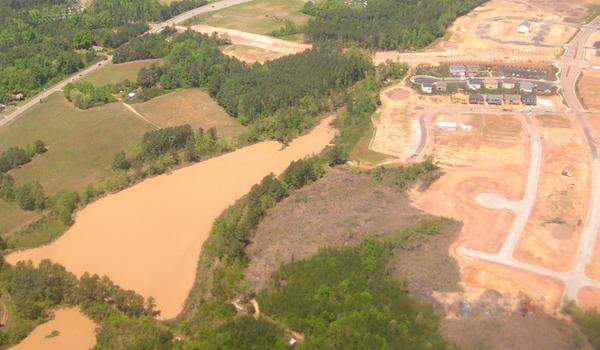 Figure 1. A pond adjacent to a construction site shows the effects of turbidity.

Figure 1. A pond adjacent to a construction site shows the effects of turbidity.

Skip to PAM, Gypsum, and Alum

Polyacrylamides, or PAM, is a term describing a wide variety of chemicals based on the acrylamide unit. When linked in long chains, some portion of the acrylamide units can be modified to result in a net positive, neutral, or negative charge on the PAM molecule. The positively charged, or cationic, PAMs, usually are not used for turbidity control because they can be toxic to fish and other aquatic organisms if they enter water bodies in sufficient concentrations. The negatively charged, or anionic, PAMs, are much less toxic and are widely used in furrow irrigation agriculture. This PAM is the focus of this fact sheet, and all references to “PAM” are to the anionic forms.

PAM is available as a crystalline powder, an emulsion, or a solid block or “log.” It is nontoxic to humans and other species in the environment. One of the ingredients used to make PAM is acrylic acid, which is a known carcinogen. As a result, the PAMs available for environmental applications are required to have less than 0.05 percent free acrylic acid. This allows them to be used in food processing, drinking water treatment, and other uses where human exposure is likely.

PAM is water soluble, but it dissolves very slowly and requires much agitation and time to dissolve. Water containing more than 0.1 percent PAM is noticeably viscous, and most PAMs have a maximum concentration of 0.5 to 1 percent in water. When dry PAM becomes wet, it is very slippery and sticky and can create a slipping hazard.

Gypsum is a natural mineral deposited widely around the earth. It is made up of calcium sulfate and water in the formula CaSO4·2H2O. Molding plaster is similar but has a slightly different formula— CaSO4·0.5H2O. The largest use of gypsum is in the manufacture of wallboard, but it is also used in water and wastewater treatment and other industrial processes.

Alum is an aluminum sulfate material (Al2(SO4)3·16H2O), which also can be used for water clarification.

Construction sites of more than one acre are required to install systems to retain sediment that is produced on that site. These include silt fences, sediment traps, storm drain inlet protection, and others. However, turbidity created by suspended clays and fine silts is usually still quite high in water discharged from these systems.

There are three ways to reduce this turbidity:

The most practical and least expensive option for most situations is flocculation.

Flocculation is the process of causing small, suspended materials to stick to each other to form “flocs.” These larger flocs settle more readily, compared to individual particles. PAM can create flocs in many of the suspended sediment types found in North Carolina. Gypsum, molding plaster, and alum can also bring together clay particles through coagulation, or a bridging between particles, which also accelerates settling. However, each site must be evaluated individually for responsiveness to PAM or coagulants, as described below.

One of the key factors in making a flocculant work is to ensure that it is dissolved and thoroughly mixed with the runoff water. This can be accomplished in several ways. Introducing PAM to the runoff at a point of high flow velocity helps to provide the turbulence and mixing needed to maximize the suspended sediment exposure to the large PAM molecules. Examples include placement in storm drain junction boxes where a pipe is dropping water, in a slope drain, or in other areas of falling or fast-moving water that are upslope from a sediment trap or basin.

As mentioned before, PAM can be purchased as a powder, an emulsion, or a solid block. Because it dissolves slowly, introducing the powder directly into runoff will not be effective because the granules will not dissolve fast enough before the water leaves the site. Instead, powders need to be dissolved in water, and then the PAM solution may be metered into the runoff. This approach is often used in furrow irrigation, and PAM is added at 5 milligrams of PAM per liter (5 parts per million). Tests on North Carolina soils have consistently shown that 1 to 5 parts per million (mg/L), or 1 to 5 ounces of PAM per 1,000 cubic feet, is the optimal dose for reducing turbidity (see Table 1). Some of the technical challenges include ways to adjust the amount of solution added to runoff flow to maintain proper PAM concentrations, the stability of the PAM once in solution, and freezing of the PAM solution during colder months.

Two other options for introducing PAM into runoff involve running the water over a solid form of PAM. Powders can be sprinkled on various materials, such as geotextile liners, check dams, or other places where the PAM can contact runoff. PAM granules will stick to wet surfaces and will resist removal by flowing water, dissolving slowly as the water runs over the granules. PAM may also be purchased as solid blocks or “logs,” which are designed to be placed in flowing water to dissolve the PAM from the log somewhat proportionately to flow. The solid PAM blocks typically have substantial amounts of non-Pam components, which are included to improve PAM release, maintain the physical integrity of the block, and enhance PAM performance.

While these solid forms of PAM do not have the same dosing challenges as liquid PAM, they have their own drawbacks. The amount of PAM released is not adjustable and is generally unknown, so a trial-and-error approach must be used by moving or adding more powder or logs to get the desired effect. Because PAM is sticky when wet, it also tends to accumulate sediment and debris from the runoff. This results in the block’s becoming “armored” or covered with solids, reducing PAM release into the runoff. The solid forms also tend to harden when allowed to dry, and this in turn slows the release of PAM initially during the next storm until the log becomes moist again.

To avoid these problems, the user must do two things to ensure PAM release from solid forms:

Examples of one method for achieving both results are given in Figure 2, Figure 3, and Figure 4.

Once the PAM is introduced into the runoff and thoroughly mixed, the runoff must be captured in a sediment trap or basin to allow time for the flocs to settle. It is important that the inlet of this structure be stabilized with geotextile or stone to prevent erosion at the headwall. Such erosion within the basin can contribute significantly to basin turbidity and reduce the effectiveness of the PAM treatments. Other modifications are also useful, such as installing baffles across the basin or dewatering from the basin surface using a skimmer or similar device. Baffles made of jute and coconut are highly effective in reducing velocity and turbulence in sediment basins. Other, similar porous materials may also be effective.

Like soils, sediment characteristics are very different across the state. Therefore, it is important to match the sediment from your site to the correct PAM product. Some of the products are made of a single PAM, while others are a mixture of two or more PAMs and possibly other ingredients. On large sites, you may have to use more than one PAM product in order to control turbidity at different locations.

At present, the only way to match your sediment type to the PAM product is to test a number of products for effectiveness. This can be done by mixing a small amount of each PAM product in separate jars of water with a small amount of sediment, shaking for 10-20 seconds, and then determining which product clears the water the most quickly (see box below). This process is usually done by the PAM dealer or supplier because these businesses maintain a large stock of different PAM products.

The coagulants (gypsum, molding plaster, or alum) have also been demonstrated to reduce turbidity in sediment basins. The material is applied by hand directly to the water after each storm. A dose rate of 20 to 30 pounds per 1,000 cubic feet of water, spread evenly to the surface, has been found to reduce turbidity. This has not been widely tested but is one option. The obvious drawback is that the material has to be spread by hand after each storm, which is not only labor intensive but also means the basin has to be large enough to store the runoff. Otherwise, you will miss a portion of the runoff before treatment. The dose that produces less than 250 milligrams dissolved SO4 per liter of water, as required in North Carolina, is 25 pounds per 1,000 cubic feet for molding plaster (66 percent SO4) and 30 pounds per 1,000 cubic feet for gypsum (56 percent SO4).

The treated sediment that is removed from the basins does not have any inherent toxicity, and it may be disposed of in the same manner as untreated sediment. This generally means it should be placed away from flowing water and stabilized with vegetation and mulch to prevent it from eroding.

Figure 2. A check dam system uses a length of corrugated pipe to protect the PAM log from heavy sediment (check dams); the pipe also provides a mixing zone and prevents the log from being exposed to drying conditions.

Figure 2. A check dam system uses a length of corrugated pipe to protect the PAM log from heavy sediment (check dams); the pipe also provides a mixing zone and prevents the log from being exposed to drying conditions.

Figure 3. A solid block of PAM is placed in a perforated riser surrounded by washed gravel. This provides a settling area for heavy sediment (in basin) upstream of the PAM block, as well as a moist, protected area for it.

Figure 3. A solid block of PAM is placed in a perforated riser surrounded by washed gravel. This provides a settling area for heavy sediment (in basin) upstream of the PAM block, as well as a moist, protected area for it.

Figure 4. A riser basin dewaters through the perforated riser where PAM blocks have been placed. This creates a zone for the PAM to dissolve and mix with the storm water.

Figure 4. A riser basin dewaters through the perforated riser where PAM blocks have been placed. This creates a zone for the PAM to dissolve and mix with the storm water.

The first and best line of defense in preventing off-site movement of sediment is erosion control. The old, proven systems of mulch and seed, applied properly, can be very effective, but turbidity will always be present in construction site runoff. PAM can be effective at reducing this turbidity if the correct type is selected for each site and sufficient mixing is allowed. The method for introducing PAM to runoff water can be tailored to individual sites, but it is best accomplished when heavy sediment is removed first. Treated runoff must be collected in a sediment trap or basin in order for the flocs to settle from the water. The use of porous baffles and surface outlets will improve the performance of these systems