Cicadas are sometimes incorrectly called harvest-flies or "locusts." (They are not flies and true locusts are Old World grasshoppers). Cicadas are medium to large insects with long, transparent wings held peaked over the body when at rest. The antennae are two short bristles. The annual dog-day cicadas (Tibicen sp.) are large, stout, dark insects with lighter markings and greenish margins on the wings that occur every summer,. Some of the dogday cicadas are two inches long including the wings. At least seven species of Tibicen are found in North Carolina. One species of Cicada and the petite Cicadetta calliope also occur here. The harmless, but intimidating cicada killer wasps are predators of annual cicadas.

We have several species of periodical cicadas (Magicicada spp.). Disagreements still exist about the separation of some of these as distinct species. Some emerge on 13-year cycles and some emerge on 17-year cycles. Brood emergences usually contain more than one species. The periodical cicadas are all similar in appearance and are 1 to 11/2 inches long including the wings. The eyes, legs and margins of the wings are reddish orange. Periodical cicadas sing and fly in spring, whereas our other species of cicadas are active during the summer. 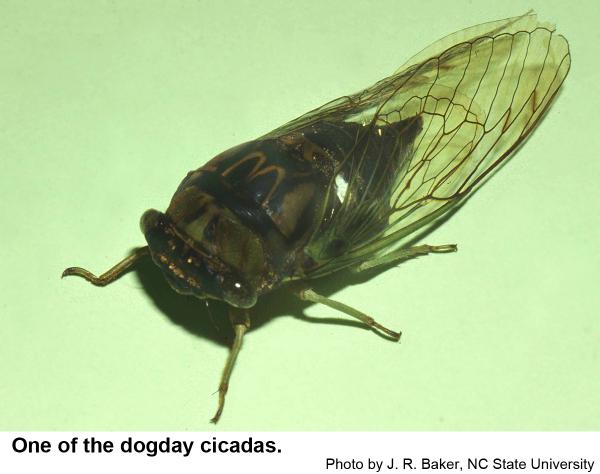 Tibicen cicadas are our largest cicadas.

Tibicen cicadas are our largest cicadas. 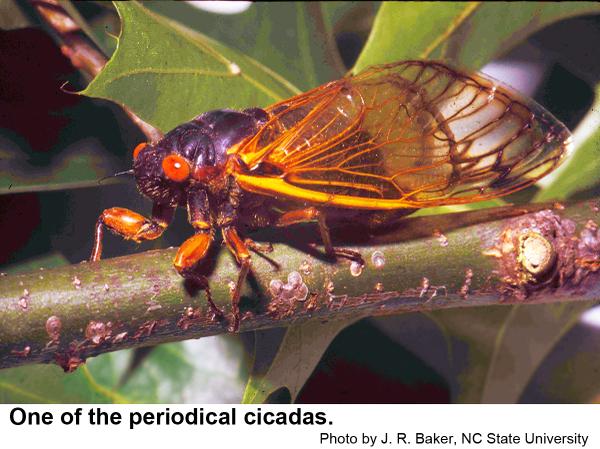 Periodical cicadas have reddish orange eyes and are usually seen by the thousands.

Periodical cicadas have reddish orange eyes and are usually seen by the thousands.

After spending from 2-17 years in the soil, cicada nymphs dig their way to the surface (sometimes constructing mud "chimneys" up to 3 inches tall). In late May or early June, the nymphs eventually crawl to the trunk of a tree or some other object and cling there. Soon the insect molts into the winged adult stage, leaving behind the cast skin. Adults are active during daylight hours.

Adult males begin to sing with a shrill buzzing noise to attract females. After mating, females use their saw-like ovipositors to split open the bark of hardwood twigs and insert eggs in two rows. Damage by cicadas is from the tiny slits made during egg laying. If there are many, dying tips of branches may be noticed. This is normally not a major problem for large trees. After 6 or 7 weeks the eggs hatch and tiny ant-like first stage nymphs drop to the soil to burrow in for the next 2 or more years (periodical cicadas develop for 13 to 17 years). While in the soil, the nymphs feed on the roots of many kinds of trees.

Farming and urbanization of suitable habitats have reduced the populations of many cicadas, and it is thought that some broods of the 13-year and 17-year cicadas may be extinct. In North Carolina, our extant broods of the periodical cicadas include Brood IX, scheduled to emerge in 2020 in the Northwest counties. Brood X is scheduled again for 2021. Brood XIX should emerge in pockets across most of the state except in coastal counties in 2024. Brood XIV should cover areas of the state west of the Triad next in 2025. Brood I is expected to emerge in the foothills in the spring of 2029. Brood II should cover about the same area in 2030. Brood VI should return in the western third of North Carolina in 2034. 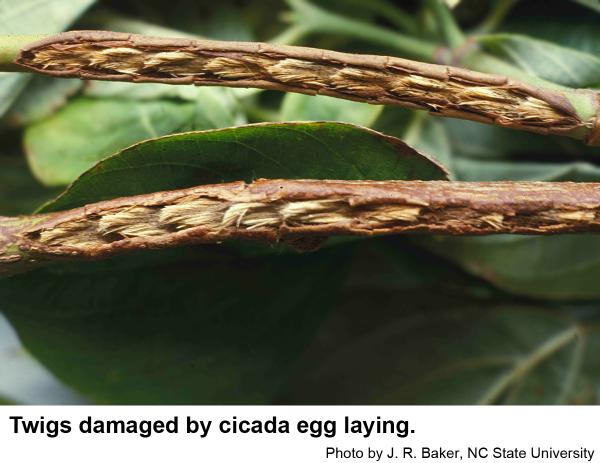 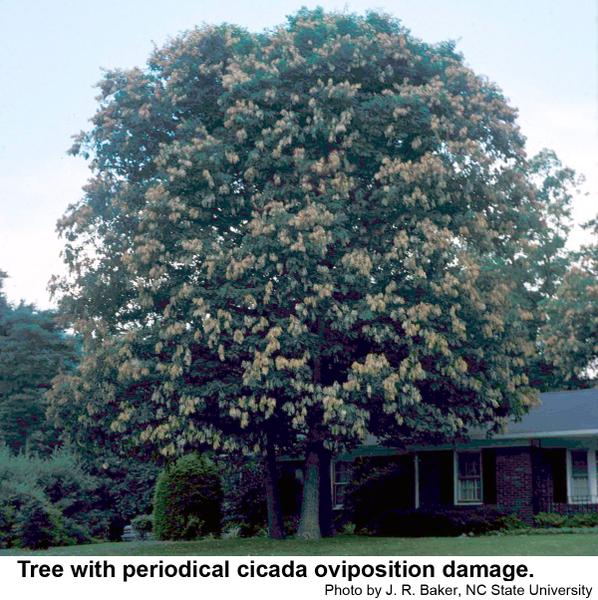 Periodical cicadas may kill large numbers of twigs as they lay their eggs.

Periodical cicadas may kill large numbers of twigs as they lay their eggs. 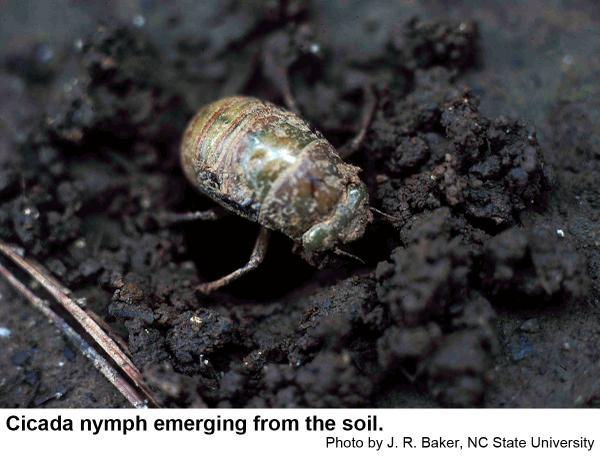 Cicada nymphs spend most of their lives underground.

Cicada nymphs spend most of their lives underground. 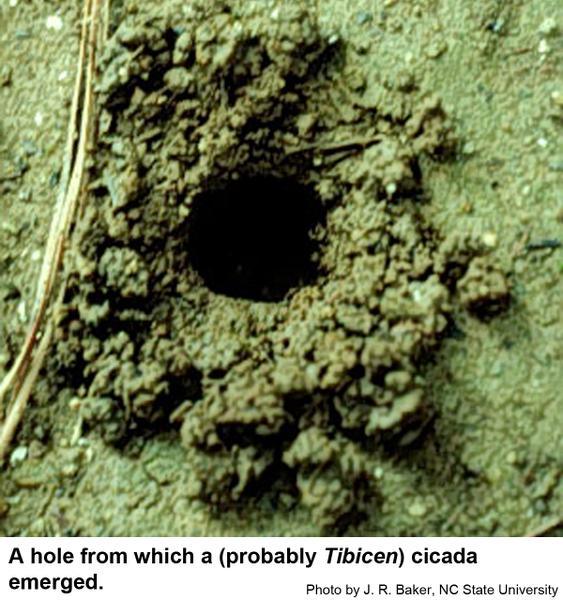 If the soil is wet, the hole from which a cicada nymph emerges may have a chimney around it.

If the soil is wet, the hole from which a cicada nymph emerges may have a chimney around it. 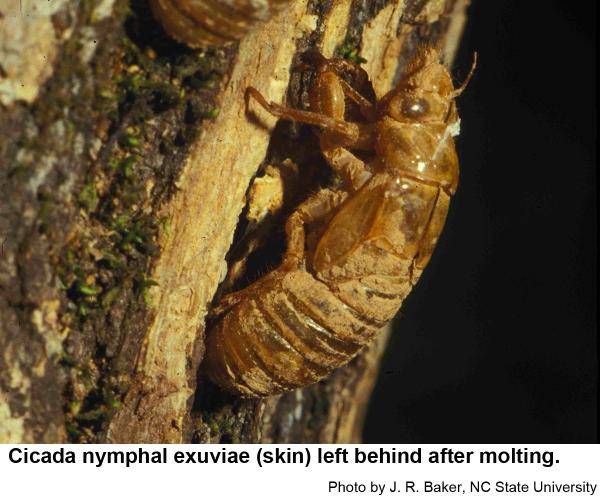 Nymphs climb nearby objects to molt into adults leaving behind a cast skin.

Nymphs climb nearby objects to molt into adults leaving behind a cast skin.

In woodlands, around homes and in most landscapes it is neither practical nor desirable to try to eliminate cicadas. However, landscapers, nurserymen and orchardists may want to protect specific valuable woody shrubs and small trees. Cicadas are susceptible to carbaryl (Sevin) and pyrethroid insecticides. In case of a large emergence of periodical cicadas, treat as soon as adults become numerous. Spray highly valuable trees and shrub until moist. Two or three applications may be needed 5-7 days apart. Small ornamental trees and shrubs can be protected by covering with a screening material such as mosquito netting or some other light-weight fabric. Heavily damaged twigs should be pruned out. Caution: Carbaryl can cause thinning of apples when applied within a month after bloom, especially the cultivar 'Red Delicious.'

For more emergence areas and more information and cicada sounds, visit the University of Michigan Museum of Zoology cicada site.