Common leaf spot or Mycosphaerella leaf spot is a common disease of strawberry but rarely serious in plasticulture systems. It can be a problem in matted row systems. Several California cultivars are very susceptible, especially when grown on black plastic.

Symptoms begin as small round purple spots 1⁄8-inch to 1⁄4-inch in diameter on upper leaf surfaces (Figure SS-1). Lesions may also develop on fruit (black seed), caps, fruit trusses, petioles, and runners, and can grow to 3-6 mm in diameter. On older leaves the center of the lesion changes from tan or gray to white, with reddish purple to rusty brown margins, while on younger leaves the lesions stay light brown. Lesions may form on the undersurface of leaves, but the color is not as intense. Leaves may die if numerous lesions coalesce. Usually the lower leaves die out. Symptoms may vary with strawberry cultivar and strain of pathogen. Temperature may also affect the appearance of leaf spot. Atypical lesions, uniformly brown without darker borders or lighter centers, may form in warm humid weather on young leaves. 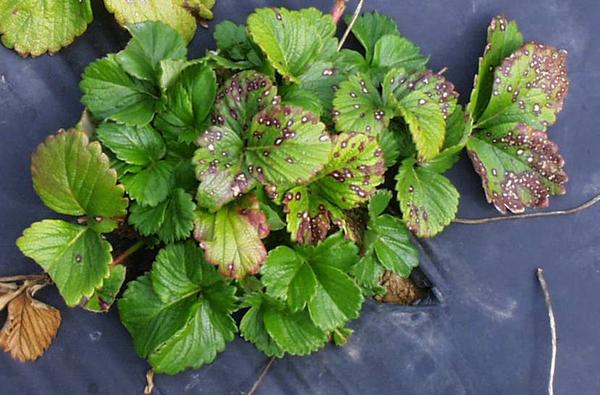 The fungus may overwinter as sclerotia in the soil, lesions on living leaves, or in indigenous strawberry populations. However, common leaf spot problems have most typically been associated with transplant source. Conidia are the primary inoculum in southern regions and are produced in spring and early summer on upper and lower leaf surfaces in matted row systems. In annual systems, disease build-up has occurred in the late fall and early spring. In wet weather or during overhead irrigation, conidia are splash dispersed and infection occurs on wet leaves at temperatures between 50 and 80°F. Ideal temperatures are between 68 to 77°F. Fungal colonization is greatly influenced by leaf age, because young and old tissue are not as susceptible as middle aged tissue.

Cull severely infected plants and coordinate with your supplier to reduce number of plants with symptoms.

Some northeastern varieties have resistance to M. fragariae, but there are no resistant plasticulture varieties.

Growers generally do not treat for this disease specifically, but broad spectrum fungicides used to control other diseases also control this one. Use of protective fungicides is only necessary on highly susceptible varieties and if common leaf spot symptoms are prevalent in the transplants. In most cases, symptoms in the Fall have no impact on yield. New growth in the late fall or early spring is usually healthy and most occurrences of common leaf spot do not require fungicide sprays. If the winter is warm and wet, new growth may become infected with many lesions and a fungicide application is warranted. Some resistance to fungicides has been observed but not documented in the southern region. Soil fumigation may successfully reduce inoculum levels in the field for matted row production systems but carry over from one year to the next has not been observed as a problem. See the Southeast Regional Strawberry Integrated Management Guide for current recommendations.

Mycosphaerella fragariae is an ascomycetous plant pathogenic fungus that causes one of the most common diseases of strawberry. M. fragariae reproduces by forming perithecia that are black, partially embedded, globose (100-150 µm) and minutely ostiolate. Within each perithecium, asci (30-40 x 10-15 µm) that are cylindrical to clavate, have short stalks, and contain 8 spores, are formed in small clusters. Ascospores (12-14 x 3-4 µm) are hyaline and two-celled with a median septum with each cell generally containing two oil drops (Maas, 1998).

The anamorph of M. fragariae, Ramularia brunnea is actually more commonly found on strawberries during the growing season, especially in southern latitudes. This anamorphic state produces conidia that are elliptical to cylindrical (20-40 x 3-5 µm) hyaline, and zero- to four-septate. The conidia are often formed in short chains and are borne on short, hyaline, unbranched, and frequently curved conidiophores (Maas, 1998).

Hyphae of M. fragariae may aggregate and form sclerotia which resemble perithecia in size and shape but lack a cavity.

Mycosphaerella louisianae Plakidas is another Mycosphaerella species that causes leaf spot on strawberry. This pathogen has smaller perithecia, asci, and ascospores than M. fragariae and also occurs in the southeast.

Lesions produced by M. fragariae differ depending on host cultivars and environmental conditions during infection (Carisse et al., 2010). Symptoms of common leaf spot may be confused with those of Diplocarpon earliana, which produces purple blotches on the leaf surface. If signs of the pathogen are not evident on a symptomatic plant, individual leaves or leaflets may be incubated in a moist chamber for 24 to 48 hours to induce sporulation.