American sycamore (Platanus occidentalis L.) is a tree species native to the southeastern United States, which could be a prominent source of a biomass feedstock for sustainable bioenergy production. Research has demonstrated its superiority in survival, biomass increment, excellent coppicing (harvesting) ability, weed resistance, resilience to adverse conditions and successful establishment marginal lands (Ile et al., 2021, Domec et al., 2017; Fischer et al., 2017). If it is correctly integrated into traditional agricultural practices, it has the potential to enhance socio-economic well-being by providing opportunities for farmers/landowners to diversify farm income (new wood pellet markets/industries). It could possibly serve as a replacement to tobacco for struggling tobacco communities. Furthermore, it could enhance environmental quality/sustainability by improving soil health/soil organic carbon, removing carbon from the atmosphere and generally improve the environmental quality and biodiversity of North Carolina Agriculture and forestry. This factsheet summarizes recent research that investigated the productivity of sycamore after coppicing and grown for multiple rotations on marginal lands.

Coppice Sycamore as a SRWC

Skip to Coppice Sycamore as a SRWC

In the 1970s and 1980s, sycamore was considered a promising hardwood plantation species that was planted by pulp and paper companies in the southeastern United States. It has a fast growth rate with medium wood density, excellent coppice ability, and thin bark (thus low ash content) (Isenburg, 1981). Unfortunately, the susceptibility of sycamore to complex diseases (leaf scorch (Xylella fastidiosa), canker stain fungus (Ceratocystis fimbriata), botryodiplodia sycamore canker (Botryodiplodia theobromae) (Henneberger et al., 2004), and the anthracnose disease caused a decline in the study of sycamore. With a growing interest in the use of woody biomass for bioenergy, genetic engineering and coppicing sycamore stems could be a way to keep shoots in the juvenile stage, thereby preventing disease from forming on mature stems (Rousseau, 2009; Filer, 1975) (Figure 1).

A ten-year-old study of American sycamore grown on an eroded agricultural land in the piedmont of North Carolina, with no fertilizer and/or irrigation. There was application of glyphosate herbicide during its establishment in 2010. Trees were then harvested twice in 2013 and 2019 to estimate biomass productivity. After harvest they were left to grow back without any additional inputs. Results showed higher biomass productivity in the higher planting densities, though individual tree diameters were smaller in the high planting densities. The increase in productivity of sycamore from the first rotation to the second rotation is due to the pre-existing root systems and stumps from the previous rotation after coppicing, producing a large amount of biomass quickly (Ile et al., 2021). See Table 1 and Figure 2 below.

Sycamore seedlings tolerated planting in a cold wet winter, followed by a very hot dry summer (year 2011) on the poor soil of an eroded agricultural land. They also survived and eventually suppressed intense weed competition that was prevalent on the former agricultural field. The other woody bioenergy tree species, sweetgum, tulip tree, and poplar trees that were planted alongside sycamore in 2010, were replanted at the beginning of the second growing season of the first rotation. However, they couldn’t tolerate the extreme hot conditions and suffered very high mortality by the end of the season. Furthermore, sycamore wasn’t affected by soil water stress (drought) that was simulated as a 20% rainfall reduction treatment in another sycamore study (Domec et al., 2017). The ability of sycamore to increase productivity through multiple rotations while tolerating various biotic and abiotic environmental stresses, makes it a good candidate for the woody biomass industry and the production of wood pellets. 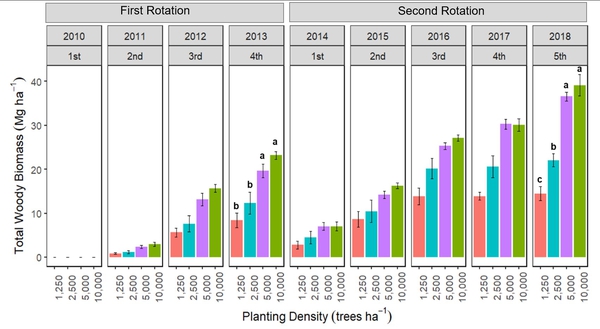 A decline in the Annual Net Primary Productivity (ANPP) of sycamore after the third year has been reported in research study. This declining effect of productivity after three years appears to be a real biological phenomenon (e.g. not driven by climate or site factors). Thus, a three-year rotation length like that of the first rotation (2010 – 2013) seems optimum for sycamore to achieve high yields in the 10,000 and 5,000 trees/ha planting density (Fig. 3). Notably, there were no significant differences in the productivity of the 10,000 tph and 5,000 trees/ha. Therefore the 5,000 trees/ha may be a better option for economic returns, because a landowner/farmer would only use half of the inputs to establish the 5,000 trees/ha compared to the 10,000 trees/ha. 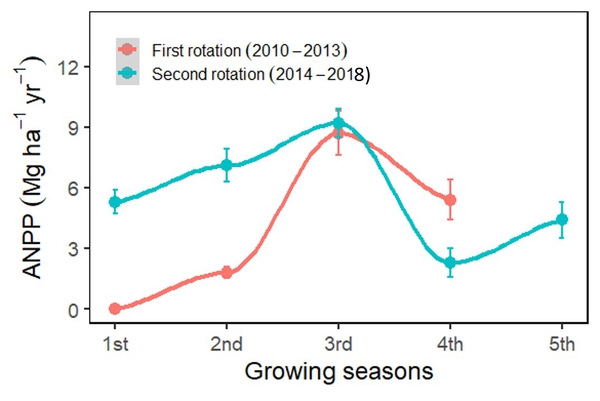 Figure 3. Average ANPP (Mg ha−1 yr −1) across the four planting densities for each growing season of the first and second rotations. In both rotations, there was a decline in productivity after the third growing season

Figure 3. Average ANPP (Mg ha−1 yr −1) across the four planting densities for each growing season of the first and second rotations. In both rotations, there was a decline in productivity after the third growing season

Research shows that the lowest planting density (1,250 tph) had the highest mortality after coppicing up to 15%, while the other three planting density treatments had minimal mortality (ranging from 1% to 5%) (Ile et al., 2021). In longer rotations, the impact of mortality may even out as the trees grow and occupy open growing space. Apart from the low mortality rates, sycamore produced competitive biomass with and without weed control, it produced 12 Mg ha−1 year−1 without weed control and 14 Mg ha−1 year−1 with weed control (Fischer et al., 2017). These results suggest the possibility of establishing sycamore without herbicide treatments and achieving good yield. Through anecdotal evidence, high litterfall with slow decomposition rates that covers the forest floor all round seasons have been observed in sycamore plantations. In addition to weed suppression, this leaf mulch may increase soil water retention, moderate soil temperature, reduce soil erosion, and possibly increase soil organic carbon and microbial biomass (Stanturf et al., 2001). The further suppression of weed may eventually decrease their seed bank, therefore providing environmental and economic benefits when the field is returned to agricultural farming.

The successful establishment of sycamore plantations on degraded and unproductive agricultural lands can help address the loss of natural timberlands and contribute to the growing demand of wood pellets in the southeastern United States. It provides an opportunity to diversify farm economies while providing alternative carbon futures, improve soil organic carbon, remove carbon from the atmosphere and ultimately enhance the environmental quality, biodiversity and carbon footprint of United States agriculture.