The corn earworm (CEW, Helicoverpa zea) and tobacco budworm (TBW, Chloridea virescens) are very similar. Both CEW and TBW have an egg, larva, pupa, and adult life stage. The female moths lay eggs on suitable host plants, usually near the fruit or flower (plant reproductive tissues). Once the larvae (or caterpillars) are mature, they drop into the soil and tunnel down to pupate. Larvae that pupate in the spring and summer emerge as moths the year they are born. Larvae that pupate in the fall overwinter as pupae in the soil and emerge the following spring. Both CEW and TBW have three to four generations per year in North Carolina.

The caterpillar identification typically requires magnification since caterpillars can appear be very similar. Larvae can be differentiated by the presence (TBW) or absence (CEW) of micro spines on the second and eighth abdominal segments (see YouTube video, Distinguishing Tobacco Budworms from Corn Earworms, for more detailed information on larval identification). Since these two species are so closely related, they tend to feed on very similar plant hosts, and as such have become a problem in industrial hemp crops across North Carolina. Observations throughout the southeast suggest that CEW is more common on hemp than TBW, but both can survive on the plant and have been observed feeding on it. 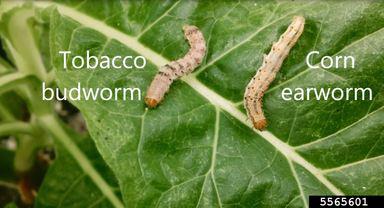 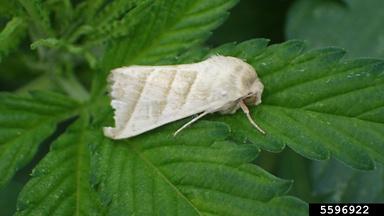 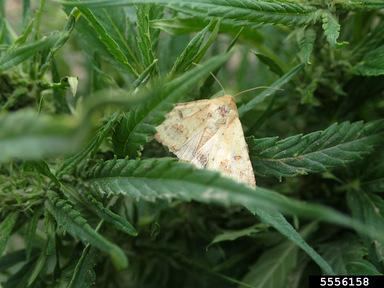 Skip to Damage in Industrial Hemp

Moths of both species are most attracted to flowering plants and do not appear to infest hemp prior to flowering. Corn earworm and tobacco budworm caterpillars bore into buds and blossoms. If reproductive tissue is not readily available, caterpillars will feed on foliar tissue. The feeding on reproductive tissue can cause terminal growth of foliage, leaf petioles, and stalks. In addition to direct feeding damage, there is concern that chewing injury may allow pathogens to grow in hemp buds as well, which is a significant concern in grain and flower production. 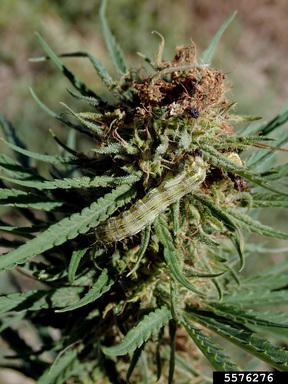 Corn earworm caterpillar and associated damage to the bud of a hemp plant.

Corn earworm caterpillar and associated damage to the bud of a hemp plant. 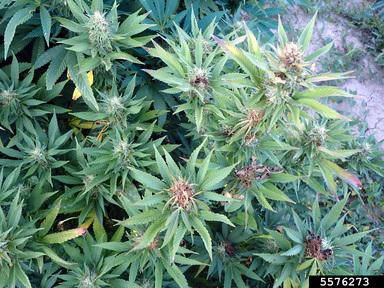 Extensive damage to hemp buds due to caterpillar feeding.

Extensive damage to hemp buds due to caterpillar feeding.

Start monitoring for corn earworm and tobacco budworm caterpillars when plants begin to flower, and visually inspect plants for injury. Look for signs of either species by looking for the larval frass (excrement), tunneling on the buds, and wilting of leaves and tissue.

Large cone-shaped traps baited with sex pheromone lures are commonly used to capture both corn earworm and tobacco budworm moths at the start of the growing season. The moths collected in these traps can be used to determine which pest is present. Research is currently underway in the southeast to determine how effective pheromone traps for use in predicting caterpillar damage in hemp.

As industrial hemp is a relatively new crop in North Carolina, no research has been done to determine the threshold for concern. Further investigation is needed since the hemp crop is grown for different markets (i.e. fiber, seed, CBD). 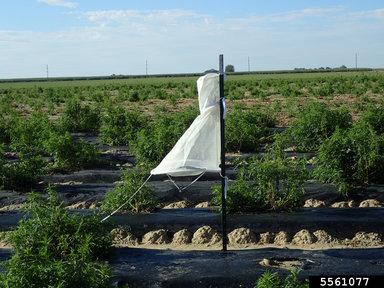 Disclaimer: The following recommendations have been known to work in other plant systems, however, their effectiveness in hemp needs further investigation. We are developing a table for industrial hemp materials in the North Carolina Agricultural Chemicals Manual, but for the time being the Industrial Hemp portal is the best resource for up to date information. As laws and regulations are constantly changing in regard to hemp check with your local extension agent with any label or regulatory concerns.

Insecticides registered in hemp are limited. The only conventional insecticide for these caterpillars currently EPA registered for use in hemp is Prevasyn Insect Repellant / Insecticide which is an insect growth regulator (IGR). IGR’s work by preventing the caterpillar from developing properly. There is no efficacy data on this material in industrial hemp, and it not widely used in other crops where CEW and TBW are pests.

Pre-planting soil preparation and destruction of weeds with herbicide or mowing have been known to destroy most overwintering pupae in the field. Continued weed control can reduce the food availability for the caterpillar and can reduce population sizes of both species later in the year. However, moths can migrate from nearby areas throughout the season.

The information in this factsheet was developed with support from the North Carolina Tobacco Trust Fund Commission.