The cypress flower gall midge, Taxodiomyia cupressi, emerges in early sping. Females lay their eggs on newly developing cypress needles, and their maggots feed and cause the needle to form a small, white, flower-like gall inside of which the maggot develops. Their galls resemble tiny narcissus flowers with a broad corolla and a small ring of tissue at the base that somewhat resembles narcissus petals. The wide end of the corolla is concave, often with a linear depression across the middle. These galls are snow white but gradually darken to pink, tan, and then brown. The maggots mature and probably pupate inside the galls. It is likely that we have only one generation per year in North Carolina. 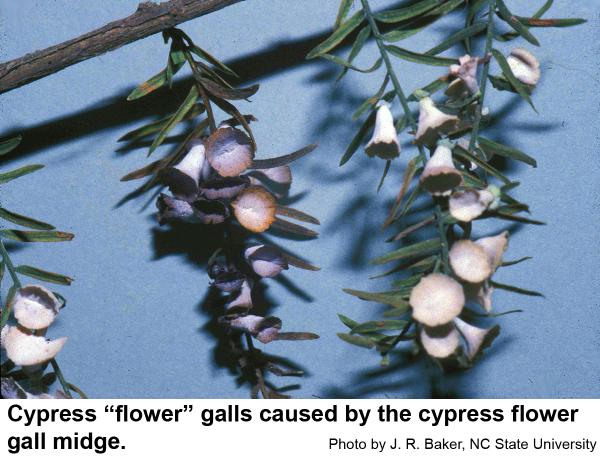 Cypress flower galls are caused by a tiny midge.

Cypress flower galls are caused by a tiny midge.

Bald cypress and pond cypress seem to be the only host plants of the cypress flower gall midge.

By the time cypress flower galls are noticed, it is too late to control the midges. As these galls do no discernible damage to the health of cypress trees, we suggest it is better just to admire the flowers than to vainly apply an insecticide. Insect populations vary greatly from year to year and place to place, and because gall midges are plagued with parasites, it is likely an infested tree will have very few "flowers" next year.