Extrusion Processing: A Versatile Technology for Producing Foods and Feeds

Overview – What Is Extrusion?

Skip to Overview – What Is Extrusion?

The word extrusion means shaping a material or a blend of materials that can be plasticized (able to be melted and become fluid-like), and is pumpable by forcing through a restricted opening or die.

Of course, as with any technology, this technology also requires knowledge of raw materials, processes, and process controls arising out of interactions between the ingredients and the equipment.

Extrusion processes are mainly utilized in producing human foods rather than animal feeds, except for pet foods (dog and cat food). This process is also used for manufacturing aquatic feeds and some types of horse feeds. In contrast, the majority of the feeds used in animal agriculture or for livestock are processed in a feed pellet mill, since pellet mills have a higher production rate than extruders with the same capacity of drive motor. This makes the pelleted feeds less expensive than extruded feeds.

The similarity between pellet milling and extrusion is that both use steam, pressure, and temperature to modify the raw material and use a die for shaping the product. However, pellet mills use dies with long land lengths and form the pellets in dense form by using compression force. Pellet binders are needed in most cases to conserve the integrity of the pellet.

In extrusion, the die has a shorter land length and does not need binders to create an intact product. In fact, the thermomechanical conditions inside the extruder completely gelatinizes the starch and it expands upon exiting the die. Starch acts as the binder in extruded products. Extrusion plays a crucial role in creating value-added products from by-products of the meat and seafood industries as well as those from crop agriculture.

The concept of extrusion was inspired by the Archimedean screw (or the screw pump), in which turning a screw inside a pipe is used to transfer water from low-lying water bodies into irrigation channels.

Dry pet foods were manufactured with extruders in the 1950s. Incredibly, the versatility of this technology was further enhanced by the introduction of twin-screw extruders (TSE) in the 1970s. TSEs had a more comprehensive range of operation; they handled a broader array of raw material particle sizes and had better conveying characteristics, especially for formulations that were difficult to run on SSEs.

The cross section diagram of a simple SSE is courtesy of Galen Rokey, used by permission. 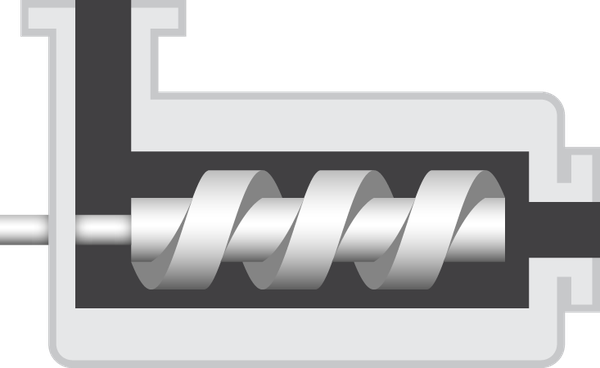 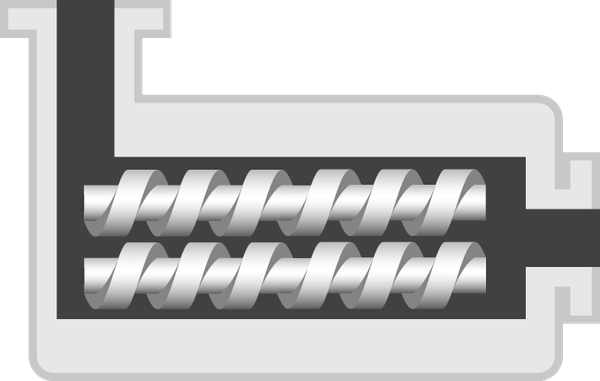 The extrusion system generally consists of

Some other equipment may be needed upstream and downstream of this processing line depending on the type of product being manufactured. Some of the upstream equipment may include hammer mills and ribbon blenders. The downstream may include driers and coolers for drying the extruded product to the desired moisture content and then cooling it before sending it for packing and coating and mixing equipment for external applications of flavors, colors, palatants, etc.

In the animal feed sector, pet foods (low and high moisture), aquatic feeds (floating and sinking feeds), and some types of horse feeds are produced using this technology. Although the majority of livestock feed is made using a pellet mill due it being an economical process, pet foods and aquatic feeds are extruded. Generally, livestock are reared for business purposes and it’s important to keep prices low; pellet mills helps keep feed costs low.

Pet foods are extruded because pet owners consider these foods to be close to human foods and are willing to pay a higher cost for foods that are durable, nutritious and microbiologically safer. Additionally, pet foods come in many shapes and colors which is possible with extrusion processing.

Aquatic feeds are extruded because different types of fish need feeds of different buoyancy based on their eating preferences. Extrusion processing can produce such feeds – floating, slowly sinking, and sinking feeds.

Whether SSE or TSE, the underlying process remains the same – screw(s) rotate inside a fixed tube called a barrel. Mechanical energy is provided by the rotation of screws, and thermal energy is supplied by steam injection or through barrel heating.

The versatility of this high-temperature, short-time process is in its ability to act as a bioreactor. The unit operations (such as the mixing, conveying, etc. mentioned above) inherent in extruders affect the raw material and thus influence the final product characteristics.

The farinaceous (starch-containing fraction) and proteinaceous (protein fraction) components of raw ingredients (generally cereals and tubers) undergo physicochemical changes in the presence of heat and shear. The heat and shear initiate many types of chemical reactions which primarily include starch gelatinization (or cooking of starch), protein denaturation, enzyme deactivation, reduction in anti-nutritional factors, and improvement in microbial safety.

The entire matrix melts into a viscous fluid that is conveyed to the die. It exits the die as an expanded product (a product that expands or swells in size after exiting the die). Thus, these products have a larger diameter than the die opening and has a porous body with low bulk density (in most cases). Formulations containing high moisture, oil, fiber etc. do not expand and thus form dense products (sinking aquatic feeds, 3rd generation snacks, rice analog, etc.).

These changes are irreversible and lead to products with entirely different functional properties. The expansion of the extrudate can be manipulated to suit the final product characteristics by changing the formulation and/or process parameters. This allows the manufacturing of both expanded and dense products.

An example would be the aquatic feed – floating feeds are more porous than sinking feeds (which are dense) and the same equipment can produce both products. Further, the ability of the process to melt the raw materials gives greater flexibility in modulating the physical characteristics of final product.

Generally, the melted and cooked starch acts as a binder and the extrudates are physically intact, leading to making a wide range of foods and feeds. Being a continuous process, with low floor space requirements, the process is economical and has a lower environmental foot print (due to low use of water and generally no effluent generation).

Extrusion processing has become a well-used and mature technology as far as its application in foods and feeds are concerned. The versatility of this processing method has led processors to incorporate newer ingredients and functionalities to create products that are cost-effective and nutritious.

Being an efficient and environment-friendly process, extrusion technology will continue to explore new areas of application, which will further add to its versatility.