In North Carolina, firewood is important as a heat source and for recreational uses. However, it can also pose a significant threat to the health of our forests. That’s because tree-killing insects and diseases can easily and inconspicuously hitchhike in or on firewood. Natural dispersal of insects and pathogens can be limited for many invasive pests, but moving infested firewood can allow them to travel hundreds of miles in just a few hours or days. Through firewood, invasive pest ranges can rapidly expand, also expediting the ecological and economic losses that accompany them. To reduce the unwanted spread of invasive pests, firewood should be burned within 50 miles of where it was cut and if possible, within 10 miles.

Reality of the Threat

Skip to Reality of the Threat

Insects harbored within firewood is an accepted idea with more than ten scientific papers documenting the fact. A study by Jacobi et al. in 2012 found 47% of purchased firewood bundles harbored live insects. In another study by Haack et al. (2010), 23% of firewood confiscated at an emerald ash borer quarantine boundary was infested with live boring insects. The list goes on and the reality is not only documented in studies, but is evidenced by the long-range dispersion jumps of some invasive species. 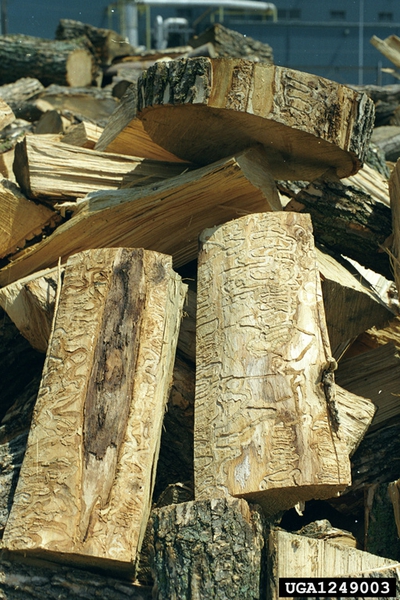 Firewood can harbor invasive species and help them get from place to place. With the bark removed from this firewood, galleries created by the emerald ash borer are visible.

Firewood can harbor invasive species and help them get from place to place. With the bark removed from this firewood, galleries created by the emerald ash borer are visible.

Firewood that is heat treated or kiln dried in facilities inspected and approved by the North Carolina Department of Agriculture & Consumer Services (NCDA&CS) Plant Industry Division are generally considered safe for moving, as hidden threats should have been killed during the treatment process. However, while treated wood is generally considered safer to move, it’s not a guarantee. Goebel et al. (2010) found emerald ash borer emerging from cut wood following heat treatment. Therefore, the best practice is to burn locally-sourced firewood followed by treated firewood.

Using safe firewood when camping is not only responsible to protecting forest resources, but may be required. In North Carolina, all National Parks and many State Parks require firewood to be heat treated to enter the park. 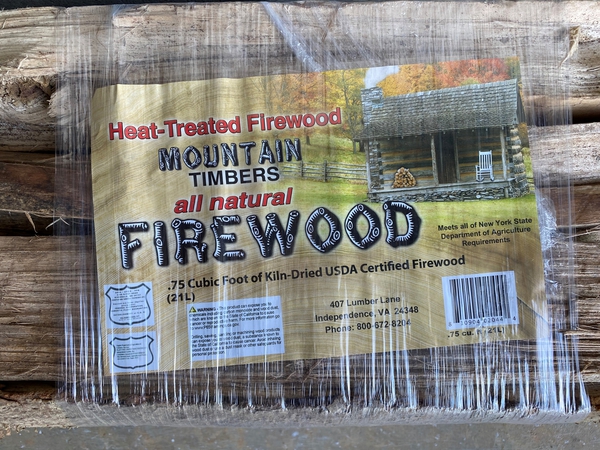 Kiln-dried firewood is often sold in bundles. The USDA seal which certifies the kiln in which this wood was dried is visible in the lower left corner of the label.

Kiln-dried firewood is often sold in bundles. The USDA seal which certifies the kiln in which this wood was dried is visible in the lower left corner of the label.

Moving firewood long distances is highly discouraged and in some cases, may be illegal. When quarantines regulating firewood are in place, it is unlawful to move pieces of wood four feet in length or less across quarantine boundaries without appropriate procedures (e.g. inspection, debarking, chipping, etc.). In some cases, a compliance agreement with NCDA&CS.

Currently in North Carolina, there are quarantines in place that regulate the movement of firewood in Currituck and Dare counties for Lymantria dispar (formerly known as the 'gypsy moth') and in Haywood County for thousand cankers disease. Quarantines are typically associated with specific pests and are therefore accompanied by a unique set of guidelines. To get up-to-date information about quarantines that regulate the movement of firewood or to establish a compliance agreement, contact the NCDA&CS Plant Industry Division at 800-206-9333 or newpest@ncagr.gov.

The greatest challenge in mitigating the spread of invasive species via firewood is likely the awareness of the general public. The Nature Conservancy’s ‘Don’t Move Firewood’ program works across the country and supports partners in getting the message out. Many states have their own programming encouraging citizens to do the same. Surveys by The Nature Conservancy indicated that 81% of participants were unaware of regulatory measures inhibiting firewood movement and 61% could not recall seeing campaign materials related to firewood movement and invasive species 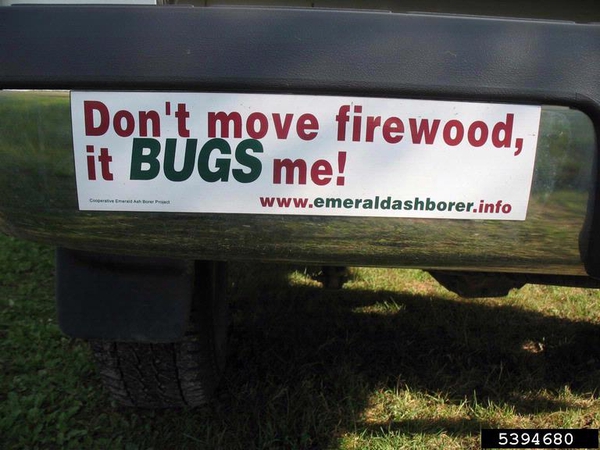 Campaigns across the nation aim to raise awareness for the threat of moving firewood.

Campaigns across the nation aim to raise awareness for the threat of moving firewood.

What Should You Do?

Skip to What Should You Do?

Whether you use firewood as a heat source or recreationally, always consider its source. Try to use locally-harvested or treated firewood when possible. If you are camping, call the campground before your arrival to see if they sell local firewood, can recommend a local vendor, or allow downed wood to be harvested on site. Often, gas stations or grocery stores sell packaged, heat-treated firewood, but this is generally more expensive than locally-sourced firewood. When leaving the campground, do not take any leftover firewood or other wood items collected during the trip (e.g., hiking sticks) with you. Continue to spread to word and encourage those around you to do the same to further protect the beauty of our forests for generations to come.