The moth of the Florida fern caterpillar, Callopistria floridensis, is an attractive brownish insect with variegated wings. The forewings have a dark-reddish-brown triangle on the outer margin and a pale chevron at the tip. The ends of the forewings are somewhat ragged. The wingspan is just over 1 inch. The legs are conspicuously tufted, especially in the males. Female moths tend to be darker than males. The pupa of the Florida fern caterpillar is reddish-brown and cylindrical, tapering toward the hind end and is about 3/4 inch long. There are two minute, outcurved spines at the hind end. The pupa occurs inside a cocoon that is usually covered with particles of soil and dead or cut leaflets. The eggs are slightly flattened spheres covered with tiny longitudinal and transverse ribs. They are pale green with a yellow tint and are less than 1/32 inch wide. The Florida fern caterpillar has five color forms: a light-green forms; a green form with an upper white line and a lower black line down each side; a form with the upper and lower white and black lines down each side plus black spots on the back and upper sides; a velvety dark-striped or black form; and a velvety dark-striped or black form with a white line down each side. Sometimes green worms occur with thin, pale, yellow stripes on the back and bold, white stripes on each side. The caterpillars grow up to 11/4 inch long when mature.

The eggs are laid singly under fern leaflets near the tips. Females averaged 465.4 eggs each in one study. The eggs hatch in 5 to 7 days, and the tiny new caterpillars feed on the tender new leaflets mostly at night. As the caterpillars mature they usually hide on the stems at the base of the plants or in the soil during the day. Most of the larvae develop through five stages although some female larvae may develop through six stages. In about 36 days the caterpillars mature and spin a cocoon on the soil surface to pupate. Twelve to 16 days later (almost 4 weeks in cool weather), a new generation of moths emerges to mate and lay eggs. Development is probably slower in winter months at northern latitudes as the caterpillars seem to do little damage during this period. In tropical areas, Florida fern caterpillars are most damaging in dry seasons. The moths are nocturnal, hiding under benches or other dark locations during the day. The moths live about 10 days. 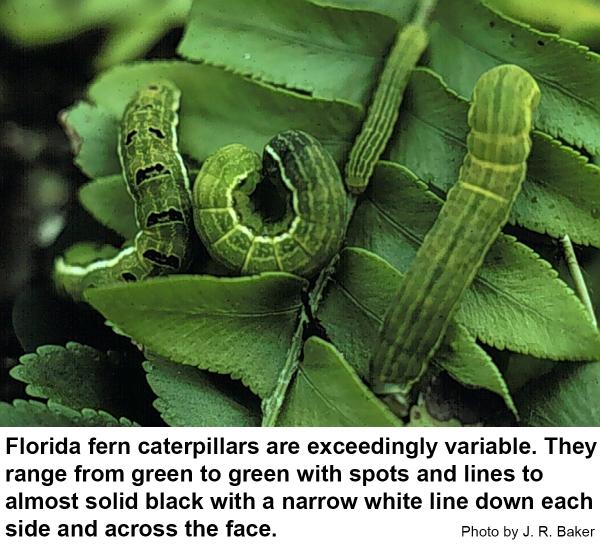 Florida fern caterpillars are quite variable.

Florida fern caterpillars are quite variable. 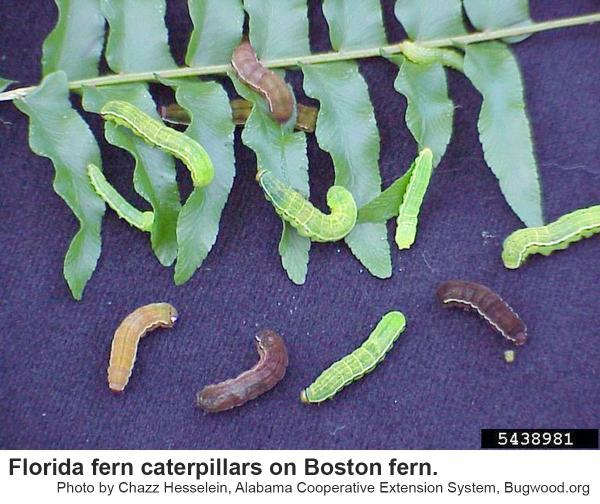 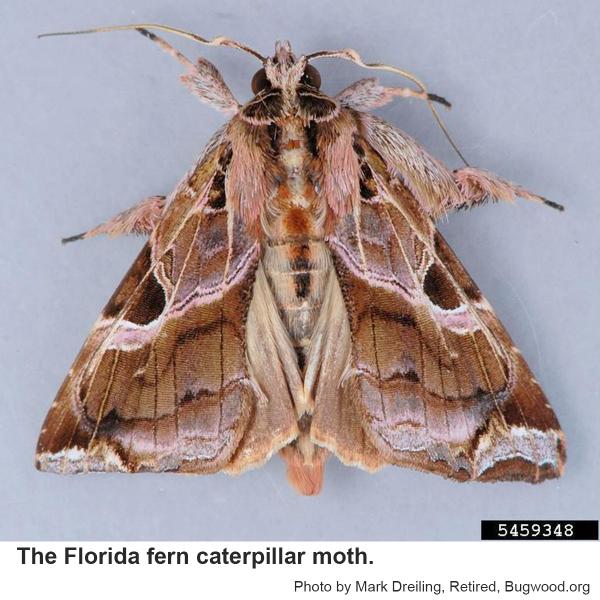 The Florida fern caterpillar moth is about 5/8 inches long.

The Florida fern caterpillar moth is about 5/8 inches long.

The Florida fern caterpillar has been reported to feed primarily on ferns (at least 14 species) including maidenhair fern (Adiantum sp.), Boston fern and other varieties of sword fem (Nephrolepis exultata), holly fern (Cyrtomium), table ferns and silver fern (Pteris spp.), rabbit's foot fern (Polypodium spp.), and Blechnum spp. Asparagus sprengeri has also been reported as a host. Florida fern caterpillars are active feeders; several caterpillars may damage a plant severely. The caterpillars tend to feed on the most tender foliage, but larger caterpillars will feed on tougher leaves and tender stems. The caterpillars often chew off more plant material than they consume.

Because ferns are sensitive to many pesticides, especially liquid formulations, it is better to dust infested plants with carbaryl (Sevin) insecticide whenever caterpillar doppings (frass) are noticed under a fern. Shaking the fern can dislodge many of the caterpillars so that they may be trampled under foot.