The quality of a forage for livestock is ultimately determined by its impact on animal performance. Thus, forage quality is evaluated in terms of the amount of milk produced, animal weight gains obtained, reproductive efficiency, and other animal responses. Common terms when referring to forage quality relative to the above respective animal responses are “milk in the bucket,” “pounds on the scale,” or “calves on the ground.”

To better allocate forages to groups of animals with different nutritional needs, to assess the marketable value of forage crops, or to formulate supplemental diets, producers need to send forage samples to a laboratory to obtain analyses of each sample’s nutrient concentrations and estimates of digestibility. Both measurements are estimates of the nutritive value of the forage. Nutritive value analyses (Figure 1) are useful in providing a first assessment of the relative potential of a forage to impact animal performance. Animal performance, however, is also affected by other factors, such as palatability, anti-quality constituents, and the amount of forage consumed by the animals (intake).

In this publication, we describe the factors that affect forage quality and discuss prediction indices that can be used to assign a science-based measure of quality to forages. 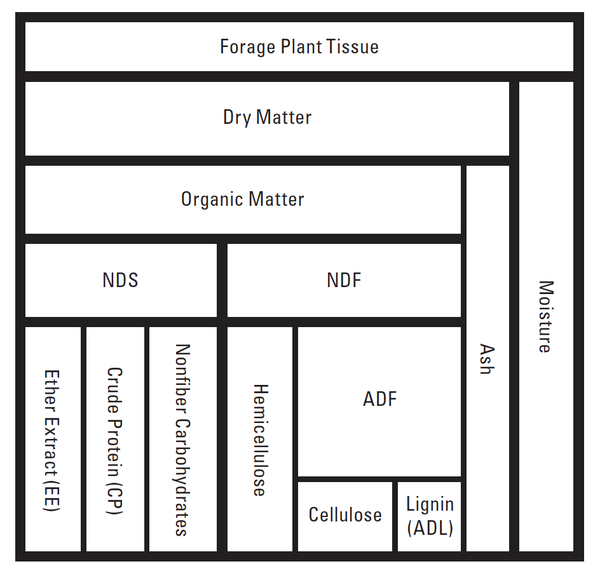 The nutritive value of forages is assessed by measuring nutrient concentration and digestibility and by studying the nature of the end products of digestion. The three major nutrients found in forages are carbohydrates, proteins, and lipids, as described below.

Nonstructural carbohydrates: These consist of a group of different types of sugars (e.g., sucrose) and reserve carbohydrates (starch and fructans). Starch is present in all forages, but fructans occur only in cool-season grasses. Starch can be found especially in seeds and roots. Fructans are located in leaves and stems, especially in the lower parts of the plant. As long as these carbohydrates are accessible to rumen microbes (through mastication or seed processing), they are rapidly and completely digested.

Structural carbohydrates: The plant cell wall is comprised of cellulose, hemicellulose, lignin, pectin, β-glucans, and polysaccharides. Lignin is a noncarbohydrate component of the cell wall that is formed by phenolic compounds and has a negative impact on digestibility. Detergent fiber analysis divides plant cell walls into neutral detergent fiber (NDF), acid detergent fiber (ADF), and acid detergent lignin (ADL). The NDF fraction encompasses cellulose, hemicellulose, and lignin. Pectin and β-glucans are not included in the NDF fraction and they are rapidly and thoroughly digested by microorganisms in ruminants. The ADF fraction encompasses cellulose and lignin; but if not analyzed sequentially after NDF, this fraction may contain some pectin contaminants, especially in legumes. Finally, the ADL fraction represents lignin.

Proteins are polymers formed by amino acids. Protein concentration is typically analyzed as crude protein (CP), which is a measure of the total concentration of nitrogen (N) multiplied by 6.25 to estimate total protein concentration in the sample. In forages, nonprotein nitrogen (NPN, which includes free amino acids and ammonium compounds) typically represents 10% to 20% of the total N, but this proportion can increase during wilting and especially if the material is ensiled (Hatfield et al., 2007). The NPN can be turned into bacterial protein in ruminants, but it has little or negligible nutritive value for swine and poultry. Total crude protein is typically greater in legumes (15% – 25%) compared with grasses (10% – 20%), and concentrations usually decrease as plants mature due to the accumulation of the fiber fraction (Hatfield et al., 2007).

Lipids are organic compounds that are relatively insoluble in water but soluble in organic solvents such as ether (ether extract or EE). Lipids are the most energy-rich fraction, typically containing 2.25 times more energy than either carbohydrates or proteins. The most relevant lipids in animal nutrition are fatty acids, triglycerides, and phospholipids. Fatty acids typically constitute 1% to 3% of forage dry matter (DM), with the majority being polyunsaturated (Hatfield et al., 2007). Most unsaturated fatty acids will be modified by ruminal microorganisms and become saturated in the rumen. Lipids are typically measured as ether extract, but this measurement also includes lipids of no nutritional value (such as waxes and terpenes). In general, fatty acids represent only 50% or less of ether extract in forages (Hatfield et al., 2007). Table 1 describes the nutritional composition of the main forages fed to livestock in North Carolina.

Digestibility is the breakdown and absorption of nutrients in the gastrointestinal tract of animals. The most direct measurement of digestibility is conducted with an animal (in vivo) by measuring DM consumed and DM excreted. Then, the proportion of DM that disappeared is assumed to have been digested. Obtaining digestibility data using animals is expensive (in vivo digestibility). However, alternative methods have been developed in the laboratory (in vitro) to estimate digestibility (referred to in the literature as either in vitro DM digestibility or disappearance). Digestibility is always highest in young immature plant tissue and lowest in mature plant tissue. Broadly, DM digestibility is usually lesser in warm-season forages (45 – 66%), intermediate to greater in cool-season forages (49 – 81%), and greatest in legumes (67 – 81%) (Collins and Fritz, 2003). The in vitro disappearance of NDF (IVNDFD) has been identified as a major predictor of animal performance in lactating cattle (Oba and Allen, 1999). A one-unit increase in IVNDFD is associated with 0.37 lb/day increase in DM intake and 0.55 lb/day increase in 4% fat-corrected milk (Oba and Allen, 1999). The response is especially noticeable with more productive cows. Thus, forages with greater IVNDFD should be allocated to the most productive animals.

Unfortunately, intake is the forage attribute most difficult to measure because actual intake is a function of forage characteristics (i.e., palatability, physical properties, and nutrient availability), animal characteristics (i.e., capacity, appetite), and management (i.e., feeding, stress). Nevertheless, NDF concentration and IVNDFD can be used to predict intake. The IVNDFD has been shown to be not only a good predictor of intake, but also related to milk production (Oba and Allen, 1999).

Palatability is the characteristic of a feed affecting its acceptability by animals. When given free-choice access to forages, animals can select one forage over another or parts of the same forage based on plant characteristics such as smell, texture, moisture content, height and density of sward, infestation, color, and taste. Thus, palatability can also affect the rate at which animals consume forages. Greater quality forages are generally very palatable.

Several compounds can be present in forages that affect animal performance, cause sickness, or possibly cause animal death. These include such compounds as alkaloids, tannins, and phytoestrogens in many legumes, nitrates in many grasses, and cyanoglycosides in white clover and sorghum, as well as mycotoxins in many forages. The presence and concentrations of these compounds vary among plant species (including weeds) and are often influenced by environmental factors and animal sensitivity. For example, elevated concentrations of tannins can reduce intake and rumen digestibility. But in relatively reduced concentrations, condensed tannins can be beneficial by increasing bypass protein. In general, forages of desirable quality should not have these compounds. Or if these compounds are present, they should be at reduced concentrations that do not negatively affect animal responses. 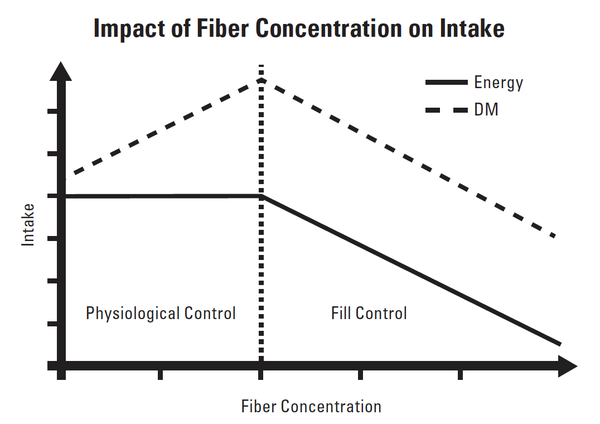 Two systems have been developed to express forage quality in terms of an index that combines both intake and digestibility. The relative feed value (RFV) index was developed by the American Forage and Grassland Council (Rohweder, 1978), and the relative forage quality (RFQ) system was developed by Moore and Undersander (2002). The RFQ system was developed to overcome the limitations of RFV, particularly its limited ability to compare among forage families and its inability to update prediction equations. This was achieved by introducing IVNDFD in the calculations and using total digestible nutrient (TDN) equations.

This index ranks forages relative to the digestible dry matter intake (DMI) of full-bloom alfalfa (assumes 41% ADF and 53% NDF with an RFV of 100 at this growth stage).

For grasses (warm- and cool-season):

The RFQ is especially advantageous over the RFV index when evaluating grasses and grass-and-legume mixtures compared to legumes. In both systems a 100 value represents roughly a full-bloom alfalfa. The greater the index, the better is the forage quality. Calculation of RFQ requires values of NFC, FA, NDFn, NDFD, and NDFDp added to the list provided in Table 1 compared to calculating RFV. Based on the RQF values of alfalfa (165.9) and bermudagrass (80.2) (Table 2), alfalfa hay in this example should be fed to early lactation cattle to take advantage of its excellent quality (Table 3). On the other hand, the bermudagrass hay used has a very low quality and should be fed to animals on maintenance. It is important to clarify at this point that RFQ should not be used to formulate a ration, but instead to assess if a forage source will be an adequate base for the diet of the target animal. If greater levels of animal performance are desired than what the forage allows as a sole source of feed, then additional supplementation will be needed to overcome the limitations of the lesser forage RFQ values. It is recommended, however, that producers evaluate the economics of such a practice.