The giant bark aphid, Longistigma caryae, is the largest aphid we have in North Carolina. Wingless giant bark aphids are light gray with four rows of black spots down the back. Aphid populations often increase dramatically because they reproduce parthenogenetically. Nymphs of some of these aphids develop into winged adults and fly to new areas from time to time. The wings are translucent gray. In fall, nymphs develop into males and special egg-laying females that mate. The females then lay their eggs along twigs of various hardwoods. The winter is spent as a black, shiny eggs. Next spring, the eggs hatch and the giant bark aphids reproduce as females that give birth to females until the last generation of males and females develops in the fall. 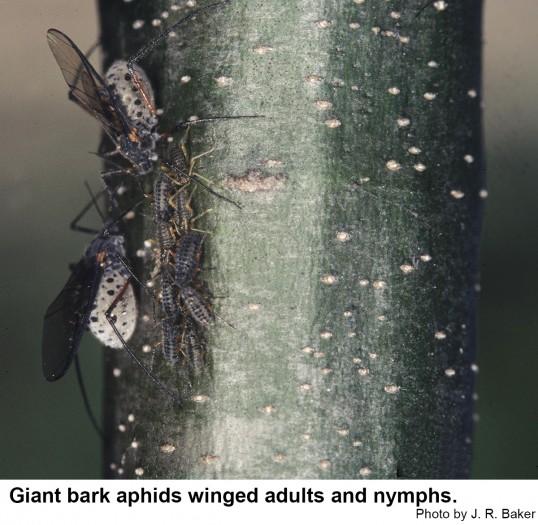 Winged adults and nymphs on bark.

Winged adults and nymphs on bark. 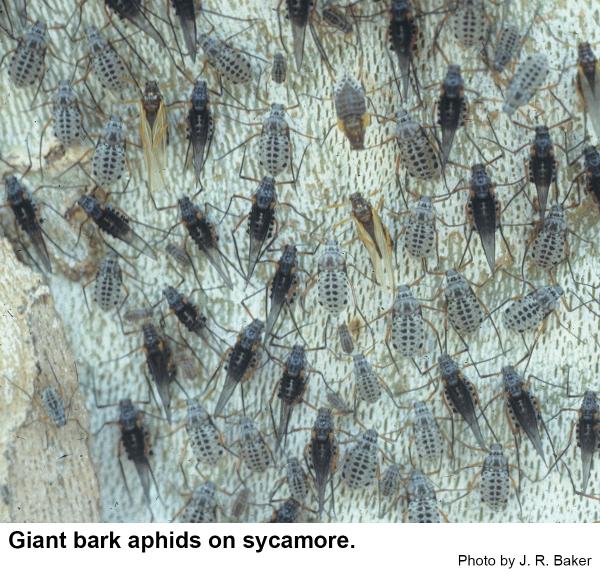 Giant bark aphids feed through the bark of twigs and branches.

Giant bark aphids feed through the bark of twigs and branches. 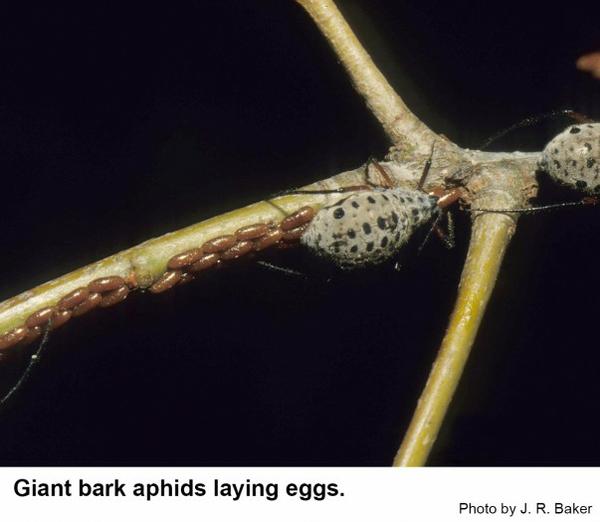 Giant bark aphids feed on basswood, hickory, oak, pecan, sycamore, walnut, and wax myrtle. They feed by inserting their microscopic, threadlike mouthparts right through the bark into the phloem tissue. They suck out sap rich in sugars but relatively poor in other nutrients. To get a complete diet, these insects suck out large quantities of sap and excrete the excess sugars and liquid as honeydew. Giant bark aphids sometimes excrete copious amounts of honeydew. Dark fungi called sooty molds often grow in honeydew. Sooty molds may become so abundant that infested plants appear dark and sooty or almost completely charcoal gray. Sunlight is shaded out to the point photosynthesis is no longer possible. Heavily coated leaves often die. The combination of feeding by a large number of aphids and the heavy coating of sooty molds may drastically reduce the vigor and beauty of trees.

Because aphid populations are often ephemeral and unpredictable, it is probably not worthwhile to try to kill the eggs using one of the horticultural oils during the winter. Parasitic wasps, lady beetles, syrphid fly maggots, lace wings and other predaceous insects feed on aphids so that aphid populations often decrease rapidly. In addition, aphid populations are sometimes devastated by Verticillium lecanii, a fungus that infects aphids as a sort of super deadly athlete's foot as well.

Although the fungal strands of sooty molds do not parasitize plant tissue, they often cling tightly to the surface. Even after the source of honeydew is eliminated, sooty molds may adhere to plants and other objects for months afterwards. To help reduce sooty molds, first control the aphids (or other insects) that excrete honeydew. There is some advantage to using horticultural oil for control of aphids because oils tend to help loosen sooty molds from the plant surface and thus hasten the weathering away of the fungi (horticultural oils are formulated by many companies and are available from garden centers, hardware stores and nurseries).