Grain pea has been produced on the North Carolina/South Carolina border over the past several years by a pocket of growers around Lumberton, North Carolina (Figure 1). A dry pea with a green or yellow seed coat (Figure 2), it is shelled for human or animal consumption. Grain peas are high in protein and also low in trypsin inhibitors and therefore do not require heat treatment when used as animal feed. Multiple buyers in the Southeast are interested in grain peas for inclusion in traditional animal feed, grain-free dog food, and food-grade products. The alternative to locally sourced peas for regional end users is peas shipped via rail from the Northwest.

One of the biggest advantages of incorporating grain peas into North Carolina growers’ rotations is the unique time frame in which they are produced; planting occurs from December through January, and harvest occurs in late May or early June. This window offers an opportunity for our producers to plant a crop other than small grains after other field management operations have concluded in late fall. Such diversification from traditional winter grain crops can help alleviate some of the pest-management problems associated with continuous small grain production. Peas are a legume, similar to soybeans, and can provide some residual N benefit to the subsequent cash crop. Also, North Carolina producers can grow peas with minimal investment in new equipment, as the peas are planted with a grain drill and can be harvested with the soybean sieves on a combine.

The disadvantages of producing grain pea in our state include (1) difficulty establishing the crop during December and January due to prolonged wet conditions and disease pressure, (2) close proximity of average yield and break-even yield, and (3) lack of stable markets.

Local growers had been producing this crop largely through trial-and-error before NC State Extension began conducting targeted applied research to answer production questions. If stable markets emerge, we want our growers to already have the foundational agronomic information necessary to grow this crop successfully (Figure 3). Growers identified the most important production topics that needed to be addressed through research to help optimize production, which included planting date, seeding rate, and variety selection. We have not been able to research many other topics yet in North Carolina, though we have obtained anecdotal information on those topics from our growers and colleagues in other parts of the United States. 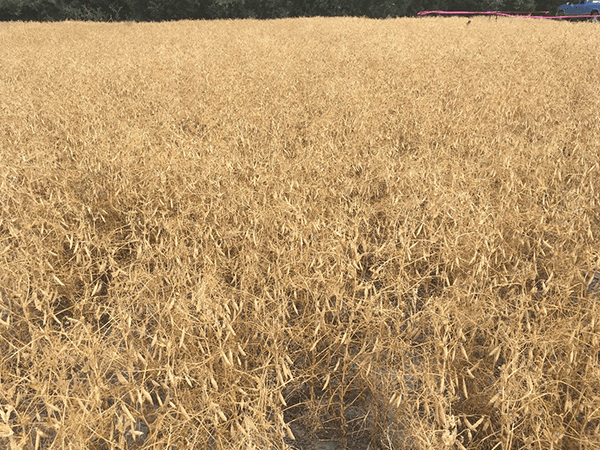 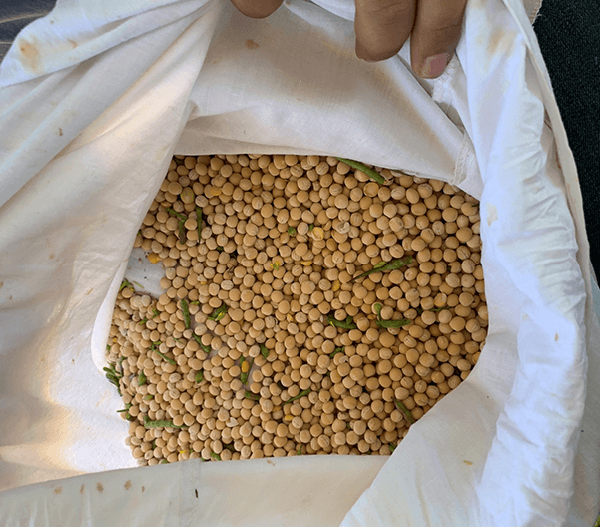 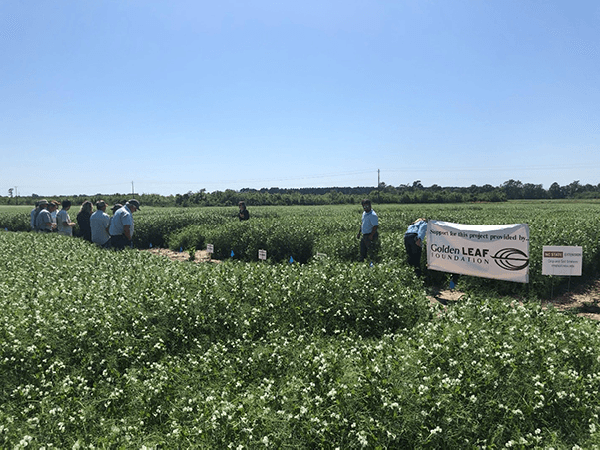 The time frame in which grain peas are planted (from December to mid-January) is one of the most desirable aspects of producing this crop in North Carolina. In an effort to discover optimal planting times, we evaluated pea planting dates from early December through mid-March in 2018 and 2019 at four locations (Clayton 2018, Clayton 2019, Kinston 2019, Rocky Mount 2018). We then characterized planting dates and locations in growing degree days (heat accumulation) from planting to harvest and the impact on grain yield. Following are our primary takeaways on planting dates. 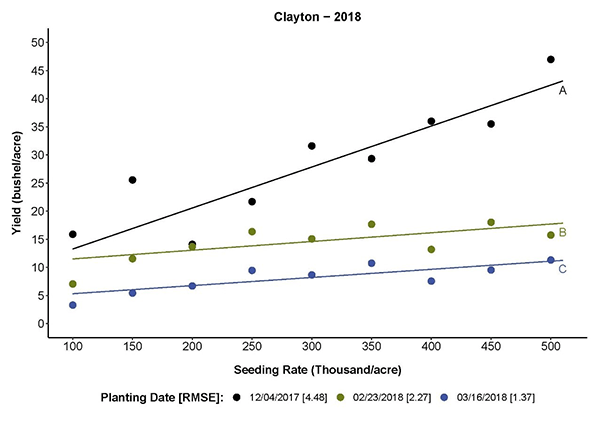 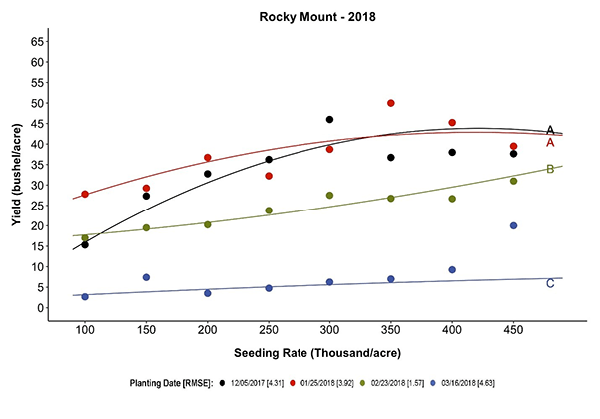 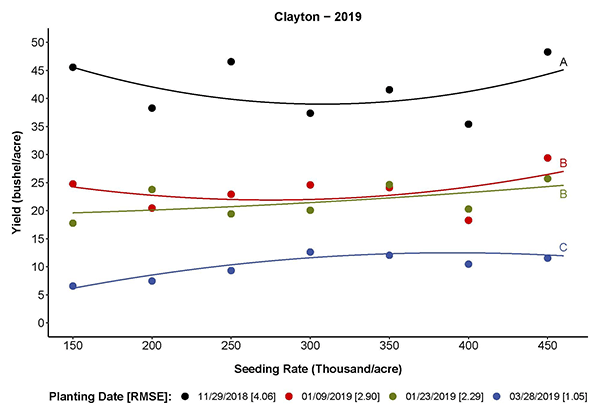 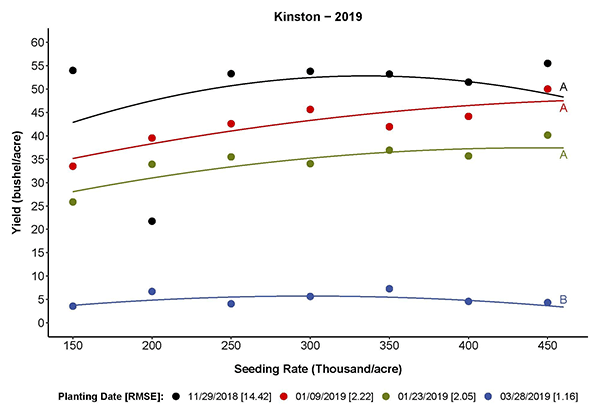 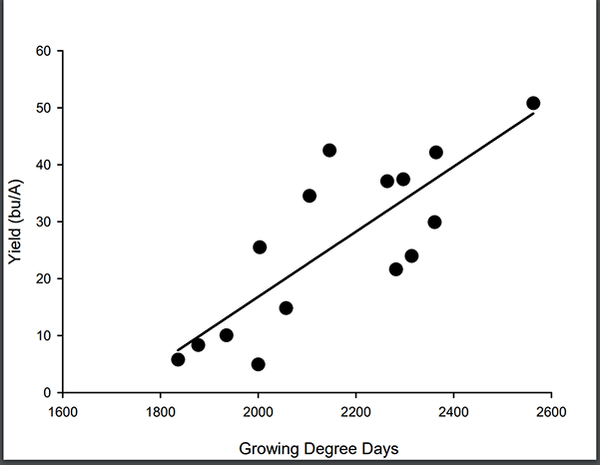 Peas can be planted into clean-till or no-till situations in North Carolina. Seed is the largest input cost for pea production here. Peas can vary considerably for seeds/lb, from 1,500 to 6,000, so a population target is used to determine seeding rate. In other US regions, the recommended seeding rate for peas is to target 300,000 to 320,000 live plants/A. We investigated seeding rates from 100,000 to 500,000 seeds/A in 2018 and 2019 to determine if we needed to employ seeding rates targeting 300,000 to 320,000 live plants/A to optimize yield in North Carolina (Figure 4, Figure 5, Figure 6, and Figure 7). In earlier planting situations, yield tended to plateau at 300,000 planted seeds/A, which indicates that growers in our state may be able to plant slightly less seed/A than in other US regions and still optimize yield. With later planting dates, more seed was often needed to optimize yield.

We have not conducted research on whether a seed inoculant or fungicidal seed treatment is necessary in grain peas in North Carolina; however, we suspect that using both treatments will likely protect yield. Peas are a legume that fixes nitrogen, but they use a different species of bacteria for N-fixation than soybeans or peanuts. Since pea production is uncommon in North Carolina, it is unknown if the necessary bacteria are present in the soil for optimal N-fixation without inoculation.

Based on recommendations from across the United States, peas are best planted with narrow row spacing (<10 in.). Planting in narrow rows allows the peas to use their tendrils to hold each other upright, keeping the plants from touching potentially cold, wet ground (Figure 9). Narrow rows also help peas outpace winter and spring weeds by facilitating rapid canopy closure. 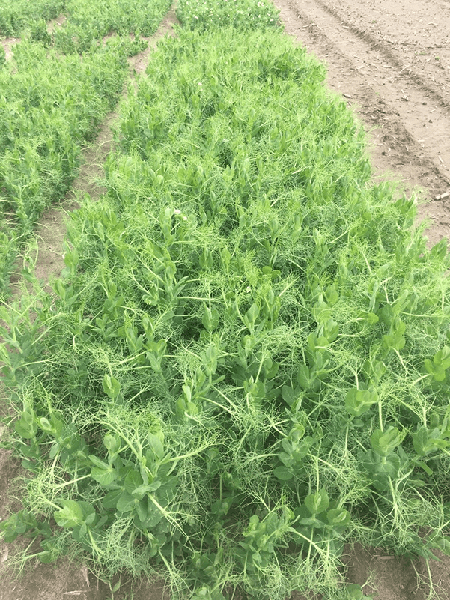 Before we began investigating grain peas at NC State, growers in our region were producing only one pea variety (‘ESO’), so they had no information about the comparative potential performance of other varieties here. In 2018 and 2019, we compared available varieties from around the United States for yield and other agronomically important characteristics at several sites in North Carolina and South Carolina (Figure 10; Tables 1, 2, 3, 4, and 5). Even if superior varieties are identified for yield and other agronomic traits, local seed production is limited. Importing seed from the Northwest via rail can be economically impractical. The following list describes the primary results on pea variety characteristics from our trials. 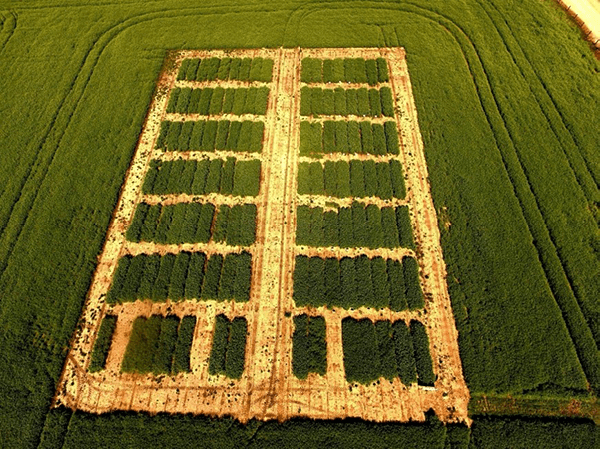 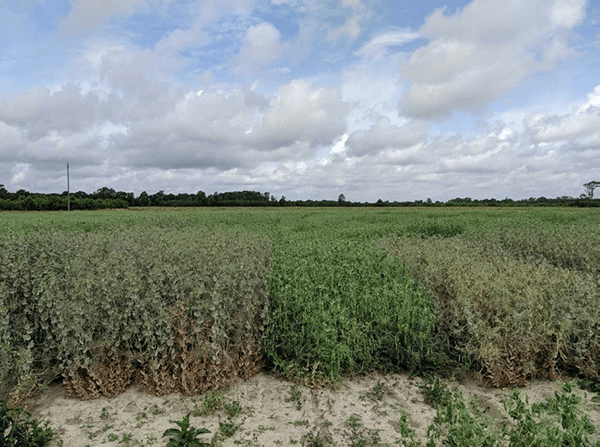 Disease is probably the largest pest management challenge for pea production in our region. Peas are susceptible to a range of soilborne and foliar diseases. Producers in our region have encountered a variety of seedling diseases, especially on poorly drained fields. Powdery mildew has been frequently encountered here (Figure 12), but this disease can be effectively managed through variety selection or foliar fungicide applications.

Herbicide options are limited for pea production in North Carolina; however, most growers apply a pre-emergent herbicide at planting. Applying post-emergent herbicide is unnecessary if peas are planted in narrow rows as agronomically recommended; peas planted in this manner can typically compete with weeds later in the season. An advantage of the pea planting window is that an herbicide burndown application prior to planting will often kill the first flush of winter weeds.

Several insects can impact pea production. Aphids were the pest most prevalently encountered by our growers, in numbers that exceeded the recommended thresholds for cost-effective insecticide applications in other U.S. regions (Figure 13). 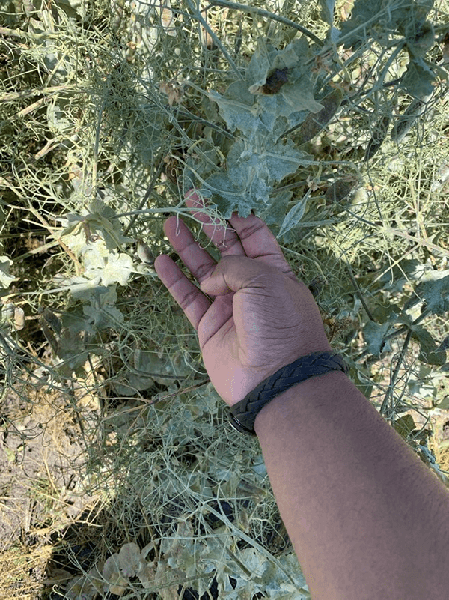 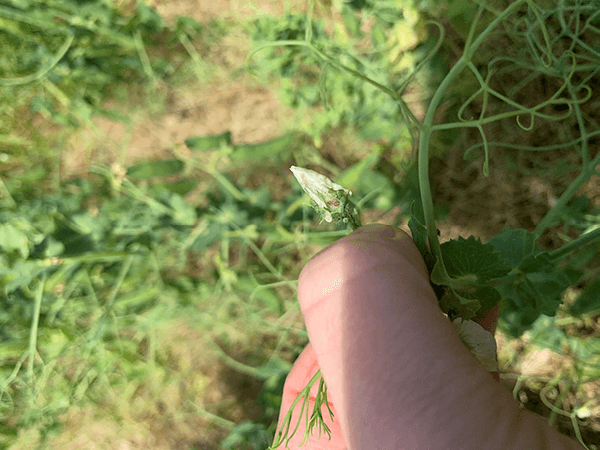 Peas can reach considerable height (Figure 14), which can lead to lodging. Lodging of the crop prior to harvest is a challenge in pea production (Figure 15). Lodging declined when planting was delayed (presumably due to more vegetative biomass at earlier planting dates), with lodging >15% with December and January planted peas and <5% with February and March planted peas. Lodging increased to >15% at seeding rates higher than 300,000 seeds/A. Growers in our region have added lifters to their combines to aid in harvesting lodged peas (Figure 16), but we hope that lodging can eventually be minimized through improved variety selection. 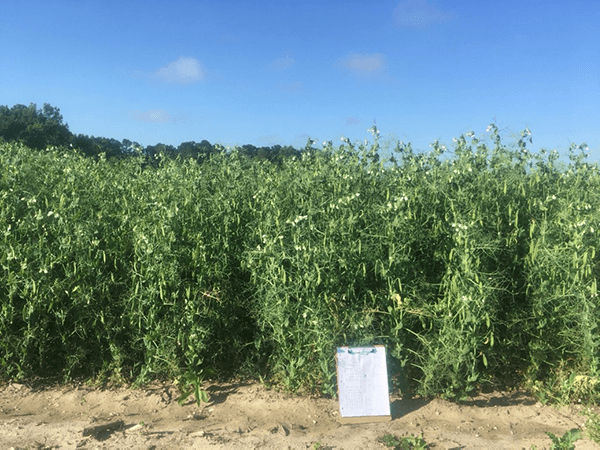 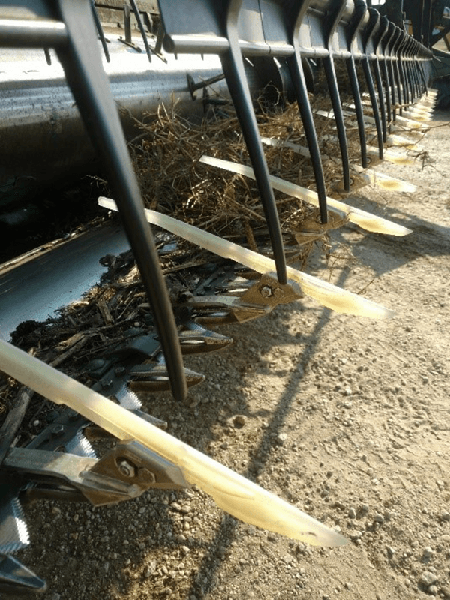 Figure 16. Lifters added to a combine header to aid in harvest of lodged peas.

Figure 16. Lifters added to a combine header to aid in harvest of lodged peas.

Protein is the quality constituent in grain peas that we were primarily interested in, with protein content between 15% and 35% reported in the literature. In our agronomic and variety trials, we measured protein content between 17% and 20%. There were differing levels of protein across varieties in two of the five variety trial locations (Tables 1, 2, 3, 4, and 5). In our agronomic trials, neither planting date nor seeding rate impacted pea protein levels.

Skip to Existing and Potential Markets

There are a few existing markets and potential new markets for grain pea in our region. Recently, growers have sold to a grain-free (no corn, soybeans, or wheat) dog food processing plant in South Carolina. Chicken producers in Georgia are currently buying the peas for feed.

Peas have also been produced in our region for specialty food export markets in Asia. Peas are one of the primary ingredients in plant-based protein products, another potential market if processing facilities existed on the East Coast. North Carolina animal producers have shown interest in the potential of grain peas as a component of feed rations. If growers wish to target the dog food and food-grade markets, they will have certain production restraints.

There are several aspects of pea production in our region in which we have major deficits in knowledge needed to robustly advise growers on successful production. We know little about fertility management of this crop here. Our regional growers currently use fertility recommendations that were developed for the Northwest, where soil types can be vastly different. Research is also needed to determine appropriate management strategies for pea pests in our region. We also don’t know whether peas intensify disease or nematode problems in the subsequent soybean crop, though growers on the limited planted acreage in our region have not observed any ill effects; this topic should be addressed in future research.

The research discussed in this publication was funded in part by Golden Leaf Foundation.