The granulate (Asian) ambrosia beetle, Xylosandrus crassiusculus, was first found near Charleston, SC, in 1974 in peach trees. It is a tiny beetle with a long name! Females are almost 1/8 inches long and are chestnut brown with darker wing covers. The rear of the wing covers is granulate and less shiny than the rest of the insect. Eggs are white, translucent, and tiny. Eggs are usually laid in a mass. Granulate ambrosia beetle grubs are chunky, C-shaped, and white (even their heads).This tiny beetle is a pest of woody ornamental, fruit, and nut trees throughout North Carolina and can cause significant damage in nursery, landscape, and orchard settings. Ornamental nursery stock seems particularly susceptible. 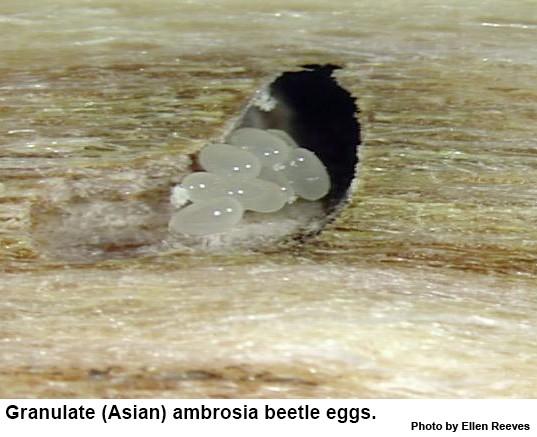 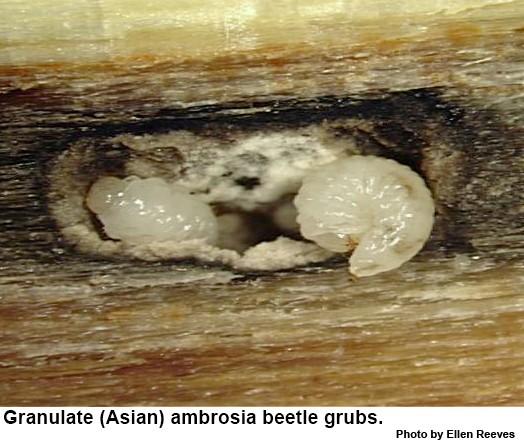 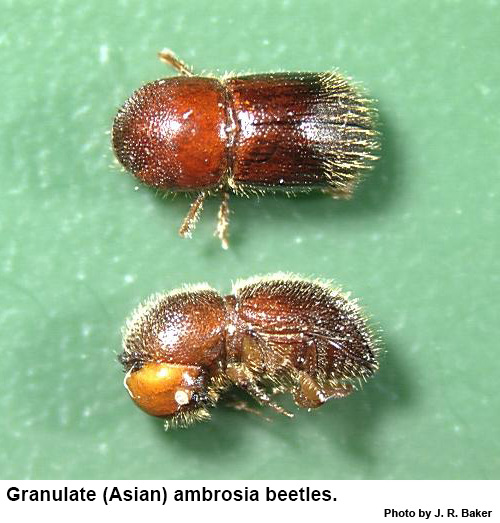 The granulate ambrosia beetle is reddish brown except for the dark wings.

The granulate ambrosia beetle is reddish brown except for the dark wings.

Granulate ambrosia beetles emerge in early spring and attack thin barked, deciduous trees. Female beetles bore into trunks of young trees. Visible symptoms include wilted foliage and strings of boring dust that may protrude from the bark as tiny sticks or tooth picks. These strands may reach 1.5 inches if wind and rain don't break them off. The beetles are present most of the year, but NCSU Plant Disease and Insect Clinic records indicate Granulate ambrosia beetles are most active in March to early April. However, they remain active at low levels through the Summer and into the Fall. Eggs, larvae and pupae are found together. There are no individual egg niches, larval tunnels or pupal chambers. High humidity is required for successful reproduction. Adults and larvae feed on a type of fungus known as "ambrosia" the beetles introduce as they tunnel into the sapwood and sometimes heartwood of trees and logs. The fungus grows on the walls of the tunnel. Infestations can be identified by toothpick-like strands protruding up to 1.5 inches from the host plant. The strands of boring dust are produced by the female beetle as she excavates her gallery. The strands are fragile and are easily broken off by wind or rain leaving only pencil-lead sized holes. Individual plants may contain from one to more than 50 individual beetles. (There are also some reports of Xylosandrus germanus also producing toothpick strands.) We probably have two generations a year in North Carolina. 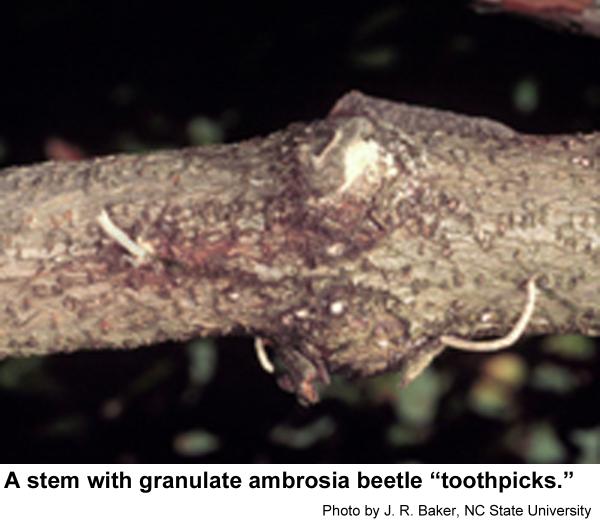 Granulate ambrosia beetles typically cause "toothpicks" to extrude from their tunnels.

Granulate ambrosia beetles typically cause "toothpicks" to extrude from their tunnels.

Granulate (Asian) ambrosia beetles have been reported damaging over 100 species of trees. However, species most commonly damaged in North Carolina nurseries are styrax, dogwood, redbud, maple, ornamental cherry, Japanese maple, and crape myrtle. Other reported hosts include pecan, peach, plum, persimmon, golden rain tree, sweet gum, Shumard oak, Chinese elm, magnolia, fig, azalea, and even grape vines and sweet potato. Female beetles bore into the trunks and branches (1 to 2.5 inches in diameter) of young trees and excavate galleries in the heartwood. In addition to boring damage, female beetles inoculate trees with ambrosia fungus that can block xylem vessels and interfere with vascular transport. Furthermore, they can introduce or create entry points for pathogenic fungi such as Fusarium spp. Infested plants often die from a combination of boring damage, ambrosia fungus, and infection by a secondary pathogen. 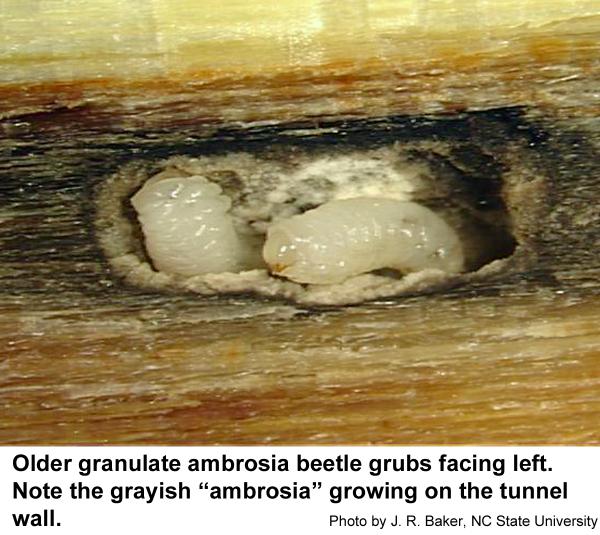 Granulate ambrosia beetles innoculate their tunnels with a fungus.

Granulate ambrosia beetles innoculate their tunnels with a fungus.

Preventative applications of pyrethroid insecticides can protect trees by preventing Granulate Ambrosia Beetles from excavating galleries. However, once beetles are inside trees they cannot be killed with insecticides and fungicides are ineffective against the ambrosia fungus. Thus, the timing of preventative insecticide applications is crucial to protect trees from damage by this pest. Apply sprays after beetles are first detected in monitoring traps (see Granulate [Asian] Ambrosia Beetle Trapping below). Heavily infested plants or plant parts should be removed and destroyed. It may be best for large growers to wait 3-4 weeks after trees are attacked before removal so as to concentrate and destroy the greatest number of beetles, possibly sparing some healthy trees.

Residential Recommendation: If the damage is heavy on the main stem, it may be better to start with a new plant, especially if the plant is small. To try to rescue and infested plant, dead wood should be pruned out and destroyed. Chemical treatments are not very effective once the beetles are inside the tree. Our best recommendation is to apply a formulation of permethrin in mid February to try to prevent damage by the first flight of beetles in March. The later flights are usually not nearly as damaging. Be sure to follow the directions for safe use found on the label of whaterver insecticide you use.

Commercial growers and landscapers: A landscape borer spray containing a pyrethroid such as permethrin or bifenthrin can be used and may have to be reapplied every two to three weeks while beetles are active. A surfactant or sticker may help the insecticide adhere to bark and provide longer protection. Read about a technique to reduce spray volume in nurseries in Other Resources below..

Previously recommended sprays of lindane and dursban have been shown to be largely ineffective and these chemicals are no longer available or registered for this use. In addition, systemic products such as imidacloprid are also ineffective because the beetles do not feed on vascular plant tissue.

Some growers find ethyl alchohol based traps helpful to monitor for adult beetles in the Spring. These can be homemade soda bottle traps (Baker trap), Lindgren funnel traps, or modified Japanese beetle traps. Soda bottle traps are least expensive, but are less durable. The ethanol release strip purchased for use with the funnel trap tends to provide the most consistent lure release. 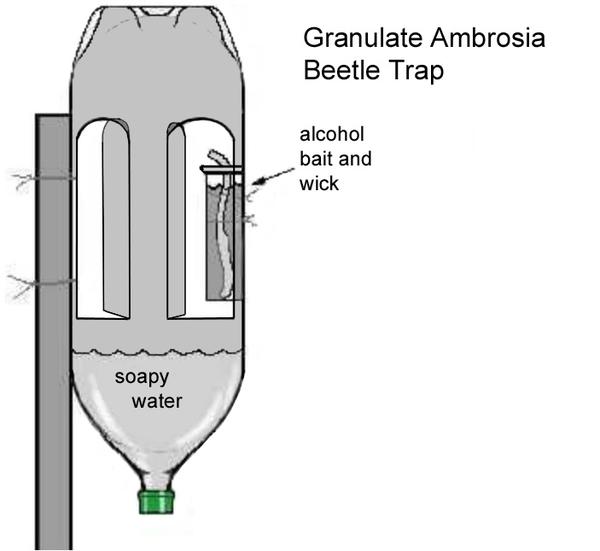 This ambrosia beetle trap is relatively easy to make and fairly effective.

This ambrosia beetle trap is relatively easy to make and fairly effective. 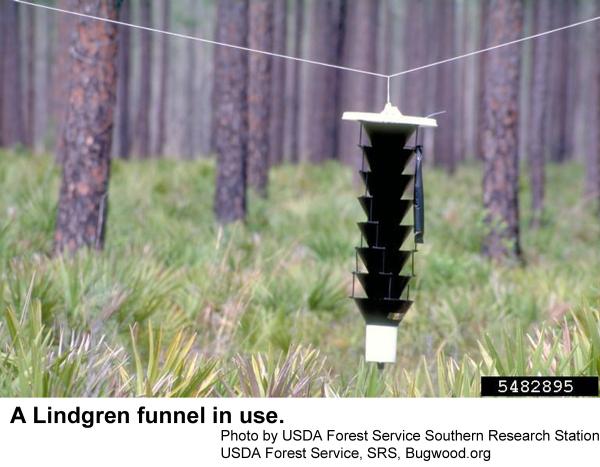 The Lindgren funnel trap is more sophisticated, but works well.

The Lindgren funnel trap is more sophisticated, but works well.