Female beetles bore into the sapwood of stems and young trees. Although attracted to damaged, stressed, or transplanted trees, this beetle will also attack seemingly healthy, thin-barked hardwoods or branches usually from 1 to 2 inches in diameter. Visible symptoms include wilted foliage and strands of boring dust protruding from small holes. Heavy infestations may result in tree death (which usually occurs during leafing-out stage).

In areas with a history of Asian ambrosia beetle damage, protective sprays have been the best means of protection. Scouting and trap monitoring are important. Use of ethyl alcohol traps can indicate when beetle flight begins in the early spring. Protective sprays may be applied soon after beetles appear in traps even though beetle captures in traps peak later in the season (Figure 1). Traps do not catch enough beetles to prevent plant damage and are only a monitoring device. An estimate is to use two traps for an acre and one additional trap per acre, but fewer traps could be used.

Commercial traps are available, but homemade traps in several designs offer a useful alternative. Below is a design from James Baker of NC State University (Figure 2). It uses a two liter inverted soft drink bottle mounted about three feet above the ground on a wooden tomato stake. Traps are typically placed around the outside of susceptible plant blocks in a nursery. Be sure to use only ethyl alcohol (ethanol) in the trap. They should be in place by February in some areas and should be checked every two or three days. Lacking a specific lure for this beetle, these ethanol traps may also collect other species of beetles. 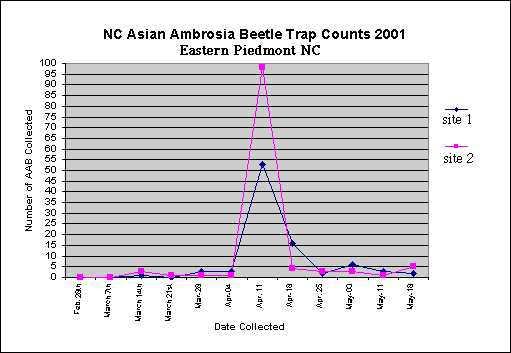 The granulate ambrosia beetle is attracted to ethyl alcohol traps along with other bark beetles. Nurserymen need to be able to distinguish the granulate ambrosia beetle from these other beetles to help make treatment decisions. At least 15X magnification will be needed to see these features. The following diagrams are useful in making this determination. They are not intended as a key for identifying other species of bark beetle, but may help you determine if the beetle in question is in the genus Xyleborus or Xyleborinus (fairly common bark beetles).

Bark beetles are found in the family Scolytidae. The granulate ambrosia beetle is in the tribe Xyleborini and genus Xylosandrus.

1. Tibia on middle and hind leg broadly widened, evenly curved outside edge, with many teeth (Figure 3): Xyleborini (go to 2)

OR
Tibia on second and third leg straight or slightly widened, and with few or no teeth (Figure 4): not granulate ambrosia beetle

Figure 4. Middle and hind leg with no teeth.

Figure 4. Middle and hind leg with no teeth.