Adult green June beetles, Cotinus nitida, are metallic green and nearly 1 inch long. The body margins are bronze to yellow and wing covers are sometimes reddish brown. Pupae are brown and 1/2 inch long, and larvae ("grubs") are cream-colored and can be from 1/4 inch to 2 inches long. Larvae often crawl across the ground on their backs while extending their legs upward. Eggs are round, about 1/16 inch in diameter, and are laid in walnut-sized clusters of 10 to 30. Third-instar green June beetle larvae produce a secretion that binds soil particles together and enables them to form a protective case in which they overwinter in the soil. By May, larvae begin to pupate, and adults develop within 2 to 3 weeks. They emerge to mate in July and August, becoming most abundant around the time that early-maturing apples are harvested. Mated females lay eggs in debris, showing a preference for moist organic soil. Eggs hatch in 10 to 15 days. Larvae feed on rotting organic material until reaching the third, overwintering instar. There is one generation per year. There is one generation per year in North Carolina. Green June beetles are native insects occuring from Florida to the midwest and as far north as Connecticut. They are commonly seen flying near the ground in landscapes from mid to late summer, occasionally becoming pests of fruit, especially figs. Green June beetle grubs are large and are edible. Homeowners sometimes find hundreds or thousands of these large, white grubs on the sidewalks and driveways around the house. 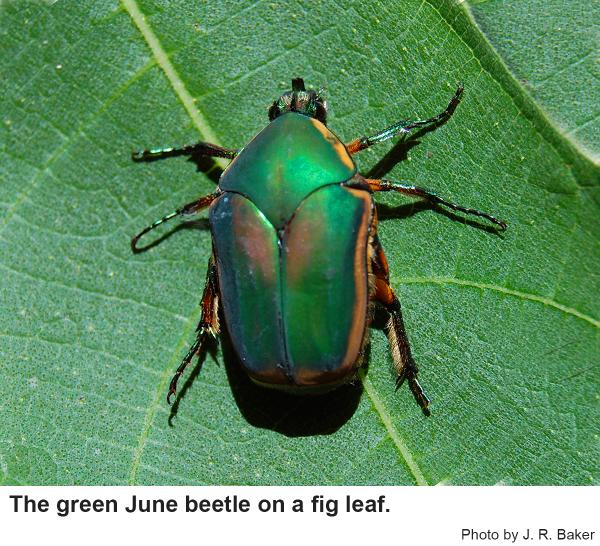 Green June beetles are attractive and harmless to humans.

Green June beetles are attractive and harmless to humans. 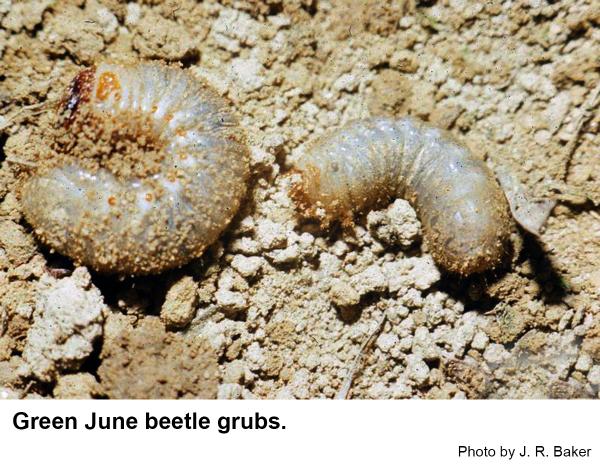 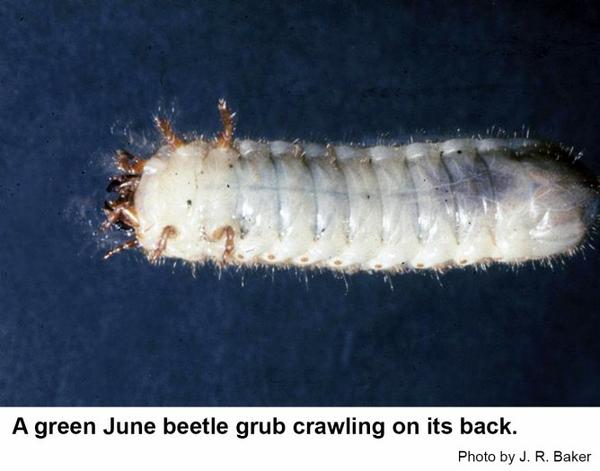 Green June beetle grubs crawl about on their backs at night.

Green June beetle grubs crawl about on their backs at night. 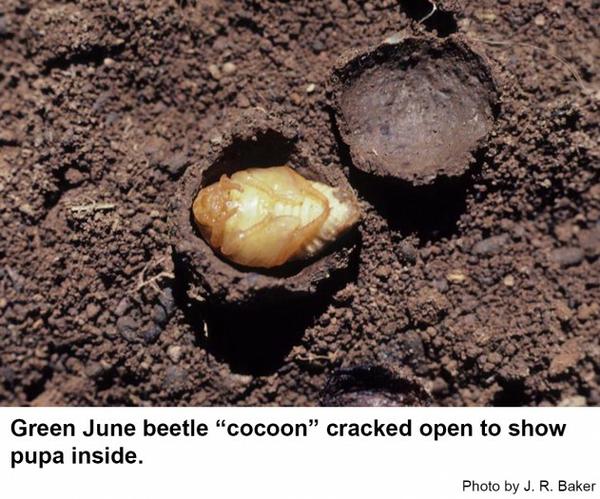 Green June beetles feed as chafers on the foliage and fruit of trees in mid summer. Damage appears similar to that of Japanese beetles. Adults chew irregular holes in fruit, sometimes to the point fruit is almost entirely consumed. Foliage is skeletonized until there is no leaf tissue remaining between the veins. In some regions the adults are called "fig-eaters." In turf, the grubs sometimes keep a tunnel open to the soil surface and push up small mounds, or turrets of loose soil that resemble earthworm castings. Tunneling by the grubs and burrowing by the adults into the soil each night can cause even more damage by uprooting young grass seedlings. It is reported that Green June beetle grubs feed on decaying organic matter in the thatch and root zone of many grasses, as well as on the underground portions of other plants such as sweet potatoes and carrots. The author kept a green June beetle grub that ate 12 Japanese beetle grubs and one and a half black cutworms within a week before it pupated, so the grubs may have some beneficial impact as well. 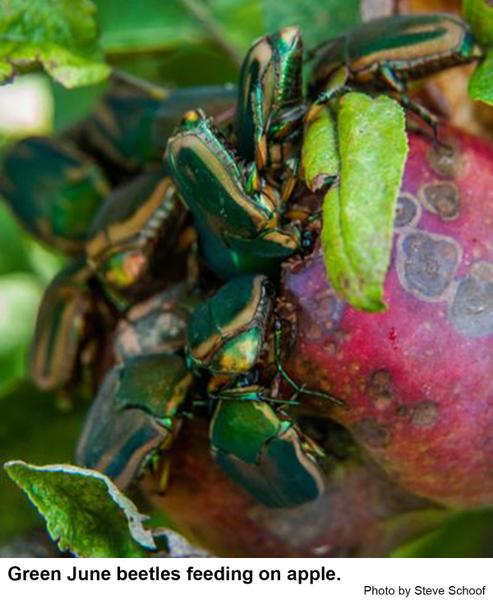 If there is no indication of turf damage due to tunneling by the grubs, no action is really necessary. Green June beetles are most common in older lawns and pastures with high organic content soils or manure fertilizers. Green June beetle grubs are unusual also in that they are susceptible to Sevin insecticide applied as a dust or spray to the surface of the soil or infested turf (other white grubs are not). The Sevin shouldn't be watered in. Sevin does not get down into the soil to kill the grubs, rather the grubs come up to the surface and come in contact with the Sevin residue. Late summer is a good time to treat while grubs are small and still close to the surface of the soil. The only complaint about using Sevin for green June beetle control is that with large numbers of grubs, the dead grubs produce a bad odor as they decay. Sevin can also be used to protect the foliage of plants attcked by adults. Adult green June beetles are strong fliers and often appear suddenly; therefore, protecting fruit and foliage requires killing beetles in the adult stage.