The green June bug (Cotinus nitida) is an occasional pest of grapes in North Carolina. Adult beetles are almost an inch long and metallic green in color. In North Carolina, the adults emerge in late June through August to feed and search for mates. In addition to grapes, adult beetles feed on other soft, overripe fruit such as blackberries, peaches, and figs. The females lay eggs in moist organic soil. Larvae live in the soil and feed on decaying organic matter and sometimes other soil insects. The larvae overwinter underground protected by a casing of soil and pupate in May. In North Carolina, green June beetles have one generation per year. 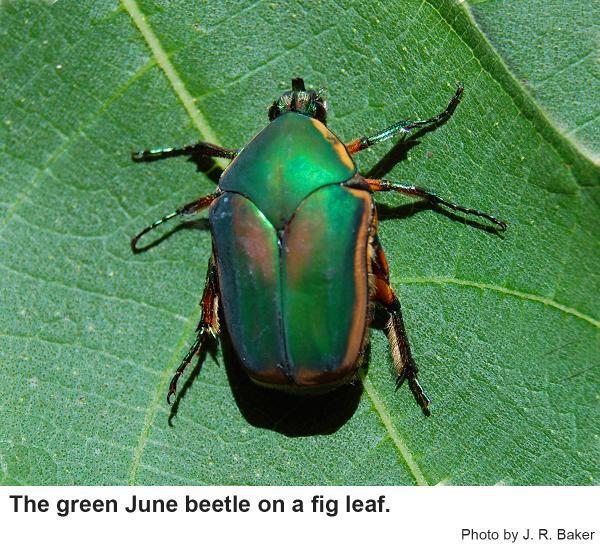 Adult beetles are green with hints of bronze. Adults can sometime be seen flying in low circles over open areas.

Adult beetles are green with hints of bronze. Adults can sometime be seen flying in low circles over open areas. 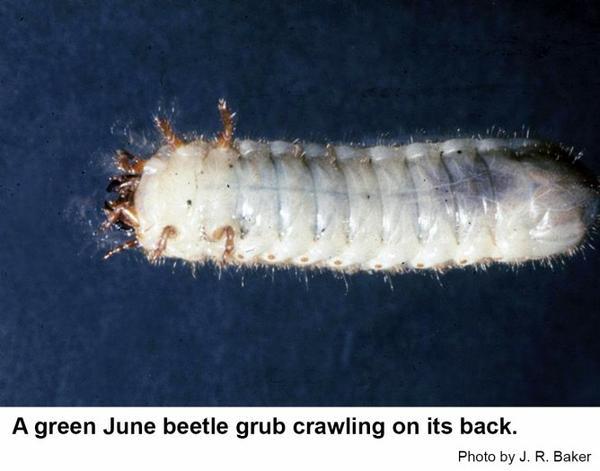 Larvae (‘grubs’) can grow to be 2 inches long. They sometimes are observed crawling on their backs with their legs in the air.

Larvae (‘grubs’) can grow to be 2 inches long. They sometimes are observed crawling on their backs with their legs in the air.

Green June bugs feed on grape fruit. The beetles are most attracted to fruit that is overripe and will preferentially feed on it over less ripe fruit. Populations of green June beetles fluctuate from season to season, and damage one year does not guarantee damage the next.

Cultural methods are the recommended method of controlling green June bugs. Harvesting fruit before it becomes overripe will dramatically reduce green June bug abundance and damage. For varieties that ripen around the time of peak green June bug emergence, multiple harvests may be necessary.

We do not recommend insecticide applications to control green June bugs in most instances. In situations where harvest is difficult to time, such as periods of frequent rain, limited insecticide applications may be helpful to protect harvestable fruit but materials effective against green June beetle also have the potential to cause non target pest outbreaks of secondary pests including two-spotted spider mites.

Organically-acceptable insecticides will generally have limited efficacy against the green June bug, and cultural controls will be more effective.

Green June Beetles in the Landscape