The Jerusalem artichoke (Helianthus tuberosus L.), also known as sunchoke or sunroot, is an herbaceous perennial in the sunflower family. Jerusalem artichokes are produced throughout the United States primarily for their edible swollen tubers (swollen underground stems) (Figure 1). These tubers look like a cross between white potatoes and ginger root. However, they are not well adapted to the hot climates found in the southeast. While most areas of North Carolina are suitable for growing Jerusalem artichoke, yields may be diminished compared to cooler growing regions. Much of the commercial production of Jerusalem artichokes occurs in the northeastern and northcentral United States. In the warmer climates of the southern United States, the occurrence of soilbourne diseases largely prevent commercial production.

Freshly harvested Jerusalem artichokes are comparable to water chestnuts and can be used in salads. Tubers can be cooked like potatoes. Jerusalem artichokes can also be used for pickling, animal feed, fructose production, and alcohol production. Unlike most root vegetables, the principal carbohydrate in Jerusalem artichokes at harvest is inulin rather than starch. After consumption, the inulin is converted in the digestive tract to fructose, which can be more easily tolerated by diabetics than glucose. There are other health advantages attributed to inulin that is in Jerusalem artichokes. For example, it lowers blood cholesterol level; reduces blood sugar level, low density lipoproteins, and triglycerides; and can benefit heart health.

Jerusalem artichokes should not be confused with the Globe artichoke (Cynara scolymus), which is not adapted to North Carolina conditions. In globe artichokes, the edible portion is the globular flower. 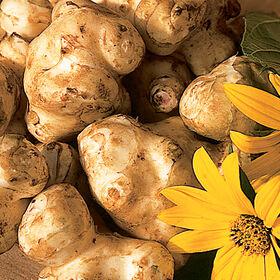 Jerusalem artichokes are available commercially under several trade names. Many of the existing variety stocks are believed to be duplications or variant forms of the same strain, with slight differences appearing due to soil or culture. Several varieties or selections are listed and available from seed companies.

Interested growers should plant local stock which is known to be adapted to the area and produce acceptable yields. Since limited information is available about how well the varieties grow under North Carolina growing conditions, only small plantings should be considered to determine the most adapted variety before making large plantings. If local plant stock cannot be found, the following table lists some possible seed sources.

*Some varieties may appear under the commercial name Sunchoke or Sunroot.

Generally, it is suggested that 500 to 700 lb per acre of 6-12-6 (30 lb N, 60 lb P2O5, 30 lb K2O) be broadcast in the row. This rate may be increased on soils low in natural fertility. Fertility programs similar to that of potatoes should be considered as a starting point for growing Jerusalem artichokes.

Planting should be early in the spring (February – April) when the soil can be satisfactorily worked. Later planting results in reduced yields. Like white potatoes, whole tubers or pieces of tubers that are no less than two ounces and have two or three prominent buds should be planted. Pieces around 2 oz in size should be used. Smaller pieces are more likely to dehydrate and may result in lower yields. Do not allow cut seed pieces to dry before planting. Plant 2 to 4 inches deep, in rows 30 to 42 inches wide with 15 to 24 inches between plants. To prevent the artichokes from spreading and becoming a potential weed problem, plant the artichoke tubers in contained beds.

Cultivate shallowly and only as needed to control grass and weeds as the planting is being established. During plant establishment, grass and weed problems will be reduced by shading since plants grow over 6 feet high. Tubers begin to form in August and may become 4 inches long and 2 to 3 inches in diameter.

The crop should not be harvested until after frost (October – December). Tubers dug later in the season are sweeter but have less inulin. Tops should be cut with a mower. Plow open the furrow, pick up the tubers, place in field containers, and remove from the field. Hand rakes can be used to great advantage in locating the tubers. Conventional potato harvesters, with modifications to account for the smaller size of Jerusalem artichokes, can be used to mechanically harvest the tubers.

Skip to Handling and Storage

The skin of Jerusalem artichokes is very thin. Care should be taken in handling to avoid skinning, cuts and bruises. The skin is also susceptible to rapid moisture loss so the crop should be put in storage immediately after harvest. Cold storage facilities should have high humidity (85 to 95% relative humidity) and a temperature of 32°F. Under these conditions, tubers can be kept for several months. It is important to maintain a high relative humidity to reduce tubers from shriveling due to water loss and to also reduce decay. If the tubers are to be washed, fresh water sanitized with bleach should be used.

There is considerable variation in yields but generally North Carolina growers may expect from 5 to 7 tons per acre.

Very little information is known about diseases and insects on Jerusalem artichoke. However, pests like slugs and swift moths may become problematic as they can eat holes in the tubers. Controlling moisture and weeding frequently can help prevent pest damage. Sclerotina rot, which appears as a white fluffy fungus producing black spores in stored roots, can be avoided by discarding diseased or damaged roots when observed in the field. Very few pesticides are labeled on this crop.

Jerusalem artichokes are a very hardy perennial and can become a potential weed problem (Figure 2). Since it is difficult to harvest all the tubers in a field or garden, there will be volunteer plants the following spring. It is important to remove these before they can set tubers in August. 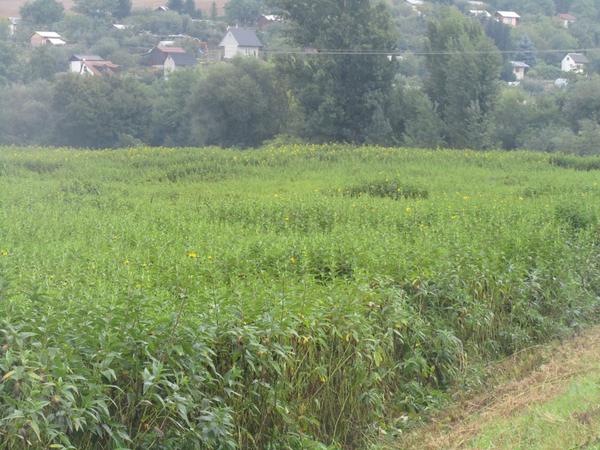