Depending on the host plant, the adult hemispherical scale, Saissetia coffeae, may vary in size. The scale varies from 1⁄8 inch on Cycads to as small as 1⁄16 inch on asparagus fern. Relatively hemispherical, brown, smooth, and shiny, the scales may resemble a miniature army helmet. Young females may have a pattern of ridges in the form of the letter "H" on the dorsal surface.

The oblong, pinkish-beige eggs are very small and are protected by the mother's body in a mass of hundreds. The flat, pinkish beige crawler is about 1⁄32 inch long with two red eye spots. The antennae and legs are short and spindly. There are two setae protruding from the rear. Nymphs are semitransparent, light yellow or pink, and flat (young) to humped (older). They are so closely attached to the host plant that the legs and antennae are concealed. Two pale lines start at the margin on each side and fade in intensity toward the middle. Nymphs and young adults may exhibit the characteristic "H" pattern of the black scale group. 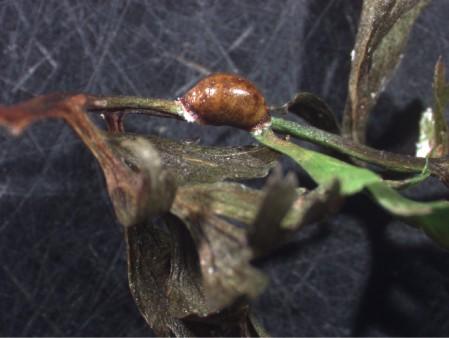 From its probable origin in South America, the hemispherical scale insect is now found in greenhouses and interiorscapes throughout the United States. The hemispherical scale insect has a wide range of hosts including bamboo, camellia, chrysanthemum, crape myrtle, croton, ferns, figs, gardenia, honeysuckle, lily, orchids, and zamia. The secretion of honeydew and subsequent formation of sooty mold detracts from the beauty and commercial value of the plant. Feeding stunts the plant and causes it to lose its leaves.

The hemispherical scale insect is a tropical insect that has become a common greenhouse pest. In warmer temperate areas, the scale can live outside. Unlike many other scales, the hemispherical scale secretes little wax. However, the scales do produce much honeydew that allows sooty mold to grow. Males are unknown and reproduction is by parthenogenesis. Each female may deposit up to 1,000 eggs. After laying the eggs, the female dies and her body shrinks to form a cup or helmet over the eggs. Development for the egg stage and the three nymphal instars requires at least 40 days and may take as long as 105 days. There may be several generations each year in the greenhouse, with all stages being present at any one time. The nymphs do not move much once they have begun to feed. The hemispherical scale insect has a low rate of parasitism indoors, and it often becomes a serious pest. 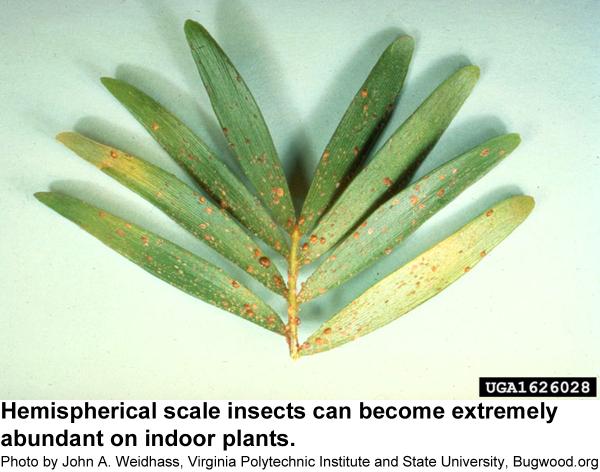 Like other scale insects, hemispherical scale can be difficult to control because the body of the mother protects the eggs and young nymphs. This is especially true if trying to manage them with contact insecticides such as pyrethroids. Systemic insecticides will provide more reliable control because they make the plant toxic to feed on rather than having to contact the insect directly. The following pesticide formulations should control hemispherical soft scales if applied to infested plants thoroughly. A second application may be necessary later in the season. Systemics such as dinotefuran and imidacloprid can be applied as a foliar spray or drench. Others such as acetamiprid can only be used as a foliar spray. Thus, efficacy relies on reading the label and using each product properly. Never set an ornamental plant out in the sun to treat it; pesticide injury may result. Keep treated plants in the shade or treat during the cooler parts of the day so the foliage will dry before the plant is exposed to direct sunlight.