Across environments and production systems, several factors can interact and ultimately determine the fate of diversity (# of species and abundance) in grasslands. They include: environmental factors such as light, temperature, and rainfall; growth habit of each species in the mixture (a function of occupying different niches in time and/or space); nodulation ability and capacity for nitrogen fixation from legumes; edaphic factors (pH, nutrient availability and form); frequency and intensity of defoliation by grazing animals; ability to survive drought periods; seed production capacity; and pest and disease tolerance. Therefore, research projects that can address the above-mentioned factors on a local basis are relevant.

Designing “the perfect” mixture for all situations is arguably a path to follow and most likely a never-ending task. Rather, a mechanistic approach that encompasses defined production and conservation objectives (e.g. reduce weed infestation, prevent soil erosion, increase soil organic matter, remediation of areas impacted by high nutrient concentrations, grazing vs. hay production, high vs. low fertilization) may help define specific mixtures and management practices that result in persistent and resilient grasslands. The purpose of this article is to present and discuss some of the results of experiments that have addressed the use of forage mixtures, relevant to our region, and highlight the results under defined management conditions.

Lack of maintenance fertilization and inadequate grazing management are critical factors resulting in degradation of grasslands. Degraded grasslands have limited potential to serve their primary function as a source of forage for livestock or to provide ecosystem services.
Due to their capacity to fix atmospheric Nitrogen (N2) and their relatively high nutritive value compared to warm- and cool-season grasses, legume plants certainly come to the top of the list when looking for forage species to design a mixture. Nevertheless, grazing management can have profound impact on how the mixture develops and persists over time. In other words, it is the art and science of grazing management that determines whether a potentially good forage, or mixture of forages, will actually be a good one.

Grazing management is characterized by: 1) grazing intensity [measured as stocking rate (animal-based units) or pasture height (plant-based units)], 2) grazing frequency (i.e. time between consecutive defoliation events, stocking method) and, 3) timing (i.e. season of the year, physiological stage of the plant). The three factors and their interactions, determine the fate of planted pastures (i.e. number of species present and abundance of each species in a pasture). The text that follows will cite a few examples of how grazing management and plant responses interact and ultimately affect diversity in pastures. 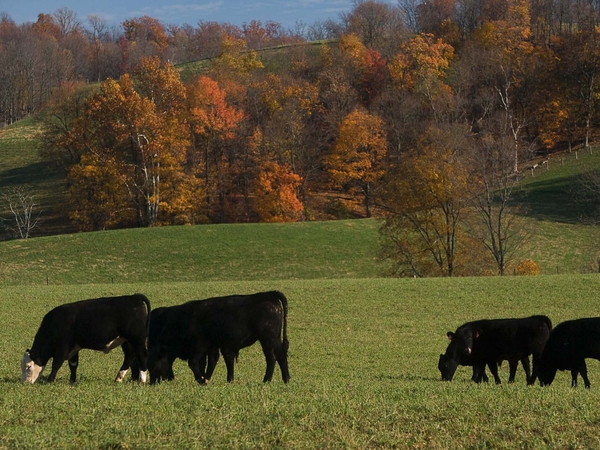 Skip to Grazing Intensity Effects on Persistence and Botanical Composition

In grass-legume pastures, legumes often are considered to be less persistent under high stocking rates than grasses; nevertheless, the species present in the sward has a major effect on the response (Sollenberger et al. 2012). Under rotational stocking management, Carlassare and Karten (2002) evaluated for 2 years grazing intensity effects by initiation/termination at heights of 8/2 inches (higher intensity) or 11/3 inches (lower intensity) in a complex (in this case defined as more than 4 species present) mixed pasture primarily dominated by orchardgrass and kentucky bluegrass. Orchardgrass height defined the grazing intensity regimes. Orchardgrass is a tall-growing, cool-season bunchgrass. Kentucky bluegrass is a rhizomatous, short-growing, cool-season grass.

The results of the experiment indicated that after two years of grazing there was significantly more legume (alfalfa and red clover) and orchardgrass herbage harvested in tall than short pastures. In the short pasture the dominant species where Kentucky bluegrass and white clover. Alfalfa and red clover are less tolerant to close and frequent grazing than white clover because they have more growing points and leaves in the upper canopy, resulting in the loss of a higher proportion of their growing points and leaf area at grazing (Barnes et al., 1995). Therefore, higher grazing heights and longer regrowth periods improve alfalfa and red clover performance compared with shorter and more frequent grazing. Similarly, Conway (1968) reported greater percentage of white clover at higher stocking rate.

Consequently, grazing intensity can be utilized to shift the composition of forage species in a pasture.

Forage stand evaluation after two years of imposing treatments resulted in greater legume presence under rotational stocking compared to continuous stocking (Table 1). The reduction in legume presence in the pasture after two years of grazing continuously was greater for alfalfa (31 percent points reduction) and birdsfoot trefoil (12 percent points reduction) compared to white clover (6 percent points reduction) (Table 1). Why…? Two factors are primarily responsible for the results. First, animal preference for legumes results in greater selection towards the legume component in the grass-legume mixture. Because the time to rotate the livestock out of the pasture was based on the overall canopy height, as opposed to the height of the legume component, this resulted in legumes being grazed more intensively compared to the grasses to the point that it became detrimental and resulted in a loss of legumes from the system. In the continuous stocking system the livestock remain in the paddock permanently and therefore the effect of animal selection can be more pronounced. Indeed, the overall reduction in the legume component was greater for alfalfa and birdsfoot trefoil than it was for white clover. Why…? The second factor is related to plant morphology. Alfalfa and birdsfoot trefoil have an upright growth habit with many leaves and stems arising from the crown at the base of the stems. In contrast, white clover has stolons (stems that grow close to soil level and serve as energy reservoirs) from where new roots and eventually new plants grow (Figure 1). The presence of stolons provides white clover with a greater potential to spread, and this case particularly, provides white clover with a greater ability to persist under continuous grazing compared to alfalfa and birdsfoot treefoil.

Table 1. Herbage production and botanical composition as a function of stocking method at the end of two years of grazing. Adapted from Bryant et al. 1961.

Because of greater loss of alfalfa in the continuous stocking treatment the researchers decided to come back to the pasture and estimate weed infestation. They reported 30% weed infestation in the continuous stocking treatment compare to only 9% for rotational stocking in the alfalfa + orchardgrass mixture (Mixture 1). The results illustrate the importance of understanding the basic concepts of plant morphology to put in place a management system, stocking method in this case, to ensure persistence of the desirable plant species and prevent weed infestation. 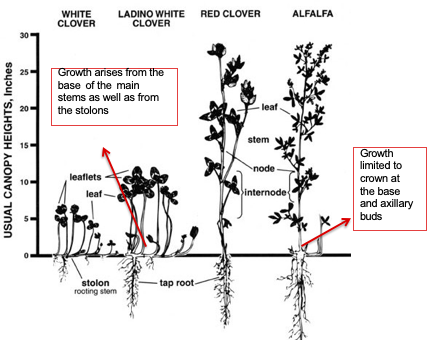 Skip to Summary and Conclusions

Several experiments were presented involving grazing intensity and stocking method with the objective of exemplifying the importance of understanding the effects of grazing management decisions and choice of forage species on diversity in grasslands. Diversity in grasslands, defined here as number and amount of each species growing intermingled, has received renewed interest and has specially been linked to soil health objectives. Plant to plant competition for resources is indeed one of the first factors that can determine the fate of diversity in systems where there is no intervention of animals. In grazing systems, however, the animal-plant interface can have a determinant role very early in the life of a diverse pasture and ultimately determine the potential of a given forage or mixture of forages to meet expected goals. Grazing management decisions and choice of forage species should be designed with specific objectives in mind. Objectives should include a combination of production- and conservation-oriented themes, and therefore it is important to understand how the plant and animal components of a grazing system interact.