Japanese beetles, Popillia japonica, was first reported in North America in 1916 and now occurs in most of the eastern United States. Japanese beetles are about 1⁄2 inch long with dark heads and shiny, metallic green with brown wing covers. They have small tufts of white hairs at the tip of the abdomen and along each side. Eggs are translucent white to cream and elliptical and about 1⁄16 inch in diameter. The larvae, called grubs, are white and 'C' shaped with yellow-brown heads. Grubs are about 1 inch long when mature. Scarab grubs are identified by the shape of their anal slit and arrangement of hairs around the slit called a raster pattern. On Japanese beetle grubs this is two rows of hairs which form a 'V.' The pupa is approximately 1⁄2 inch long and 1⁄4 inch wide and light brown to metallic green.

The beetles can feed on the foliage, flowers, and fruit of over 275 different plant species. Some of their favorite ornamental landscape plants are roses, crape myrtle, linden, hibiscus, crab apple, and elm. They cause damage called 'skeletonization' to leaves by feeding on the upper leaf surface and eating tissue between leaf veins. This gives leaves a lacy appearance. Beetles generally consume entire petals of roses and other flowers or leave ragged holes in the petals. In most cases the damage is purely aesthetic. Japanese beetle feeding is and unlikely to reduce the health or longevity of established trees and shrubs. 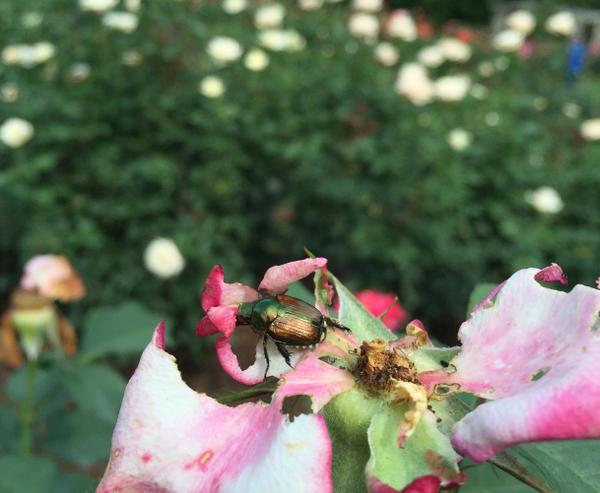 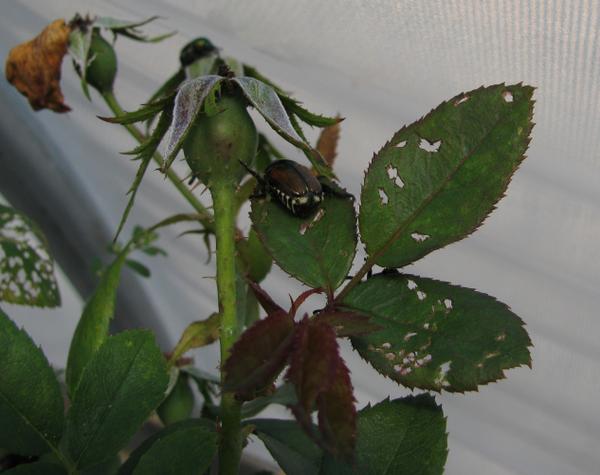 Japanese beetles are attracted to pale flowers and to each other.

Japanese beetles are attracted to pale flowers and to each other.

Adult Japanese beetles typically emerge at around 1,000 growing degree days. This typically early June in central North Carolina. Peak adult activity occurs mid-late June in most areas and lasts a few weeks. Japanese beetles aggregate in response to odor released by damaged plants and a pheromone released by female beetles. This aggregation and mass feeding can result in severe defoliation of plants.

Soon after emerging, female beetles burrow 2 to 3 inches into damp soil and deposit 40 to 60 eggs in small batches. In dry weather, eggs may desiccate before hatching. If the ground is too hard or dry to borrow in larvae may die. Therefore, adults are attracted to low lying and irrigated areas to lay eggs where soil moisture is higher. In warm, wet summers, eggs hatch in about two weeks. The larvae feed on plant roots until cold weather forces them into hibernation. One generation occurs each year.

The beetle grubs are occasional pests of the roots of grasses and shrubs. Japanese beetle grubs occur in lawns, golf courses, pastures and even wooded areas. They burrow through the soil feeding on roots. Areas of dead grass may appear when large numbers of grubs are present especially during dry spells in September or early October. The grubs overwinter in cells about 6 inches deep. In spring, they move almost to ground level, where they complete feeding and then pupate. Japanese beetle grubs rarely do enough damage in a home lawn to warrant treatment. The threshold is approximately 12+ grubs per square foot.

In turf, 10 to 12 Japanese beetle grubs per square foot indicates it is time to apply and insecticides.

In turf, 10 to 12 Japanese beetle grubs per square foot indicates it is time to apply and insecticides.

Adult Japanese beetle emergence can be estimated with growing degree days and can be monitored with commercial bag-type Japanese beetle traps. You can also monitor highly attractive plant species such as roses for the appearance of beetles. The traps are much more effective in attracting Japanese beetles than in trapping them. Thus, traps should be placed away from susceptible plants. Traps are strictly a monitoring tool and will not reduce Japanese abundance or damage to plants. Since beetles can detect the trap lures from far away and are good fliers, traps can attract more beetles to a landscape and increase damage.

Commercial nursery and landscape operators will have less tolerance for damage to keep plants salable and presentable in the landscape.

For homeowners, there are several ways to reduce damage to landscape plants without insecticide applications. Since beetles are more attracted to each other than particular plants, homeowners can shake plants to dislodge beetles each morning. Without beetles already on a plant, it is less likely that beetles will aggregate there later in the day. Removing the buds from plants like roses can also reduce damage to plants. In some settings, flowers or plants can be protected with cheesecloth or other fine mesh.

If you choose to use insecticides, there are a number of products available for home use. Homeowner products change frequently so discuss the options with your local extension agent, Master Gardener, or garden center staff. Products containing imidacloprid, pyrethrins, or other compounds can reduce defoliation. Remember that insecticides kill insects. Thus, ANY insecticide will have some negative effects non-target or beneficial insects.

Japanese beetle traps are not control devices. The trapped beetles must be emptied from the traps every one to two days to prevent them from rotting and releasing ammonia which is repellant to other Japanese beetles. The traps are much more effective in attracting Japanese beetles than in trapping them and can increase the beetle abundance and damage in the trap's vicinity. Controlling grubs int he soil is not a feasible way to reduce adult feeding damage in your yard or landscape. Beetles will fly long distances to aggregate and feed on susceptible plants. Visit the factsheet for managing grubs in turf for more information.

Managing Japanese beetles in commercial landscapes or nurseries may require insecticides to keep damage within tolerable limits. Professionals have often relied on repeated foliar applications of carbaryl (Sevin) or pyrethroids such as bifenthrin (e.g. Talstar, Onyx), lambda cyhalothrin (Scimitar, Demand), deltamethrin (e.g. DeltaGuard) or permethrin (e.g. Astro). However, these products provide short residual control (carbaryl 1- 2 weeks; pyrethroids 2-3 weeks) and requires repeated applications and thorough coverage of leaf material to maintain effectiveness. These also kill most non-target and beneficial insects on the treated plants which can cause secondary mite or scale outbreaks. Systemic neonicotinoid products, such as imidacloprid, are effective and protect trees longer but cannot be used on Tilia spp. Drench applications should be made a couple weeks in advance of beetle arrival so plants have time to take up the insecticide through their roots and distribute it to leaf material. Drench applications also provide longer protection than foliar applications because plants are continuously taking up insecticide present in the soil or container. Research has demonstrated that an imidacloprid drench on lindens can reduce Japanese Beetle feeding for two years. Foliar applications can be used to provide instant knock down and systemic protection in situations where foliar applications are easier or more cost effective.

A complete, updated list of insecticides for Japanese beetle management is available in the Insect Control section of the North Carolina Agricultural Chemicals Manual. There are label restrictions against using neonicotinoids and most insecticides on flowering plants and when pollinators are present. Read the label for detailed restrictions.

Sevin and other pesticides are labeled for Japanese beetles and will do a good job of controlling them as long as the residue remains on the plant. A problem with Sevin is that honey bees gather the residue like pollen and carry it back to the hive to feed their larvae. DO NOT try to control Japanese beetles on flowers for that reason. Also, flowers open so rapidly that a bud sprayed in the morning might be open by afternoon and the beetles could still attack the petals because the pesticide residue is on the sepals below.
People should use Japanese beetle traps for several reasons: 1) it stimulates the economy when they buy them, 2) it gives them something to do besides watch television, 3) when used properly, the traps can suppress Japanese beetle populations up to 30% if a large enough area is trapped (perhaps a whole neighborhood). This is not enough suppression for most landscapers. On the other hand, Dr. Dan Potter at the University of Kentucky, has shown that in a specific yard, it is worse to have a trap than not. The problem is that the traps are so much better at attracting the beetles than they are in catching them so you wind up with more beetles in the vicinity of the trap than in the trap. This is especially true if the bags are not emptied regularly. Once the beetles begin to rot in the bag, the emitted ammonia repels the beetles from the immediate vicinity of the trap. However, the bait keeps on "calling" the beetles for a much greater distance than the ammonia repels them. The net result is far greater plant damage than would have been the case in the absence of the trap. To properly use a Japanese beetle trap, give the trap to your next door neighbor! At least the traps should be placed well away from plants that are to be protected.