Magnolia scale, Neolecanium cornuparvum, is one of our largest scale insects and is sometimes quite damaging to tulip tree and magnolia. This scale has one generation per year. Its biology is unusual in that the scales reproduce in late summer and the tiny new scales overwinter on the twigs and stems (most of the soft scale insect pests of ornamentals reproduce in May or early June). Male magnolia scales appear in early summer and mate with the females. The females swell considerably with eggs during the summer but the eggs hatch as they are laid so that it appears the crawlers are born rather than hatched. 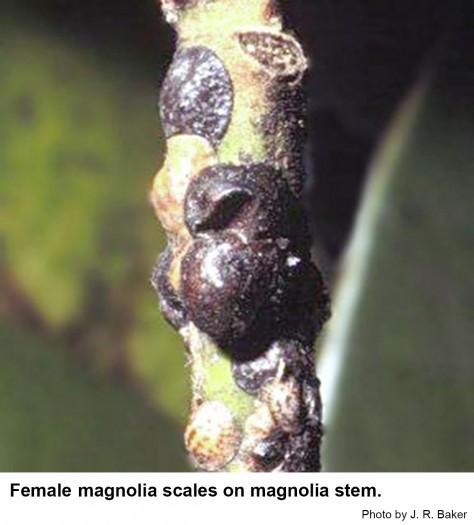 Magnolia scales are among our largest scale insects.

Magnolia scales are among our largest scale insects. 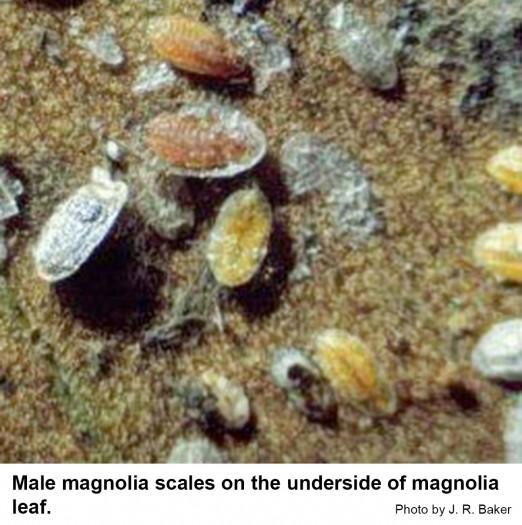 Male magnolia scales are found on the lower leaf surface.

Male magnolia scales are found on the lower leaf surface.

Infested magnolias and tulip trees may become sticky with honeydew excreted by the scales and black with sooty mold fungi that grow in the honeydew. The overall tree may have sparse foliage and dead branches or the trunks may be distorted because the scales sometimes kill out the leader branches over the years. In addition, most homeowners object to the honeydew and the wasps, flies and bees that are attracted to the honeydew.

If the tree is small enough to be sprayed, fall would be a good time to treat for this pest as the tiny nymphs are exposed on the stems. Spray with Orthene, Safari, Sevin or a pyrethroid on a warm, sunny day. If the plant is unusually dark, use a horticultural oil to loosen the sooty molds.