What is Sour Rot?

Skip to What is Sour Rot?

Sour rot of grapes frequently leads to loss of grapes in North Carolina, and has rapidly emerged as a key threat to grape production in the wet, humid grape production regions of the Southeastern United States. Often initial berry damage is the cause for the development of sour rot. A combination of invasion by ethanol-producing yeasts and acetic acid bacteria (AAB), fruit flies, and damaged berry skins have been recognized as required agents or conditions for sour rot occurrence. Due to their propensity to crack or break during late-season rains and their greater susceptibility to insect damage, thin skinned cultivars such as ‘Riesling’ tend to be more susceptible to sour rot. Besides heavy rains and insect damage, wounds can also be caused by hail, wind, bird feeding, mechanical cracks, or invasions by fungal pathogens. The disease also tends to be more severe on cultivars and clones of cultivars that have compact clusters since compaction promotes a more wet and humid microclimate. There are no grape cultivars or clones with resistance to sour rot. Site selection, cultivar selection, canopy management, as well as chemical control are the most important methods to manage sour rot in the vineyard. The first disease symptoms can appear any time between veraison and harvest, usually when fruit brix levels reach or exceed 14-15, and daytime temperatures are warm (66-77F). It is important to understand that many preventative steps can be taken to reduce the risk of sour-rot before such Brix level. However, several cultivars (Table 1) are more prone to sour rot than others, and preventative measures will not always mitigate damage. Sour rot results ultimately in a reduction in yield, and a crop that is unsuitable for winemaking. 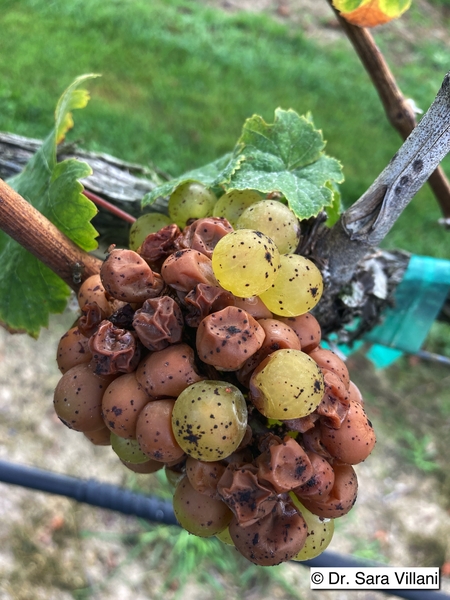 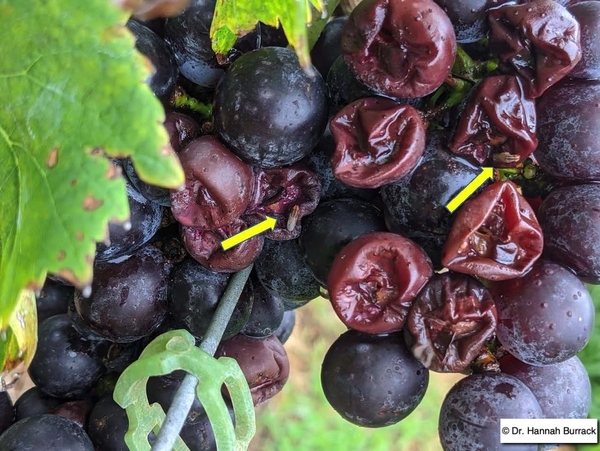 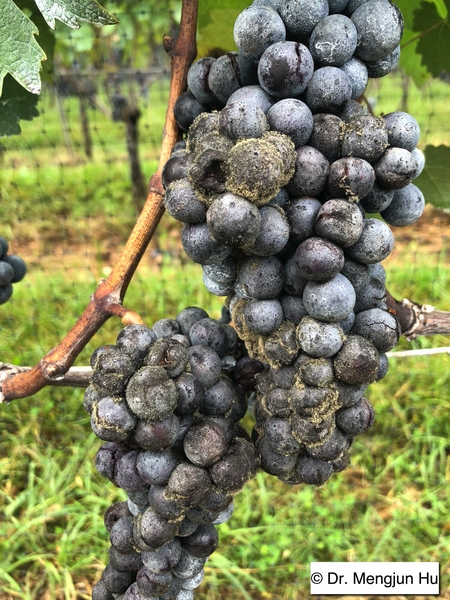 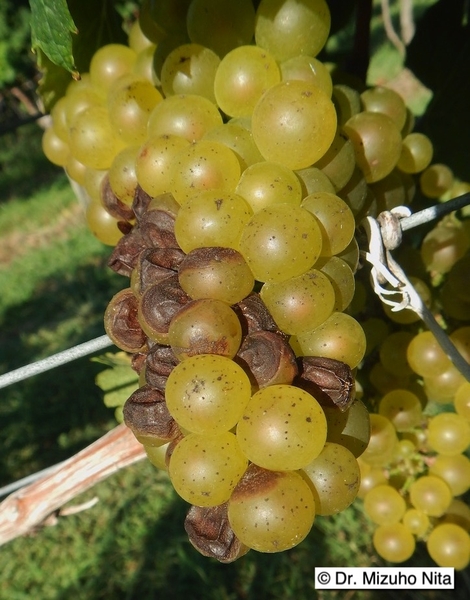 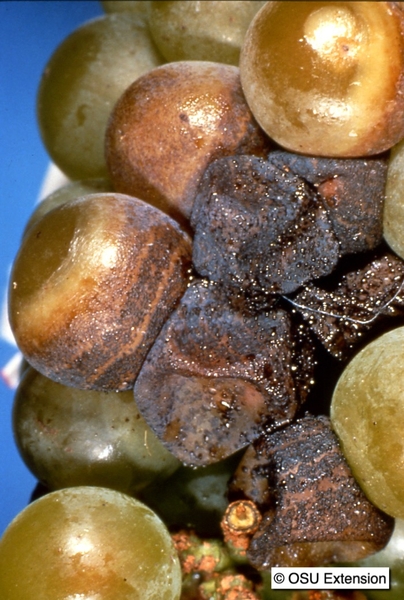 The most obvious indication that sour rot is present is the smell of acetic acid (vinegar) coming from a cluster. Berries usually appear deflated and are mauve/tan in color, and symptoms often appear “patchy” within a cluster (Figure 1). While signs of the bacteria and yeast pathogens associated with sour rot are not normally present, secondary invading fungi or other fungal pathogens such as Botrytis cinerea (causal pathogen of gray mold) or Colletotrichum spp. (causal pathogen of ripe rot), may colonize the infected and degrading fruit and produce salmon, gray, or tan spore masses. Berries may leak due to general berry decay. Fruit flies, attracted to the acetic acid produced by berries, are often present in berries with sour rot and are reported to spread sour rot among grape clusters. It is important to understand that sour rot management begins before the smell can be detected. Mitigating the disease once the smell is detected in a vineyard is a very challenging endeavor, and often the vineyard manager and winemaker decide to harvest the remaining grapes before more damage can be observed. Experienced vineyard managers know the cultivars that tend to show sour rot in their vineyards and act preventatively, e.g. with special attention to canopy management and insect control. In Table 1, we list a variety of cultivars, highlighting in red cultivars that tend to frequently show sour rot in North Carolina.

Table 1. Sour rot susceptibility of several cultivars grown in NC. However, after heavy berry damage, sour rot can occur in almost every cultivar, depending on management. Generally, thin-skinned, tight-clustered cultivars are particularly susceptible to sour rot.

*Clones can vary in susceptibility.

**Not very common in North Carolina.

***Not recommended for North Carolina.

It is important to note that sour rot management is only a portion of an overall vineyard integrated pest management (IPM) program. Such an IPM program entails cultural and chemical methods, used by the vineyard manager to ensure a successful crop. Early preventative fungicide spray programs are the backbone in the Southeast, and will help to reduce the incidence and severity of other diseases that cause lesions or rots on berries. Bunch grape vineyard IPM programs are described in detail in the Southeast Regional Bunch Grape Integrated Management Guide. The level of success of chemical management programs to control sour rot is highly dependent on efforts to maintain full vineyard IPM programs, particularly during seasons which favor high disease pressure. Fungicide, anti-microbial, and insecticide options are listed in Table 2. For the insecticides in particular that are listed in the table below, it is important to practice strategies for resistance management, including rotation with different modes of action, as resistance to some of the active ingredients has been confirmed in populations of Drosophila in other production regions.

In susceptible cultivars, almost every season a compromise has to be made as to when to harvest. Sour rot often is visible in the vineyard when brix and acid levels are not necessarily desirable for wine making. In addition, the incidence of sour rot can increase quickly in a vineyard, therefore monitoring the level of incidence can help determine if spraying is a reasonable course of action, or if the block needs to be harvested early. The vineyard manager and winemaker will have to make quick decisions on whether or not to risk crop loss, or to harvest and adjust wine making targets.