First reported in North America in 1916, the Japanese beetle now occurs in most of the eastern United States. About 1⁄2 inch long, Japanese beetles are a shiny, metallic green with coppery brown wing covers that extend almost to the tip of the abdomen. Small tufts of white hairs occur at the tip of the abdomen and along each side. Eggs are translucent white to cream and elliptical and about 1⁄16 inch in diameter when first laid. In a few days, the egg becomes more spherical and doubles in size. Grubs are white, slightly curled and have yellow-brown heads. Grubs are about 1 inch long when mature. Unlike other grubs found in turf, it has two rows of spines which form a "V" on the underside of the last abdominal segment. The pupa is approximately 1⁄2 inch long and 1⁄4 inch wide, and it gradually turns light brown and then develops a metallic green cast. 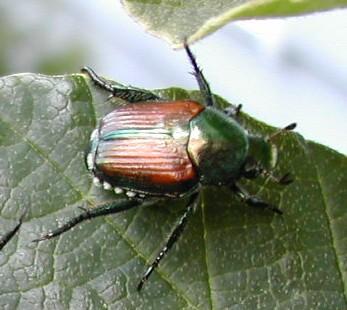 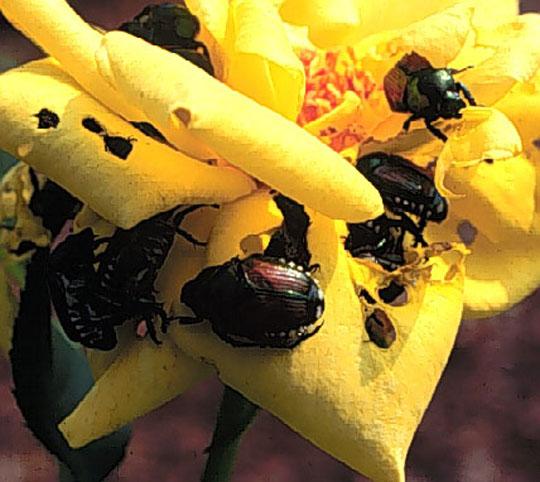 Adult Japanese beetles emerge as early as mid May in eastern North Carolina. Peak emergence occurs in July. Throughout summer, the beetles attack the fruit and foliage of many plants. Japanese beetles feed on over 275 different kinds of shade and fruit trees, shrubs, flowers, small fruits, garden crops, and weeds. Some of their favorite plant species are also commonly planted in landscapes and produced by nurseries. Some of the most common and valuable nursery plants affected are roses, crape myrtle, linden, Japanese maple, ornamental cherry and crabapple, and birch. Japanese beetles eat flowers, foliage, and even fruit. They feed on the upper leaf surface eaten leaf tissue between leaf veins giving leaves a lacy appearance. Beetles will generally consume entire petals of roses and other flowers.

Japanese beetles aggregate in response to odor released by damaged plants and a pheromone released by female beetles. This aggregation and mass feeding can result in severe defoliation of plants. Soon after emerging, female beetles burrow 2 to 3 inches into damp soil and deposit 40 to 60 eggs in small batches. During dry periods, adults may be more attracted to low lying and irrigated areas to lay eggs where soil moisture is higher. In extremely dry weather, many eggs and larvae perish. In warm, wet summers, eggs hatch in about 2 weeks. The newly emerged larvae feed until cold weather forces them into hibernation. One generation occurs each year.

Japanese beetles adults generally become active in late May or early June in North Carolina depending on location and weather. Peak abundance and feeding occurs in late June or early July. Monitoring can easily be done with commercially available bag-type Japanese beetle traps. You can also monitor highly attractive plant species such as roses for the appearance of beetles.

Commercial nursery operators may have little tolerance for damage on plants that will be sold in the current season to keep plants salable. Plants that will not be sold in the current year may be defoliated but will not die and will regrow foliage later in the season. Susceptible nursery plants such as those listed above and in the following references (APHIS pdf, Japanese Beetles on Ornamental Landscape Plants ) should be protected with insecticides to prevent damage in areas where Japanese beetles are abundant. Landscape operators have to gage the tolerance of clients and may want to protect prominent and valuable plants in landscape to prevent damage that leads to complaints. Established plants will not die from partial or even complete defoliation so decisions are based largely on aesthetics.

Flowers and ornamental plants can be protected by dusting or spraying foliage with pesticide. However, a number of plant species are not likely to incur Japanese beetle damage such as oak trees and hollies. For another list of susceptibility of certain woody ornamentals to Japanese beetle damage see the Mississippi State study. Resistant plants can be installed when landscapes are designed to reduce damage and maintenance costs.

Reducing damage by Japanese beetles adults has traditionally relied on repeated foliar applications applications of carbaryl (Sevin) and pyrethroids such as bifenthrin (e.g. Talstar, Onyx), lambda-cyhalothrin (Scimitar, Demand), deltamethrin (e.g. DeltaGuard) or permethrin (e.g. Astro). Carbaryl provides 1- 2 weeks of protection and pyrethroids 2-3 weeks. Protection is due to the residual insecticide that remains on leaves. This kills or deters beetles that try to feed. Management in nurseries of landscapes with these products requires repeated applications and thorough coverage of leaves to maintain effectiveness. These also kill natural enemies and pollinators on plants and can result in secondary pest problems especially mites. A number of systemic neonicotinoid products such as imidacloprid are effective and protect trees for a season or more. Products are available that can be applied by drench or foliar applications in nurseries or landscapes. In general, drench applications should be made a couple weeks in advance of beetle arrival so plants have time to take up the insecticide through their roots and distribute it to leaf material. Drench applications also provide longer protection than foliar applications because plants are continuously taking up insecticide present in the soil or container. However, many trees and shrubs suseptible to Japanese beetles also flower and are attractive to pollinators. Examples include crape myrtle, rose, crap apple, tilia, cherry, and others. Thus, the risk to pollinators should be a major component of the decision-making process.

For assistance with a specific problem, contact your local Cooperative Extension center.​