Management Practices for Controlling Mycotoxins in Corn: A Three-Year Summary

Aflatoxins (AFs) and fumonisins (FUMs) are mycotoxins produced by Aspergillus flavus and Fusarium verticillioides, respectively, that commonly contaminate corn in the southeastern United States. These mycotoxins pose significant health risks to both humans and animals, and are therefore regulated by the U.S. Food and Drug Administration (FDA). A variety of pre- and post-harvest management practices are being explored to reduce mycotoxin contamination in corn.

Aspergillus flavus causes ear rot of maize and contaminates corn and other oilseed crops with AFs. AFs were discovered as the causal agent of an outbreak of Turkey X disease in London in 1960 (Blount 1961). They are among the most potent naturally occurring carcinogens known and have been labeled as Group I carcinogens by the International Agency for Research on Cancer (IARC 1987). They have been implicated in the acute aflatoxicosis outbreaks in Kenya in 2004 and 2005 that caused more than 150 deaths (Strosnider et al. 2006). Due to the adverse health impacts that AFs pose to humans and animals, FDA regulations require grains to have AF levels lower than 20 parts per billion (ppb) for human consumption (FDA 2009). The consumption of AF-contaminated grain by livestock can lead to decreased weight, hemorrhaging, and immunocompromised animals (CAST 2003). FDA regulations require grains to have AF levels lower than 100ppb for animal feed (FDA 2009).

FUMs were described in 1988 after research with F. verticillioides showed that the fungus produced mycotoxins that posed health risks to horses, pigs, and rats (Gelderblom et al. 1988). FUMs cause equine leucoencephalomalacia (ELEM) in horses and pulmonary edema in pigs (Kriek et al. 1981). They are associated with an increased risk of esophageal cancer and neural tube defects in humans who consume large amounts of mycotoxin-contaminated grain (Sydenham et al. 1990). In 2001, the FDA recommended FUM levels of no more than 4 parts per million (ppm) for human consumption (FDA 2001). More information on guidance levels of mycotoxins in livestock feed can be found at the National Corn Growers Association website.

The most effective practice for reducing AF levels in maize has been through the application of biological control agents. Two biocontrol strains, AF36 (=NRRL 18543) and Afla-Guard® (=NRRL 21882), have been registered with the Environmental Protection Agency (EPA) for use on corn. Both are naturally-occurring strains of A. flavus that do not produce AFs. When applied to growing corn, the biocontrol strains outcompete native toxigenic A. flavus, thereby reducing AF contamination (Cotty et al. 2007). In this study, we examined how applying biocontrol agents at two different growth stages and at three different application rates impacted the efficacies of the biocontrols to reduce mycotoxin contamination in maize.

One of the most common genetic modifications made to commercial corn is the incorporation of genes from Bacillus thuringiensis, a bacterium that expresses proteins that are toxic to insects. Current Bt hybrids are effective in controlling corn borers (Ostrinia nubilalis) (Siebert et al. 2012) and corn earworm (Helicoverpa zea) (Buntin et al. 2004; Storer et al. 2001). Bt hybrids can also lessen mycotoxin contamination by reducing insect damage to the stalk and silk (Meyers et al 2015). We examined the efficacy of two common Bt hybrid corn lines, Yield Guard and Viptera, and one non Bt (Syngenta N78S-GT) for reducing FUM and AF levels.

Stratego YLD, a triazole fungicide with two modes of action, was applied to corn at R1, when silks are visible outside of husks, at the recommended rate of 4 to 5 oz/acre. AF and FUM levels were measured and compared to untreated check plots to observe the efficacy of fungicides to reduce mycotoxins.

Did the use of a fungicide increase yield?

Yield results also varied by season (Figure 3). In 2013, the use of Stratego YLD increased yield by 21 bu/acre, whereas in 2015 the use of Stratego YLD did not increase yield. These results are similar to those obtained in other studies (Fawcett et al. 2014) examining the impact of fungicides on corn, which show that results are highly variable and depend on the environment and other factors such as the level of disease in corn. Due to inconsistencies in fungicide studies to reduce mycotoxins, there are currently no recommended applications of fungicides to reduce AFs and FUMs (CIMMYT, 2008). 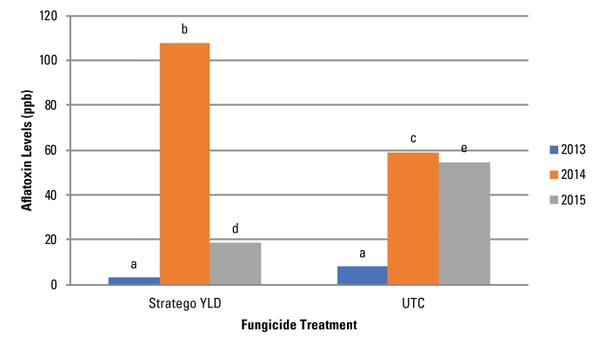 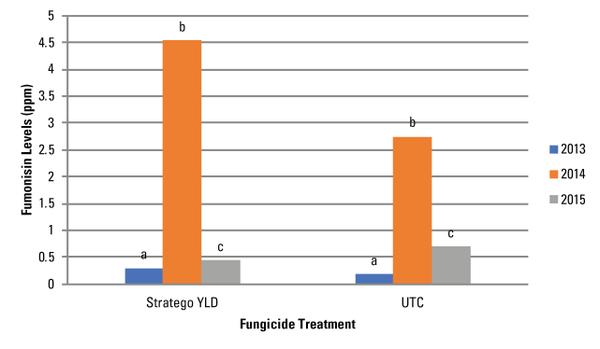 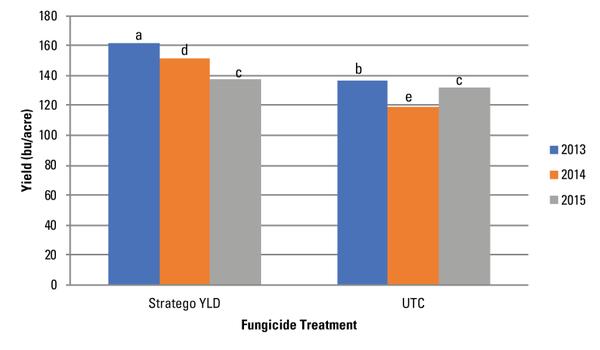 Afla-Guard® and AF36 were applied at two different stages of corn growth: V5, where corn has five fully developed leaves; and VT, where 50% of the tassel has emerged, at rates of 5, 7.5, or 10 pounds per acre (lb/acre). FUM and AF contamination and yield were measured to analyze performance of applied biocontrols. Yield and mycotoxin levels also were taken for non-treated plots that served as controls.

Three Syngenta hybrids, N74R-3000GT (Yield Guard), N78S-3111 (Viptera), and N78S-GT (non-Bt), were tested for performance and benefits against mycotoxin contamination in 2013 and 2014. There were significant differences in AF contamination in 2013. Syngenta N74R (Yield Guard) provided the least amount of control against mycotoxin contamination (65 ppb); Syngenta N78S-3111 (Viptera) provided the best control against AFs (5 ppb); and Syngenta N78S-GT (non Bt) provided moderate control (34 ppb) (Figure 7). In 2014, no significant differences were found for any of the hybrids.

It was difficult to detect FUM contamination differences amongst hybrids due to the very low levels of FUM observed in 2013 (Figure 8). In 2014, however, the Viptera hybrid had significantly less FUM than the non-Bt hybrid. Although there was no significant difference among the hybrids, N78S-3111 (Viptera) still had the lowest FUM contamination at 0.76 ppm compared with N74R-3000GT, which had 1.2 ppm.

The Viptera hybrid (N78S-3111) reduced AF and FUM contamination while maintaining yield. Therefore, this study suggests that corn producers could use Viptera hybrids for the reduction of mycotoxins while obtaining normal yields. 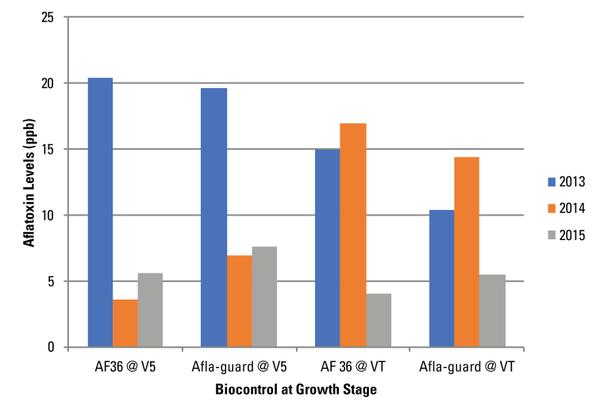 Figure 4. AF concentrations in response to timing of biocontrol application.

Figure 4. AF concentrations in response to timing of biocontrol application. 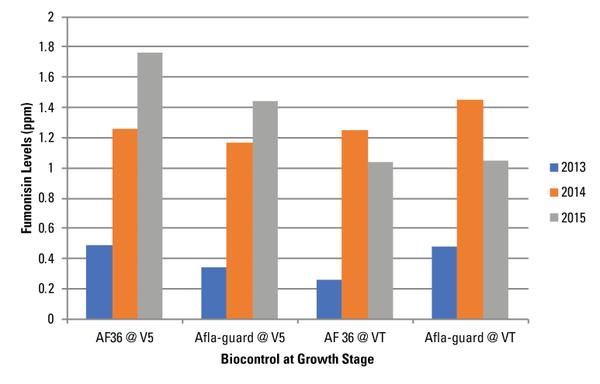 Figure 5. FUM concentrations in response to timing of biocontrol application.

Figure 5. FUM concentrations in response to timing of biocontrol application. 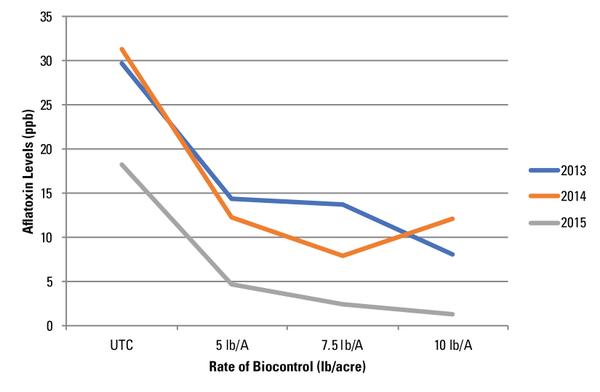 Figure 6. AF concentrations (ppb) in response to biocontrol application rate (lb/acre). In each of the three years, the zero-application rate was significantly higher (P < 0.05) than the other three rates.

Figure 6. AF concentrations (ppb) in response to biocontrol application rate (lb/acre). In each of the three years, the zero-application rate was significantly higher (P < 0.05) than the other three rates. 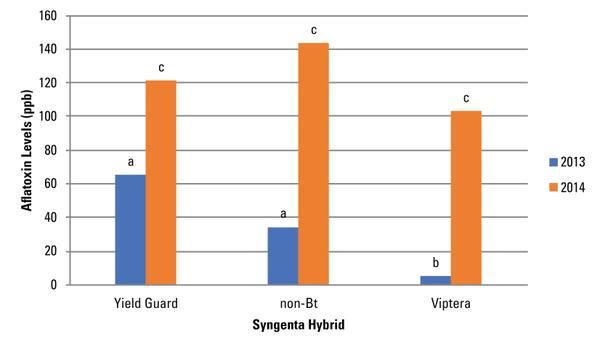 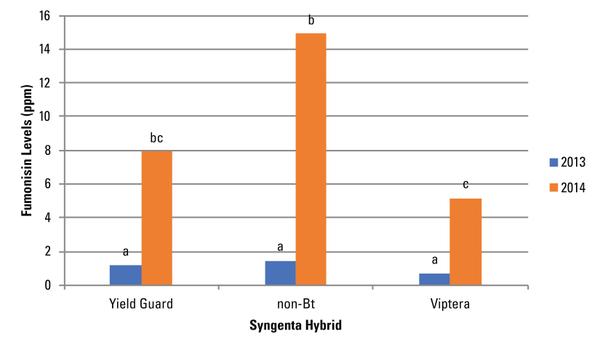 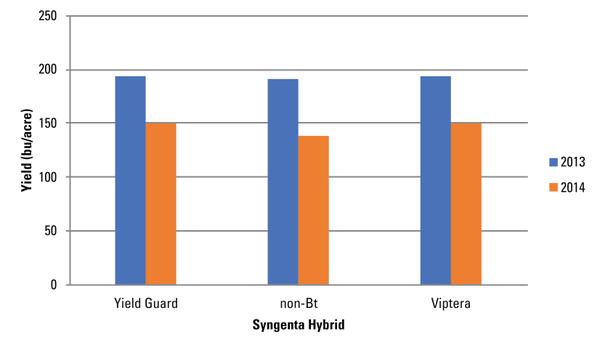 The results from our study show that the use of a Bt hybrid, specifically Viptera, and either biological control product application are the best ways to reduce mycotoxin contamination in a cornfield. Fungicides do not provide control for mycotoxins. Timing of biocontrol application played little role in how effective either AF36 or Afla-Guard® was at reducing AF or FUM contamination. In general, the higher the rate of biocontrol application, the better control of mycotoxins; however, there was no significant difference in the efficacy of the control of mycotoxins or grain yield when the biocontrols were applied at 7.5 lb/acre and 10 lb/acre. The recommended application rate for AF36 and Afla-Guard® is 10 lb/acre, so this reduction in rate of biocontrol would make applying the biocontrols more cost effective for the grower. The Bt hybrid Viptera (N78S-3111) provided control of AF in 2013 and had the greatest reduction of FUM levels over the two-year period. A recommended effective control program for AF and FUM in corn includes the use of Viptera (N78S-3111) and the application of either AF36 or Afla-Guard® at rates of 7.5 lb/acre.