This scale insect is called the Maskell scale, Lepidosaphes maskelli, because it was named after an early entomologist (William Miles Maskell). This is one of the armored scales that sometimes becomes a serious pest of junipers although in this case there may be other factors as well. The armor of female Maskell scales is brown and up to 1.5 mm long and shaped somewhat like an oyster shell. The armor of the males is smaller and slender, but the same color. With an established armored scale population, it is not unusual for most of the scales to be dead (Their armor adheres to the plant long after the insect dies). Not much has been published on the biology of Maskell scales. Undoubtedly, females eggs inside their armor. Eggs hatch 1 to 3 weeks later, depending on the weather. Flat yellow crawlers (first nymphs) emerge from the armor and migrate to find a feeding site. They settle on needles and secrete thin, pale tests (armor). Crawlers molt into second nymphs and then molt again about a week later. After 2 months or so, females begin to lay eggs for a new generation. Adult males have wings and crawl or fly to find females with which to mate. Male armored scales lack mouthparts and soon die after mating. 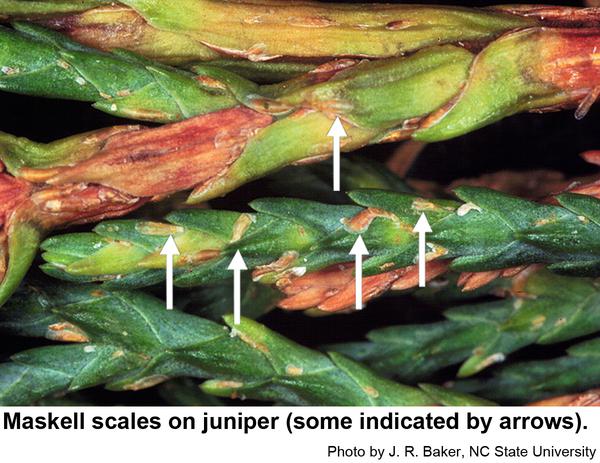 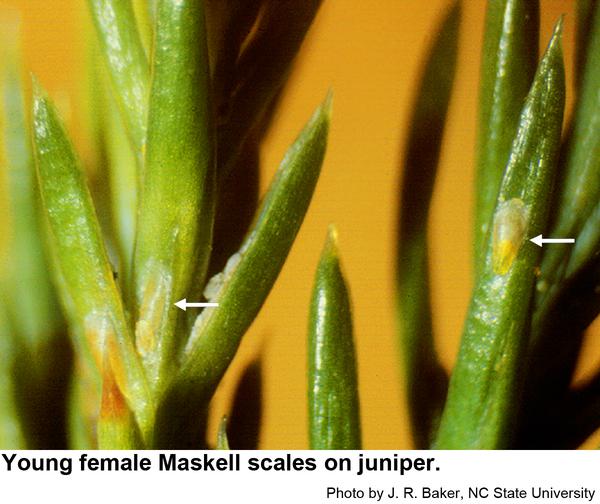 The armor of young Maskell scales is pale brown and almost translucent.

The armor of young Maskell scales is pale brown and almost translucent.

Different species and cultivars of juniper are the most frequently reported host plant for Maskell scales. It has also been collected from arborvitae, Chamaecyparis, Cryptomeria, cypress, deodar cedar, Norfolk Island pine, and red cedar.

Maskell scales are often heavily parasitized by tiny wasps, but they occasionally escape these parasites to become a serious pest of junipers. Infested plants should be treated with one of the horticultural oils at the maximum rate given on the label in cold weather. During the growing season, use the growing season rate. The Juniper Pest Management Calendar gives some idea about the pests of junipers and when is the best time to treat for various pests.

Scout for scales in early spring to monitor for crawler activity. Many natural enemies help reduce scale abundance and damage. If evidence of predation (scales chewed open) and parasitism (circular holes in scale covers) are present you may decide to monitor the populations rather than treat with insecticides or use a product with less impact on the beneficials. When insecticide applications are necessary, dormant applications of a horticultural oil can be made in winter to kill scales on trunks and branches. During the growing season target the crawler stage with horticultural oil, systemic insecticide, insect growth regulator, or other insecticide labeled specifically for armored scales. Imidacloprid does not kill armored scales (even though it will kill soft scales and felt scales). Systemics such as Safari® or Tristar® could help since it is not as critical to target the crawlers. We have also had very good control of many armored scales with the insect growth regulators Distance® and Talus®. Distance in particular has trans laminar activity so it is not truly systemic but moves across the leaf surface into the tissue.