Natural and Constructed Wetlands in North Carolina: An Overview for Citizens

Wetlands are an important natural resource that make up a significant amount of the landscape in North Carolina. They provide many benefits to both the surrounding environment and society. Natural wetlands can occur in many different landscape positions and have diverse characteristics, such as periods of wetness (soil saturation and inundation) and vegetation types. Wetlands are often described by other names, such as swamps, marshes, or bogs, sometimes to capture their different characteristics. For example, a riverine swamp forest (Figure 1) has long periods of standing water and vegetation composed mainly of water-loving tree species, such as baldcypress, black gum, and water tupelo. It looks and functions much differently than a coastal tidal marsh that is flooded daily and covered with salt-tolerant herbaceous plants, such as saltmeadow cordgrass and black needlerush (Figure 2).

However, both ecosystems are considered wetlands because they have three characteristics in common:

The NC Department of Environmental Quality (NCDEQ) Division of Water Resources Water Science Section, and the nonprofit Carolina Wetlands Association provide great descriptions of both how natural wetlands form and many of the common wetlands found here. While wetlands are found across North Carolina, the highest percentage of wetlands are located in the North Carolina coastal plain (perhaps as much as 4 million acres, according to NC Division of Coastal Management estimates).

Until the latter part of the twentieth century, wetlands were mostly regarded as obstacles to people's well-being. Estimates indicate that over 50 percent of the wetlands that existed when colonists first settled our state have been lost. Many were purposely drained and filled for agriculture, development, and mosquito control. Others were damaged inadvertently from nearby activities that resulted in filling by sediment or from pollution. Some people driven by long-standing misconceptions continue to have negative perceptions about wetlands.

But over the past 50 years, researchers have shown that the functions of natural wetlands provide numerous benefits to both society and our economy.

Depending on the type and its location in the landscape, a wetland can provide many services to society. Called ecosystem services, these benefits include the following:

Since the 1980s, federal and state laws have been enacted to provide natural wetlands with more protection. Now when wetlands are impacted, developers may be legally required to replace the lost habitat and functions through wetland restoration or creation. Studies by scientists and engineers have also uncovered many clues to how wetlands remove and transform pollutants, so now wetlands are also being constructed to intercept runoff and wastewater to improve and protect water quality. 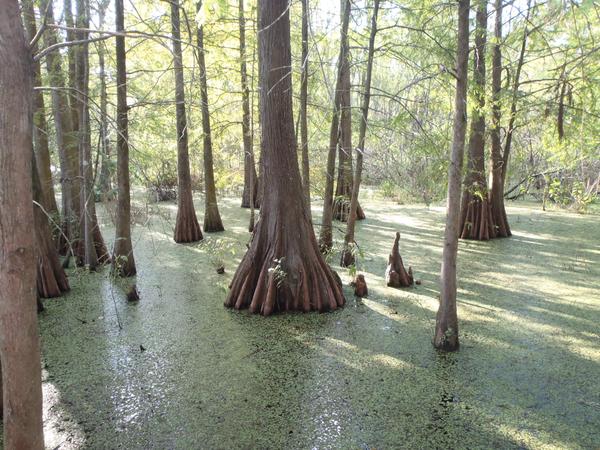 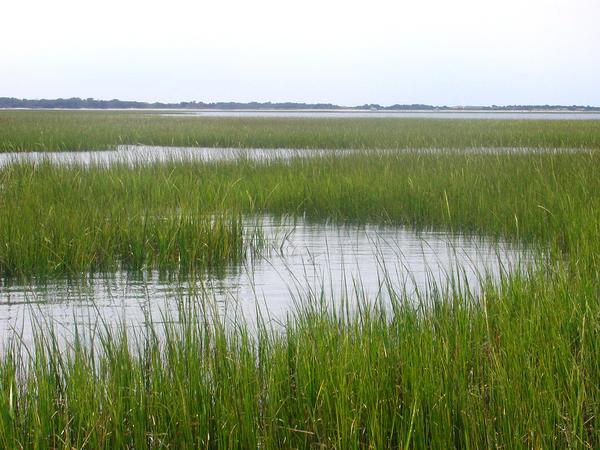 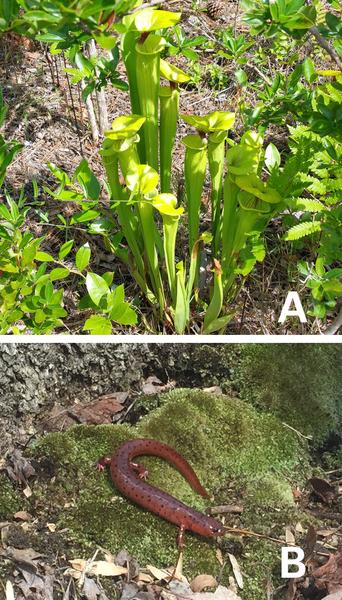 Figure 3. Venus flytraps (A) and mud salamanders (B) rely on the unique conditions that can be found only in some wetlands to survive.

Photos courtesy of J. Kurki-Fox and A. Braswell

Figure 3. Venus flytraps (A) and mud salamanders (B) rely on the unique conditions that can be found only in some wetlands to survive.

Photos courtesy of J. Kurki-Fox and A. Braswell

Alongside natural wetlands in the landscape, there are an increasing number of wetlands that have been built to replace lost natural wetlands, as well as many wetlands that were built to intercept polluted runoff and wastewater to protect water quality. In this section, we define the different types of constructed wetlands.

Figure 4 shows how natural wetlands can be in pristine condition (which is rare), degraded (like most of our remaining natural wetlands), or destroyed. Wetlands are considered as degraded when they have suffered at least some minor degree of alteration to water flow, vegetation, or pollution. Wetlands can be destroyed by draining or filling for development (including roads, shopping centers, housing developments, agriculture, and forestry) or by natural disasters like fire. Wetlands that are impacted by development are required by law to be rebuilt elsewhere. In North Carolina, that process is overseen by the NCDEQ and the U.S. Army Corps of Engineers. Sometimes, wetlands that were degraded or destroyed long ago are also rebuilt through efforts from many national and state conservation groups (like the NC Coastal Federation).

Rebuilding degraded or destroyed wetlands to achieve the original wetland type and functions is called wetland restoration. Restoration is generally the preferred method of replacing lost wetlands. To successfully rebuild a wetland, the hydrology (how wet it is) and the structure (soil types and vegetation community) first must be accurately estimated from similar nearby natural wetlands. Careful planning and understanding of the type of wetland to be built is crucial for the long-term development and success of restored wetlands. Wetland restorations often require some combination of earth moving, changes in water management (like plugging drainage ditches), and replanting of desired wetland plant species. An example of these restoration techniques was demonstrated in 2003 at a Carteret County site that had been previously converted from a wetland to row-crop agriculture by draining and clearing the land in the 1970s (Figure 5).

In some instances, it might make sense to build a different type of wetland than the one that was originally on a site because the surrounding landscape or downstream water body will benefit from a different habitat or function (such as water quality improvement). A project to build a wetland of a different type than the original or in a location where a wetland may not have been present before is called wetland creation. The prototypes of created wetlands are still natural wetlands, and even more careful planning is critical to ensure a successful project. Such was the case at the North River Farms Preserve, which was previously converted from a shrub-scrub wetland to row-crop agriculture. Project partners decided to create a highly productive salt marsh rather than restore the estuarine shrub-scrub wetland that had been drained for agriculture (Figure 6).

Natural wetlands have been studied for decades for their ability to capture and transform many pollutants. In the correct landscape position, wetlands have been shown to intercept surface and groundwater and slowly release it over time. This interception allows particles of soil or debris to settle out and accumulate in the wetlands, releasing visibly cleaner water. Wetlands also can trap sediment-bound pollutants, like excess metals and phosphorous. Vegetation often grows readily and accumulates over time in wetlands, creating an environment that is high in organic matter and microbial activity. Alternating wetting and drying creates unique oxygen conditions in a wetland that stimulates microorganisms within to transform many pollutants in order to survive. For example, nitrate, which is a common form of nitrogen fertilizer often found in runoff, can pollute rivers and lakes. But when intercepted by wetlands, nitrate can be used by certain microorganisms instead of oxygen to survive when wetlands are flooded. As the water passes through the wetlands, the nitrate is transformed by the microbes into nitrogen gas that escapes to the atmosphere (the process is called denitrification), and the water leaving the wetland is less polluted. We now try to take advantage of the unique abilities of natural wetlands by constructing wetlands in strategic locations to intercept and treat polluted water.

Stormwater runoff from developed urban areas can deliver significant amounts of water, often flowing at high velocity, directly to local streams or other water bodies. Constructed wetlands have been increasingly used over the last two decades to slow and store some of that water, much like natural wetlands do. These wetlands used in urban areas are known as stormwater wetlands and are one of several measures used by towns to reduce the effect of stormwater runoff. Wetlands not only slow runoff, but research shows they also store sediment and debris, trap phosphorous and metals, and reduce the amount of nitrogen transported downstream.

The design of these stormwater wetlands is based mostly on natural depressional wetlands with emergent (meaning rooted in the soil but can survive in ponded conditions) and floating herbaceous aquatic vegetation. Stormwater wetlands are referred to as “event-based” wetlands because they are designed to fill with water only after rainfall and to drain nearly completely within two to four days. They are often located in high visibility areas, such as near shopping centers, schools, and parks, and contain multiple varieties of wetland plants that can withstand wetting and drying periods. The plants in stormwater wetlands often include flowering varieties that can provide an aesthetically pleasing amenity to the landscape (Figure 7).

Wetlands can also be used to help treat more high strength municipal and industrial process wastewaters. These wetlands are known as treatment wetlands and are less common here when compared to stormwater wetlands. Treatment wetlands provide critical treatment of more polluted wastewater as part of an overall treatment plan for wastewater at several towns (including Walnut Cove and Aurora) and as part of other agricultural and waste management facilities. 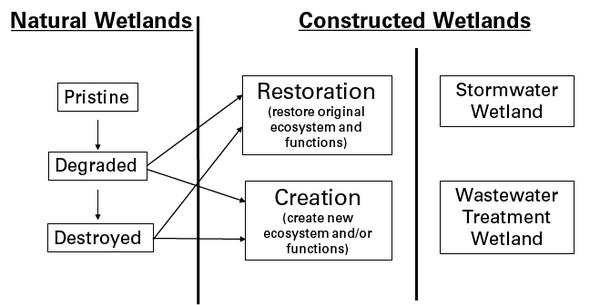 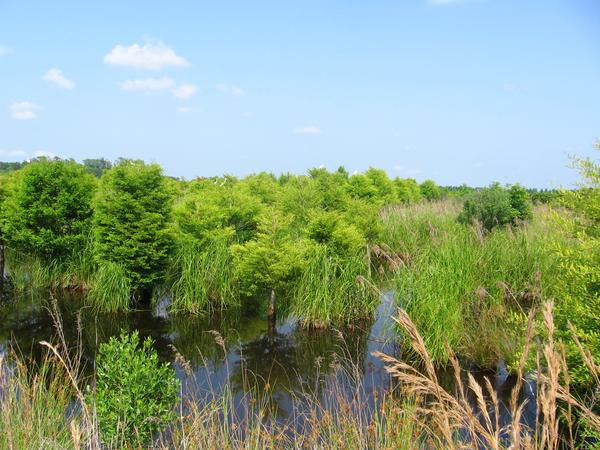 Figure 5. A six-year-old wetland restoration in Carteret County. Notice the young baldcypress trees that were planted, and the herbaceous wetland grasses that reestablished naturally.

Figure 5. A six-year-old wetland restoration in Carteret County. Notice the young baldcypress trees that were planted, and the herbaceous wetland grasses that reestablished naturally. 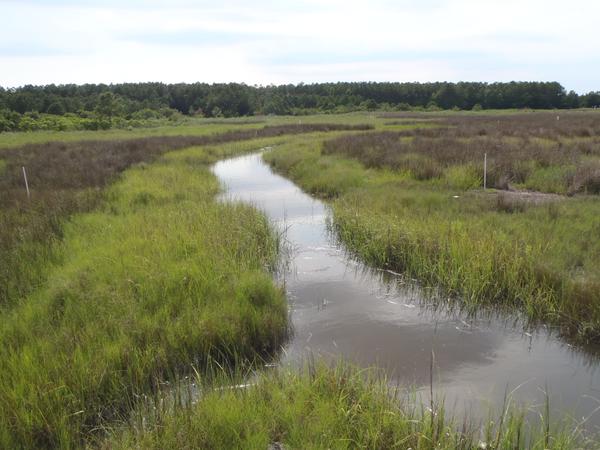 Figure 6. A five-year-old wetland creation in Carteret County. Rather than restoring the historical wetlands, a brackish marsh was created instead to improve habitat for shellfish and finfish.

Figure 6. A five-year-old wetland creation in Carteret County. Rather than restoring the historical wetlands, a brackish marsh was created instead to improve habitat for shellfish and finfish. 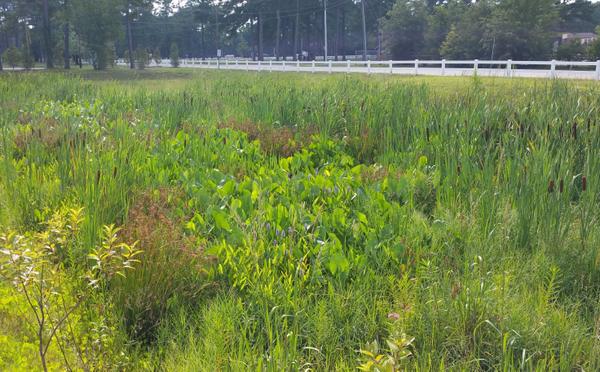 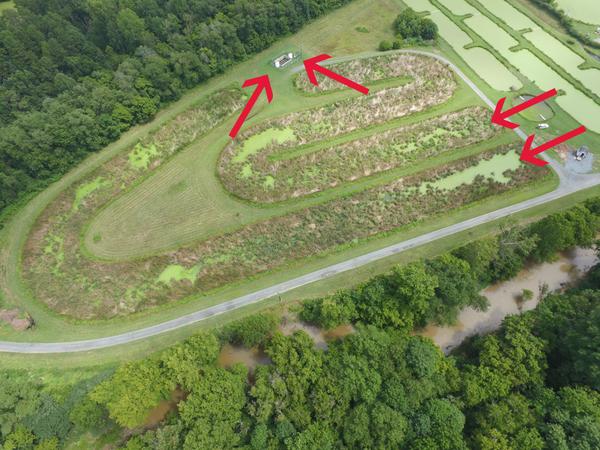 Figure 8. Treatment wetlands in Walnut Cove. Wastewater enters the two wetland cells (top right), passes through the wetland in four to eight days, then is discharged through a disinfection chamber (top center).

Figure 8. Treatment wetlands in Walnut Cove. Wastewater enters the two wetland cells (top right), passes through the wetland in four to eight days, then is discharged through a disinfection chamber (top center).

North Carolina still has millions of acres of natural wetlands that are important components of our rich natural resources. Efforts continue to replace wetlands lost to development through wetland restoration and creation. Stormwater and treatment wetlands are also being designed and constructed to use their natural ability to reduce many pollutants in water. Scientists and engineers continue to study how to most effectively build successful wetlands so these resources can provide the most functions to society.

Unfortunately, wetlands are often misunderstood or ignored by many of the people they serve. Chances are, as you travel here and in other states, you often pass right by a wetland of some type. We hope this publication will help you to spot these wetlands, identify whether they are natural or manmade, and enjoy the services they provide.

Skip to Resources and Acknowlegments

We would also like to thank the reviewers of this publication: