Skip to Materials and Methods

This study was conducted across 15 North Carolina locations from 2014 to 2018 (Table 1). At each location, all treatments were planted by the Soybean Extension Team with a John Deere vacuum planter on 15-inch row spacing at ~130,000 seeds/A. Preplant fertility was applied based on soil test recommendations, and the herbicide program was based on cooperating grower standard practices. No over-the-top fungicides or insecticides were applied by the cooperating grower. Each treatment was evaluated in four replications per location. The nonfoliar products evaluated are shown in Table 2. Grain was collected using a small-plot combine. Soybean yield data is reported at 13 percent moisture. All data was analyzed using PROC Mixed in SAS 9.4. Estimate statements were used to compare treatments to a nontreated control. We consider a P-value <0.10 significant.

Fungicide seed treatments: When we combined data over locations, we found that the use of a fungicidal seed treatment did not impact soybean yield (P=0.69). Most of these trials were planted in June or July (Table 1). It is possible that fungicidal seed treatments would have had more impact with earlier planting dates, when conditions are generally cooler and wetter, which can intensify seedling diseases. The Soybean Extension Program has a collaborative project with Bill Foote, director of the N.C. Crop Improvement Association, and Lindsey Thiessen, an NC State Extension pathologist, in 2019 and 2020. We are evaluating the value of fungicidal seed treatments at earlier planting dates (mid March through early May) with varieties varying in germination (72 to 92 percent).

Inoculant seed treatments: Soybeans can fix their own nitrogen through a symbiotic relationship with bacteria (Bradyrhizobia japonicum), which can convert atmospheric nitrogen (N2) into a plant useable form. For this reason, soybeans are often not fertilized with any additional N fertilizer, and farmers generally depend on N-fixation and residual soil N to fulfill soybean N demand. There has been recent interest in the value of inoculating soybeans to promote N-fixation. In this trial we evaluated two seed-applied inoculants. These two inoculants, Optimize LCO XC and TagTeam LCO XC, provided a slight yield advantage over the nontreated control (+1.1 bu/A, P=0.12). Other trials conducted by the university also have shown modest yield increases from the use of the Optimize inoculant product (Marburger et al, Do Crop Rotation and Tillage Influence Seed-applied Inoculant Decisions?). Seed-applied inoculants are relatively inexpensive ($5 to $6/140,000 seeds). Previous work by NC State Extension Professor Emeritus Jim Dunphy would indicate that in-furrow inoculants are generally more effective than seed-applied inoculants. It is generally believed that inoculating soybeans is more valuable on a field that has not produced soybeans for four to five years, rather than one where soybeans have been grown consistently in the rotation.

Biological seed treatments: BioForge is a biological plant growth promoter marketed by Stoller that claims to promote early root growth by reducing stress. We evaluated this product as a seed application over five years in this study and found that it did not impact soybean yield (P=0.60). Other university research has found that BioForge applied both as a seed treatment and a foliar treatment was more effective at increasing soybean yield than when it was used as a seed treatment alone (Staton, Bio-Forge Effects on Soybean Yields in Michigan).

In-furrow fungicides: The use of Quadris, Proline, and Headline did not impact soybean yield across locations (P=0.69, P=0.43, P=0.83), however Priaxor did increase soybean yield (+1.6 bu/A, P=0.04). It should again be noted that the trials were generally planted in June and July (Table 1). In-furrow fungicide use might generate a larger impact on yield with earlier soybean planting dates when environmental conditions could be more conducive for disease development. In-furrow fungicides are best used in locations with high disease risk (cool, wet soils), as fungicide resistance develops rapidly in soilborne fungi populations. Continued use of products with the same fungicide chemistry could result in fungicide resistance, which would make future disease management more challenging.

Fertilizer applications: There is some question about the necessity of fertilizing soybeans directly with nitrogen as we push yields higher, so the evaluation of both ESN and ammonium sulfate applications in soybeans was of interest to growers in North Carolina. In this trial, the use of ESN at planting or pre-bloom did not impact soybean yield (P=0.99). Likewise, the use of ammonium sulfate at planting did not impact soybean yield (P=0.26). Many field experiments conducted in North Carolina have shown that inorganic N fertilizer applications to effectively nodulated soybeans were rarely profitable. A nationwide publication on the value of adding inorganic N to soybean was recently released: Soybean Response to Nitrogen Application Across the U.S. This study found that in most locations, N fertilizer application had a minimal effect on soybean yield and that this practice would rarely return profits. 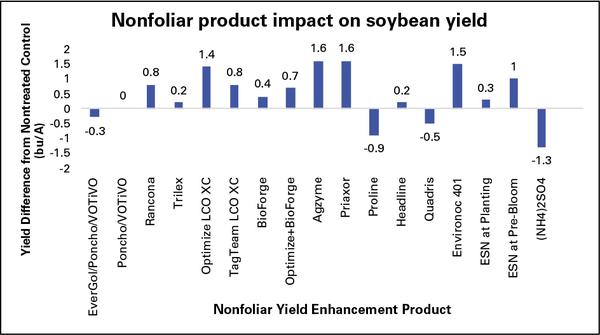 Over the years, the nonfoliar yield enhancement products evaluated in this program have provided modest soybean yield increases, if any. Our evaluation of these products across 15 locations is context specific to late May through early July planting. Many of these products are relatively inexpensive. However, growers must decide if the modest increases in soybean yield observed with some of these products coupled with the risk of resistance development would justify investment.

This research was funded by the North Carolina Soybean Producers Association and their checkoff dollars.