The drivers for demand with organic row crop acreage in North Carolina are similar to those for conventional acreage, due to the fact that the state remains a center of production in the U.S. for tobacco, sweetpotatoes, and livestock. Opportunities still exist in the state around organic feed and sweetpotato production while opportunities in organic tobacco acreage in North Carolina are declining. These shifts are due to a decrease in market demand for organic tobacco while market demands for organic produce and meat are steadily increasing.

In a report from the USDA dated April 2017, market demand showed a steady increase in organic food sales in every category from 2005 to 2017. This growth continued even during the economic downturn in 2008 to 2013. It is a reasonable expectation that organic sales will continue to increase. There is also evidence showing that organic sales are becoming more mainstream, meaning that it is likely that organic food will continue to grab more market share of total food sales in the future.

Organic sweetpotatoes remain a viable and marketable crop, as there are contract options available to growers. Market demand does not appear to be the limiting challenge to organic sweetpotato production. State geography and infrastructure needs pose greater challenges as the crop requires well-drained soil types and controlled postharvest storage space.

Production levels of organic tobacco continue to be on a downward trend as contract reductions with many growers in the state have been reduced by 50 percent or more annually since 2016. Based on a follow-up with growers who participated in a 2016 tobacco labor survey, many have shifted entirely by either leasing their organic land, going away from organic production all together, or making efforts to develop rotations around grain or sweetpotato production.

Developing and marketing niche products on a profitable scale is a challenge, though some growers have succeeded in alternative grain products such as rye and barley. These products often carry a higher marketing risk due to fewer potential buyers, and many times these opportunities exist around seed production, supplemental feed grains, or grain for human consumption. Those budgets are not included in this publication but are available upon request.

Several sample rotation scenarios in Table 14-2 below are listed to better define what the factors of success are from a business perspective and how this connects with the agronomic needs of managing organic acreage. These sample rotations represent actual rotations of organic farms currently operating in North Carolina. 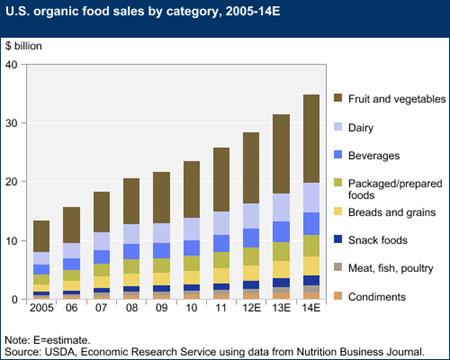 Farm East is in a droughty, coarse-textured to medium-textured soil with minimal slope, uses irrigation, and has just over 1,500 organically certified acres out of 1,750 total acres. Farm East also has 250 conventional vegetable acres. The rotation is driven by the strategic placement of organic tobacco acreage and the flexibility that continual cover cropping brings to the system. While cereal rye is not a relatively significant contribution to income, Farm East has three viable uses for cereal rye that include seed sales, harvest for organic grain, and seed saving for their own farm. This rotation allows Farm East to recuperate some cost in bad years should grain quality be poor, and it provides additional income in years when grain quality is good. Sudangrass and sunn hemp cover crop total cost is at or below $100 per acre, and the use of this blend provides an additional weed control and nitrogen credit to help offset the opportunity cost of a fallow cover on years when the land is not planted in a harvestable summer crop.

The producer’s goal at Farm East is to develop a system where the land is as productive as possible; however, this is a particular challenge in an organic system where cultural controls, such as fallow cover, are the focus of limiting insect, weed, and disease pressure. Farm West often makes a trade-off between keeping cash crops on the best acreage with higher yield potential for a shorter rotation inducing higher pest pressure versus keeping a longer rotation. The longer rotation often means putting crops on relatively moderate land with less yield potential but less pest pressure. Organic sweetpotatoes bring in additional income in this long rotation system, which is of key importance to blending farm management and agronomics to develop higher per-acre profit.

Farm East has a well-kept history of detailed pest problems for strategic decision-making on rotations. Wireworms, nematodes, and weeds (particularly Amaranthus spp.) are the three biggest agronomic threats that Farm East faces. The expectation is that one of these problems will create losses on some acreage on most years. Sweetpotatoes are likely to experience the loss of 10 to 20 percent of Jumbos or off grades that would have normally sold elsewhere. Tobacco will take a 10 to 20 percent yield loss depending on the rotation year and the particular challenges of that specific acreage. These losses are measured against the best acreage on the best years.

Farm West has a clay or clay-loam soil type, moderate to steeper slopes, access to irrigation when needed, and has 120 certified organic acres out of 600 total acres. The remaining 480 acres are in a conventional tobacco rotation along with wheat and soybeans. The goal of the organic grain rotation is to keep the land covered constantly with a productive crop that can be harvested and reduce weed pressure though competition. Decisions are aimed towards keeping a smaller farm profitable when new farmland is difficult to find. Farm West’s organic acreage was organic tobacco acreage that is being shifted to all organic grain acreage as the owner seeks to remain diversified in marketable products and keep the valuable organic land certified. Having conventional acreage in a cash crop rotation and having access to irrigation are buffers against the risk of crop losses in organic grain.

The weed problems for Farm West have been limited to Amaranthus spp. and morningglory. Weed issues can make some acreage difficult to harvest by doubling the time it takes to harvest. The owner of Farm West is the sole operator of the combine, so the cost is limited to time, fuel, equipment hours, and maintenance. Weed management practices include planting timing, plant population, and cultivation. Farm West works with alternative seed sources for organic seed that are half of the cost of conventional seed, so even doubling plant population brings seed cost to what a producer might expect to pay for conventional seed.

Additional cultivation is a significant cost in any organic system. Farm East and Farm West strive to make as few passes as possible from a cost management perspective. Some creative ways they indicate they have been able to achieve this is one pass of more traditional implements, such as a moldboard plow, to achieve similar results resulting from two passes with implements such as a heavy disc. Farmers in both systems are experimenting with some acreage to test ways to alter and improve cultivation practices without jeopardizing a significant portion of their acreage. These tests included good recordkeeping that tracked rainfall, weed pressure, disease pressure, insect pressure, crop sequence timing, cost comparisons, and yields. This was critical to defining success, as they had learned that anecdotal evidence was more likely to be skewed than keeping good records.

These budgets are an estimate of the full economic costs and returns for organic grain production in North Carolina. The budgets are based on but one set of many possible cultural and management practices that could be used in the production of organic grain. The most common cultural and management practices in North Carolina were used as the basis for the costs and returns shown in the budgets. Specific farm conditions will vary considerably, which affects both cost of production and yields. Organic production may have more variation in yields and price than conventional production systems. These budgets are only intended to be used as a guide to developing costs and returns estimates for your farm’s specific situation. Individual farmers are encouraged to develop their own cost and return for their organic grain crops. Each individual budget includes estimates of gross receipts, variable operating costs, and fixed costs for that crop. Budgets are a guide to what particular costs and returns are expected to be, on average, for a representative farm over time and at similar locations. The budgets provide estimates of costs and returns for one year for one crop. An enterprise budget for a specific crop cannot take into account the effects of various crop rotations, which could greatly affect the production practices, costs, and returns. Note also that the fixed costs include the costs associated with the transition from conventional farming to certified organic status. Farm overhead costs are not considered, including any cost or charge for land. The measure of profit is returns to land, management and risk.

Gross receipts are estimated from expected prices and normal yields. Yields were estimated to be 25 percent lower than for conventional production methods of the same crop. This reduction in yields was based on personal conservations with producers and industry sources. Over time, experienced growers should expect to see yields improve to near conventional yields under good growing conditions. Price discovery is more difficult for organic production due to the smaller number of buyers.

Variable costs are those costs that will change based on the level of production. For example, increased production will require higher levels of soil fertility. Because most organic grain is not sold at harvest, drying, and storage costs for three months are included in budget. The machinery costs are based on new equipment prices for the year in which the budget was developed. Used equipment has lower ownership costs (depreciation, interest on investment, tax, insurance) but has higher annual repair and maintenance costs. Labor costs depend on the farm situation. Some activities may require extra hired labor with the associated additional expense, while on another farm the activity might be performed by the owner. A labor charge is included in the budget to reflect either the cost of hiring someone to perform the work or the minimum return the owner wants for his or her time.

The fixed costs include machinery and equipment ownership costs and amortized transition costs. The ownership costs of machinery and equipment are depreciation, interest on investment, taxes, and insurance. The transition cost reflects the fact that, during the transition period, cultural practices must be altered to come into compliance with the organic rules, Type of crops grown and crop mix may need to be changed to meet soil fertility and weed management constraints. It is expected that costs increase and revenue decreases because yields are reduced and crop products cannot be sold as organic. The transition cost is estimated by the difference in organic and conventional revenue and costs during the three-year transition period. This transition cost can be thought of as an investment in certified organic production and, as such, it should be amortized over the farmer’s planning horizon. In these budgets, the estimated transition cost was amortized at 8 percent over 10 years and listed as a fixed cost of production.

The budgets included in Tables 14-3 through 14-7 do not include irrigation or land rent. Irrigation costs can vary from $75 to $150 per acre in total cost, depending on the number of times required to irrigate and the type of irrigation. In organic grain where corn prices are $10 per bushel and soybean prices are $20 per bushel, the yield increases that timely irrigation brings do not take long to pay for themselves. Each grower must take the time to investigate their cost and returns based on the history of their acreage.

Land rent is highly variable and is often higher for cash crop rotations as this is often the best and most sought-after land. Land rent for conventional grain is reported to vary from $50 to $150 per acre. This is a rough estimate for cost considerations and should not be used as a standard assumption for lease agreements. Each landowner and grower should seek legal guidance when entering into an agreement for rent.