The female obscure scale, Melanaspis obscura, is light yellow to cream color, but her armor is a shallow dome about 1/8 inch in diameter. The armor is dirty gray, with a black cap that is slightly off center. All other stages, including the eggs, are pink but are hidden by their gray armor. After hatching, the new nymphs crawl about and settle down to feed on sap through slender mouth parts that are longer than the rest of the insect! This stage is called the crawler. Very soon after settling down, the crawlers secrete their armor. Because of the extending hatching period, crawlers are found from July through September. Obscure scales overwinter as nymphs on host twigs and branches. Females mature during late April through early May, whereas males mature during mid- to late May. Infestations are most easily recognized by layers of dead scales encrusted on branches. Males emerge from beneath their armor, mate with females, and then die. Over the next several months, females lay about 50 light pink eggs. Early hatched crawlers usually settle beneath the waxy cover of dead scales to feed, while those that hatch later usually seek uninfested areas. Only one generation is produced each year. 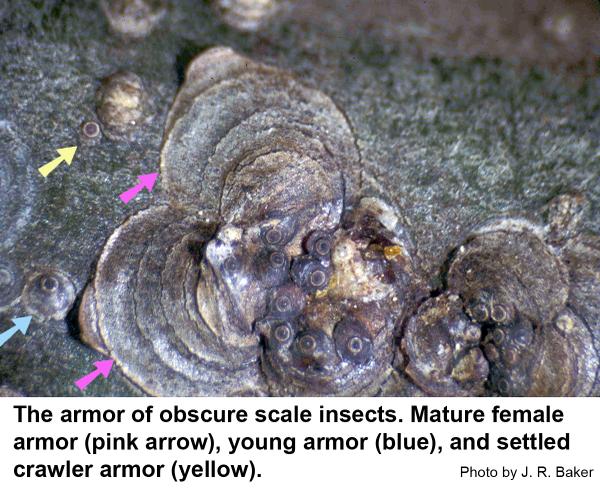 Obscure scale armor usually blends in with the bark of the host tree.

Obscure scale armor usually blends in with the bark of the host tree. 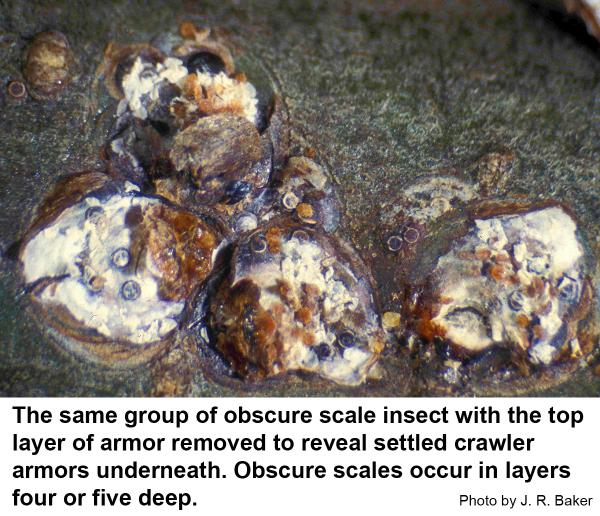 Obscure scale infests oaks as well as beech, dogwood, hickory, maple, and willow. This scale insect is primarily a landscape pest. Obscure scale can be a debilitating pest of oaks in the landscape. It can cause twig dieback and decline.

It may be better to improve the vigor of an infested tree rather than treat obscure scales. Take a soil sample from under the infested trees and submit it to the NCDA&CS Soils Lab. If the pH or nutrients are out of balance, the soil should be amended according the the test results. (Don't just apply a bunch of 10-10-10. Too much nitrogen may make things worse.) During periods of prolonged drought stress, the tree should be irrigated. Consider killing the grass under infested trees and mulching that soil to conserve soil moisture and keep the roots cool. In other words, do anything within reason to enhance the vitality of the trees. It is known that trees under stress have more simple sugars (rather than starches) and more free amino acids (rather than more complex proteins) in the sap. Thus stressed trees are more nutritious to the scales than healthy trees. The bark of unsprayed trees is like a microscopic zoo with all sorts of predaceous mites, predaceous insects, parasitic fungi, parasitic insects and other organisms in addition to the scales. By getting the tree into top growing condition, it should be less susceptible to the scales and the scales will not reproduce as prolifically. As a consequence, the parasites and predators may control the scales almost completely. However, in the short run, it may be better to spray with one of the horticultural oils to knock down of the scale population. Spray with 2% oil during the growing season and 4% oil next winter after the tree is completely dormant.