Paper wasps eat a lot of insects (usually caterpillars) and should be considered beneficial to the landscape most of the time. Paper wasps are best known for their open, grey paper nests built under an open porch ceiling, window sill or some type of overhang (Figure 1). In this nesting phase of their life cycle, paper wasps can be defensive and are likely to sting if the nest is disturbed.

However, paper wasps show types of swarming behavior during the cool and cold times of the year when there are no nests and no young larvae to protect. During the fall, this behavior is connected with mating and is the wasp version of "boy meets girl." Male wasps look for the best place to "hang out" and attract females. On these warm days during the fall, the future queens become active and fly about. Dozens or hundreds might be seen around the upper stories of a building, transmission tower or other tall structure (Figure 2 and Figure 3). Frequently, they are seen banging around the TV news cameras mounted atop buildings or bridges during the broadcast. Males locate a good perch on which to sit and become somewhat protective of this spot as they release odors (pheromones) to attract that certain special female wasp for mating. Activity is usually associated with tall structures that might include the NASA launch pad towers, amusement park rides, grain storage structures, or transmission towers. It is not totally understood why tall structures are attractive to the wasps or why they choose certain structures over others. Structures may be substitutes for tall trees or rock formations especially in relatively flat land. It is common for a house that stands taller than others in the neighborhood, to have wasps swarming about while there are none at any of the neighbors' homes. Communication tower climbers, grain bin workers, roofers and others with similar jobs that take them atop tall structures, may be uncomfortable and at risk, primarily due to the height at which they work, rather than the threat of being stung. At some time after mating, the males die and the females seek a shelter for the winter. 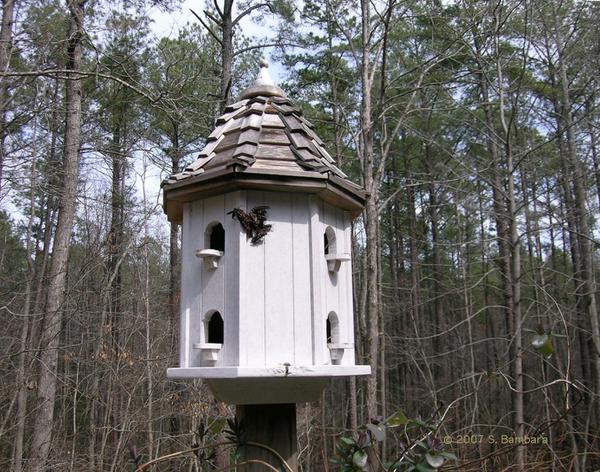 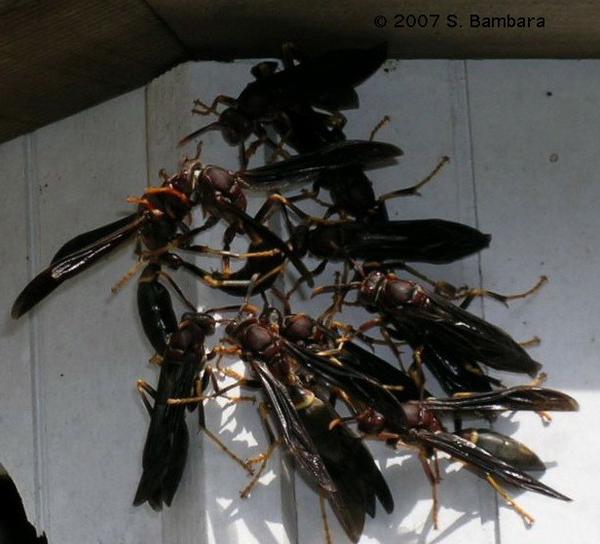 Paper wasps are social insects with behavior similar to bumble bees. A new nest is built each season usually by a single female (sometimes more than one) who becomes the queen for the colony. As new offspring develop and the colony size increases, the offspring take over the major duties of food collection, caring for the young, nest maintenance and defense. The colony does not remain active and intact throughout the year, but disbands before winter begins. Only selected females will mate during the fall swarming rituals. Then, as the temperatures become cool, brood rearing and food gathering comes to a close. The nest disbands and these newly mated female wasps seek shelter for the winter in protected places such as attics, wall voids, hollow trees, bird houses, wood piles or similar settings. Sometimes they form small clusters, but there is no nest. Only the mated females survive until next spring.

During winter and early spring, on any warm day (about 70°F) , these wasps may become active. If they are in a wall void, chimney or vent, for example, and move toward light, they may unknowingly move to the inside of the structure rather than to the outside. Slow moving wasps may be found crawling about the floor or window area inside a building. Wasps that enter a house may not be immediately noticed and, be accidentally stepped upon or caught in clothing. The risk then becomes unknowingly contacting the wasp and possibly being stung.

On these occasional warm days during the winter hibernation period, when the future queens become active and fly around, the swarming paper wasps are not particularly defensive and are unlikely to attack. This flying behavior disappears at the end of the day went temperatures become cool again and wasps resettle.

Within a hibernating cluster of mated females, a different social behavior develops. As the wasps emerge from hibernation, some females show new behaviors. There is challenging and gesturing for dominance. Dominant females in clusters have both larger bodies and ovaries. Stingers and abdomens may be brandished at each other. In spring when the average temperatures are consistantly warm enough, a single or sometimes pair of females will begin a new nest and start to lay eggs for the upcoming season. Usually the dominant wasp from in the autumn cluster becomes the main queen in spring after the nest has been started. Sometimes an established, but poorly defended nest can be taken over by a more dominant female.

For management indoors during winter and spring, wasps may be crushed with a shoe, fly swatter, or rolled-up newspaper. Aerosol pesticides will work, but they cost money and unnecessarily expose people to insecticide in the home or dwelling. Preventive measures of caulking or screening around window sills, exhaust vents, and gable or attic vents will reduce the number of entrance points for wasps to access the structure and eventually come indoors. A self-release aerosol spray used in an enclosure, such as an attic may be partially effective when temperatures are above 60°F, but excluding them in the first place is more desirable than using chemicals. Self-release aerosol spray "bombs" are a potential fire/explosion hazard in some circumstances, so we generally do not recommend them.

"Pest-strips" impregnated with the insecticide DDVP (dichlorvos) might be used in unoccupied structures or spaces (such as attics or storage buildings), but otherwise increases the risk of human exposure to the chemicals. Do not use them where people would spend no more than four hours daily. We do not promote their use in houses and care must be used in storrage areas with little air movement. Those areas need to be well-ventilated before entering and working. Label directions must be followed. A vacuum cleaner could be used on a cold day to suck up wasps. The wasps should then be disposed of before warming up too much and becoming active.

Tower climbers, roofers and other workers normally already wear appropriate clothing that protects arms, hands and head. Remaining calm and not overreacting to an unrealistic 'threat" is more important. An aerosol spray may give a brief period of relief to a few particularly nuisance wasps. However, using an aerosol spray, paritcularly on windy days, could cause the chemical to blow back on the applicator and dropping the can from a structure could be dangerous to persons or property below. The fear of being stung during this time of year is probably a bigger distraction and danger than the wasps actually pose. Remember that during the winter and cold early spring, when there is no nest to protect, the wasps are not very defensive. Male wasps as may be present in high numbers during the fall mating activity and are unable to sting.

Makino, Shun'ichi. 1989. Switching of behavioral option from renesting to nest usurpation after nest loss by the foundress of a paper wasp, Polistes riparius: A field test. Category Short Communications. Jour Ethology. Vol. 7, No. 1.

Using Paper Wasps for Caterpillar Management in the Landscape.

For assistance with a specific problem, contact your local Cooperative Extension center.​