Pine needle scale insects, Chionaspis pinifoliae, overwinter on the needles in the egg stage under the armor of the dead mother scale insect. These reddish brown eggs hatch in the spring. Tiny reddish-purple crawlers emerge from under the old armor and crawl around for a while before settling down on the needles to feed, secrete the characteristic white armor, and grow. When mature, tiny males emerge and crawl or fly to find females with which they mate. The females eventually lay up to 40 eggs that hatch into a second generation. The second generation matures later in the summer and will ultimately produce the overwintering eggs. 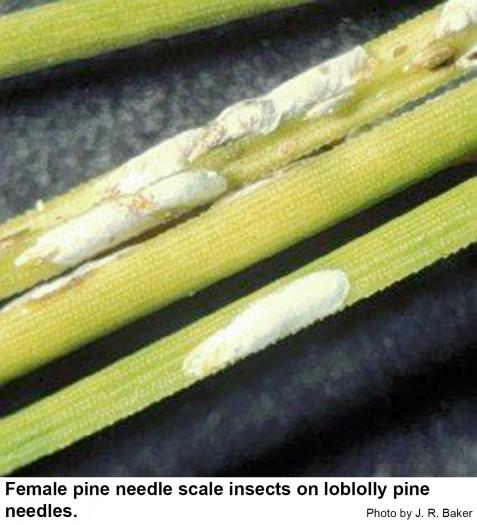 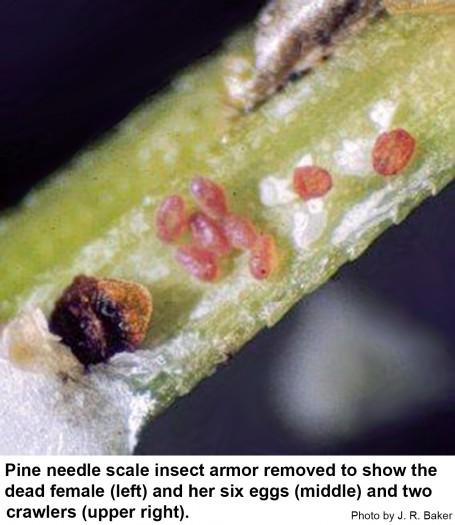 Pine needle scale eggs are found under their mother's armor.

Pine needle scale eggs are found under their mother's armor. 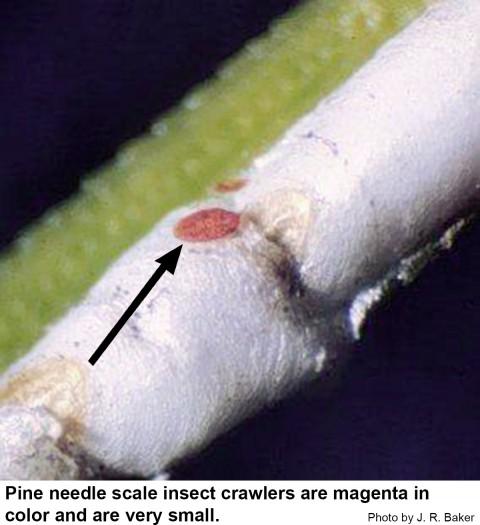 The most frequently damaged host plants are the mugo pine and Scots pine. Other pines are infested to a lesser extent. Pine needle scale has also been found on spruce, firs, Douglas-fir, and cedars. Pine needle scales are most damaging to ornamental pine plantings. Heavily infested pines become sickly yellow and suffer premature needle drop and twig dieback.

Pine needle scale is not worth treating if the population is low. However, if there are lots of scales on each needle, it may wise to treat as the scales are certainly not helping the plant. Heavily infested pines become unthrifty and may die back from the tips. If control measures are warranted, work done by Dr. Warren Johnson at Cornell University some years ago showed that pine needle scale insects are susceptible to oil sprays. Use a 4% oil spray during the winter and a 2% oil spray later on in the summer.