Raspberries are relatively easy to grow once you understand the growth habit. The raspberry plant has perennial roots and crowns, but thier canes (shoots) live for 2 years. The first year canes produce only leaves as they emerge from the ground, these canes go dormant in the winter. In the following spring, these second year canes, produce flowers and fruit, and after fruting the cane dies. These types of raspberries are known as summer fruiting types. In North Carolina summer fruiting raspberry cutivars will produce fruit in June and July.

A second type of raspberry known as everbearing and will produce fruit on the tips of the first year canes. Everbearing cultivars can produce fruit from late July through October. They can also produce a small crop on the second year canes, just below the area where they stopped fruiting in the fall. 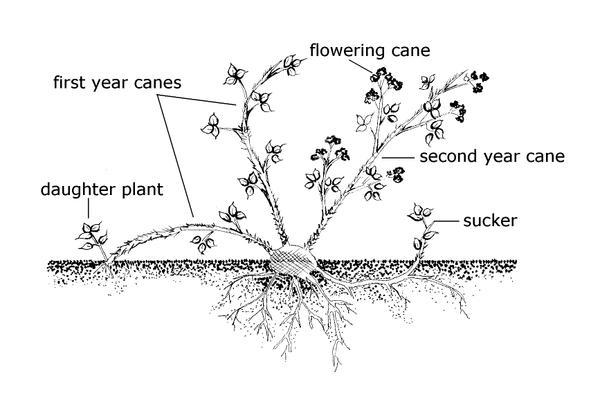 Parts of a raspberry plant.

Parts of a raspberry plant.

Homeowners in the mountains have the greatest selection of cultivars to choose from because the cooler summer temperatures are more favorable conditions for raspberries. A list of suggested varieties can be found in Table 1. Cultivars listed as everbearing can produce two crops a season. New cultivars, including yellow raspberries, that are not listed in the table are worthy of trial especially in the mountains. 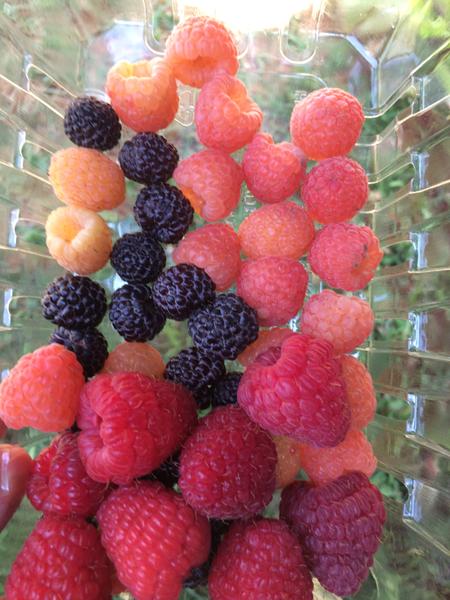 Raspberry fruit can have a wide range of colors.

Raspberry fruit can have a wide range of colors.

Skip to Soil Testing and Planting

It is best to test the soil four to six months before planting to allow adequate time to amend the soil based on test results. An ideal pH is 6.0. If the pH is too low, raise it to the level suggested by the soil test with dolomitic lime.

Keep plant roots moist until planting time by either heeling them into the ground temporarily or wrapping them in wet burlap. Do not leave the roots exposed to the drying effects of sun and air.

Prepare a planting hole large enough to allow the roots to spread out naturally. Do not prune the roots except to remove damaged ones. Set plants at the same depth they were planted in the nursery. The crown (the point where the stem and root merge) should be one inch below ground level.

After planting, tamp the soil firmly to remove air pockets around the roots. Water all new plantings well, immediately after planting.

Before planting, spade or till into the bed 1 pound of 10-10-10 fertilizer per 100 square feet of soil. Cultivate by hand and hoe between rows to a depth of 1 to 2 inches to prevent suckers from taking hold. Mulch with lawn clippings, pine straw, or pine bark.

Skip to Training and Pruning

Red raspberries tend to sucker and spread. As most of their fruit production is concentrated in the top one-third of new shoot growth and should be trellised.

Thin fruiting canes in late winter or early spring before they start to grow. Remove all weak canes and thin the strong canes so they are 4-6 inches apart over the width of the row; narrow rows if necessary to 15-18 inches wide.

Remove fruiting canes at the end of harvest. Do it soon after harvest, to help control diseases. Make cuts close to the ground, also thin new shoots at this time, leaving 3 or 4 of the sturdiest canes per ft of row. If you use a single wire or one wire above the other type trellis, or stakes, tie the canes loosely to the support structure after summer pruning.

Dormanred and Latham red raspberries have to be trellised. The first year canes should be tied to a stake or trellis after the second year canes have produced their crop, so the soil can be cultivated or mulched. Train Dormanred and Latham to a vertical trellis with a narrow wall of foliage. Space posts 20 feet apart and attach wires at a 5-foot height (Figure 1). This trellis system is suitable for most other red raspberry types as it will ease harvest and increase yields.

Caroline and other everbearing types may be annually pruned by simply mowing or cutting off all canes at or slightly below the soil surface late each fall. The following spring, new shoots (first year canes) will begin to grow. These canes will produce fruit on the tops in late summer through early fall. To delay the crop, the first flush of first year canes can be pruned to the ground when they reach a height of 12 inches or topped when they are approximately 30 inches.

For everbearing varieties, use a crossbar or horizontal trellising system. Two-ft crossarms are attached to the posts at a height of about 4 feet, and two wires are secured at the ends of the arms (Figure 2). The new canes will grow between and be supported by the wires with a minimum of tying. Remove first-season blooms to help plants get established and increase vegetative growth. Do not attempt to produce a crop the first season.

To get a second crop from everbearing varieties, do not prune the canes after they have fruited at their tips. They will produce a crop lower on these canes the following year, before the fruit from the newly emerged canes ripen. Once the canes have produced two crops prune them to the ground. Use a trellis system as described for Dormanred if you choose to allow these varieties to fruit twice a year.

Black raspberries do not need to be trellised at all. They are treated much the same as erect blackberries. Summer prune by pinching back in June when new shoots reach 18 to 24 inches. It is sometimes necessary to do this a number of times, as not all shoots will be tall enough for pinching on the same date. Terminal (end) growth stops when shoots are pinched back, but the three to five buds below the pinched area develop vigorous lateral growth. This allows the canes to become self-supporting.

After harvest, remove canes that have just fruited. In winter before growth starts, cut back side branches, leaving two to six buds (8 to 12 inches long) per cane. Remove very small canes (Figure 3).

Figure 1. Red raspberry trellis for Dormanred variety. Wires are set at 5 feet above the ground. Treated posts are spaced 20 feet apart and set at least 24 inches into the ground.

Figure 1. Red raspberry trellis for Dormanred variety. Wires are set at 5 feet above the ground. Treated posts are spaced 20 feet apart and set at least 24 inches into the ground. 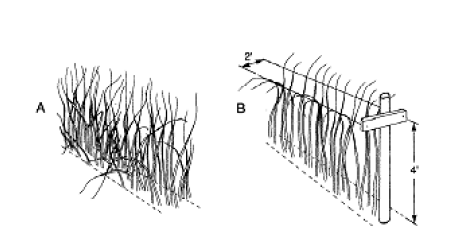 Figure 2. Everbearing raspberries may be allowed to grow untrellised (A), but crossbar trellising (B) is recommended. Set crossbars to space the wires 18 to 24 inches apart and about 4 feet above the ground.

Figure 2. Everbearing raspberries may be allowed to grow untrellised (A), but crossbar trellising (B) is recommended. Set crossbars to space the wires 18 to 24 inches apart and about 4 feet above the ground.

Figure 3. Black raspberry plant (A) before and (B) after dormant season pruning.

Figure 3. Black raspberry plant (A) before and (B) after dormant season pruning.

Harvest twice a week when fully ripe. Ripe berries will easily separate from the plant. Pick in the morning when the air is cool and berries are firm.

Keep plants in rows free of weeds by hand weeding, hoeing and cultivation or with a mulch. Raspberries may be grown under clean cultivation, sod or permanent mulch. Mulch usually provides adequate weed control and does not compete with the raspberry root system. The average homeowner has many organic residues that can be used as mulch, such as lawn clippings, leaves, or shredded vegetation.

If you grow raspberries under clean cultivation, the area between rows is cultivated to a depth of 1 to 2 inches at intervals of 2 weeks from early spring to end of harvest. This controls weeds and red raspberry suckers in the row. If you use sod culture, mow the area between one row like a lawn throughout the summer to control growth of weeds, grasses and suckers. Where a permanent mulch is used, mow at timely intervals to control raspberry suckers between the rows.

Highest yields will likely be obtained with permanent mulch. Clean cultivation is next highest yield, and sod usually results in the lowest yield, but is easy to maintain for a homeowner.

In colder regions of the state, canes and buds of some raspberry cultivars will be winter injured if left up in the air in an exposed condition. In late fall untie canes from the trellis wires or stakes and lay them on the ground before the ground freezes to protect them from winter injury. Covering the canes with mulch should not be necessary

Plants need about 1 inch of water a week from bloom time to end of harvest. Plants should also be watered during prolonged dry periods after harvest as well. When watering, add enough water to wet the soil to a depth of 6 to 8 inches.

Use in the Landscape

Skip to Use in the Landscape

Raspberries can make effective hedges or boundaries. Their canes are green red or purple and they have white flowers in the spring and summer. Most varieties sucker profusely and will need to be contained by cultivation or mowing.

Raspberries contain a significant level of vitamin C and are a rich source of soluble fiber.

Skip to Diseases and Insects

Many insects and diseases damage raspberries. You can avoid many pest problems by: