In North Carolina, wastewater from a variety of sources is land-applied to recover its beneficial components. Nitrogen (N), phosphorus, potassium, organic matter, calcium, magnesium, manganese, copper, and zinc, as well as the water itself, are all beneficially used for crop production. Wastewater can be land-applied using a variety of techniques. Spray irrigation, a common method, can release odor-causing gases or cause drift of fine droplets that transport odor-causing gases.

Another related undesirable issue is the loss of gaseous ammonia (NH3) during wastewater application. Ammonia in the soil readily converts to plant-available N forms, ammonium (NH4+), and nitrate (NO3-). One thousand gallons of anaerobic hog lagoon effluent contain about 4 to 6 pounds of total N. Irrigation of anaerobic hog lagoon effluent can result in loss of one-third to one-half of the applied N through ammonia volatilization (Balla 2007). Although some organic gases in wastewater are likely the predominant cause of odor, ammonia is a pungent gas that can also contribute to odor during land application. Loss of ammonia reduces the fertilizer value of the effluent. Ammonia losses can adversely affect public health and the environment, so methods of reducing ammonia loss during application can help reduce losses of other odorous gases and mitigate the impacts.

North Carolina requires permits for the land application of all types of wastewater — agricultural, municipal, and industrial. Confined livestock farms exceeding a certain size (for example, 250 or more pigs) that use liquid waste management and nondischarge methods of waste disposal are covered by the Waste Management System General Permit (NC EMC-DEQ 2019). The General Permit does not allow wastewater to reach surface waters or wetlands as runoff or drift. However, under certain circumstances, farms that are eligible for coverage under the General Permit may be required to apply for an individual permit. North Carolina regulations also limit ammonia emissions from swine farms (deemed permitted or permitted) using liquid waste management to an annual average of 0.9 lb of ammonia-N per week per 1,000 lb of steady state live weight (SSLW), which includes an annual average of 0.2 lb ammonia-N per week per 1,000 lb SSLW from land application (North Carolina Administrative Code 15A NCAC 02T.1307, 2018). Odor regulations that apply only to permit conditions that deal with odor are usually general in nature and state that the manager should control objectionable odors and not cause a public nuisance. Regulatory actions regarding odor are complaint-driven, requiring an on-site assessment if siting requirements are not met (North Carolina Administrative Code 15A NCAC 02D .1802, 2000). If the state performs an on-site investigation and finds that the odor complaint is valid, a best management plan to reduce the likelihood of additional odor complaints will be required. The plan can include management decisions or changes in equipment, or a combination of both. More detail on these options follows. However, new or modified swine farms, built to increase SSLW after February 28, 1999, are required to meet numerical odor thresholds (North Carolina Administrative Code 15A NCAC 02D.1808, 2019). All facilities regulated under the state General Permits (swine, wet poultry, and cattle) must complete an Odor Control Checklist and keep a copy on file. Once an odor control measure is indicated on the Odor Control Checklist, it becomes part of the operator’s permit. Therefore, only measures currently in place should be indicated on the checklist, and new checklists should be filled out upon addition of any odor control measure.

Factors That Affect Drift and Odor

Skip to Factors That Affect Drift and Odor

All types of wastewater, regardless of degree of treatment, contain some odorous compounds. Odor is generated during wastewater application when dissolved odorous gases are released into the air or when fine effluent droplets evaporate, releasing the dissolved gases into the atmosphere.

Droplet size: Droplet size is governed by operating pressure, nozzle size, and nozzle type. As the droplet size increases, the potential for odor loss decreases since a lower fraction of the dissolved odorous gases is released into the air. Similarly, increasing droplet size leads to lower drift since the heavier droplets are less likely to be transported off-site by the wind. Hence, application systems that create finer droplets increase the potential for drift and odor movement. Some systems apply wastewater in a “flooding” pattern, such as the hose-drag system (Figure 3), with which there are fewer individual droplets leading to reduced odor and drift.

Contact time between wastewater stream and air: To obtain greater wetted area coverage, irrigation systems discharge wastewater relatively high above the ground surface and at angles up to 45 degrees above the horizontal. Due to the height and angle of discharge, dissolved gases in the wastewater have more time to be released to the air. Higher operating pressures required for such equipment cause formation of smaller droplets that further increase odor losses and drift compared with wastewater released closer to the ground and at lower pressures. Drift and odorous gas release are further increased by wind speeds that increase with height above the ground.

Weather conditions: Weather parameters that affect drift and odor include wind speed and direction, temperature, relative humidity, and atmospheric stability. These parameters interact in a complicated way with one another and may have opposite effects on drift and odor. Higher wind speeds increase drift; however, they dissipate odor. It is not advisable to apply wastewater using sprinkler irrigation methods when the wind direction can transport drift toward neighbors’ houses or streams. Drift increases in warm and dry (low relative humidity) weather because the droplets lose moisture faster while moving through the air and can be transported farther. Although warm temperatures increase the activity of odor-causing bacteria, land application in warm weather will result in faster dissipation of odor due to greater turbulence. Increased relative humidity also increases the perception of odor.

The atmosphere is stable when the air close to the ground is colder and heavier than the air above it. This usually happens during early morning, evening, and through nighttime, when winds are lower. Land application under stable conditions will trap odors close to the earth and spread­ them sideways, affecting neighbors. However, drift is reduced under such conditions due to low wind, cool temperature, and high relative humidity. As the sun heats the ground, the warmed air rises upward, causing mixing, thus creating unstable conditions. Unstable conditions may cause more drift, but less odor, because of better dissipation of gases.

Environmental conditions can affect drift and odor in different ways, making management difficult. It is generally recommended that spray application of wastewater should be done under low wind conditions (less than 5 mph) and after mid-morning, preferably in bright sunshine.

Several factors should be assessed when determining what type of wastewater application equipment is best for a given situation. Some of the options listed in Table 1 offer excellent control of drift and odor, but they may be impractical where large volumes of wastewater must be handled. The need for odor and drift control must be balanced with equipment costs and management requirements.

The need for odor and drift control may require a field-by-field decision because it is related to the area where wastewater application occurs. Are there neighbors nearby? Is the site close to high-impact areas that have large numbers of people, not necessarily at once but continually (for example, historic sites, parks, or hospitals)? Have there been complaints and, if so, what is the frequency of these complaints? If complaints or regulatory pressure have been low, then simple solutions such as proper irrigation timing or a vegetative windbreak may be all that are needed.

Any type of management strategy that affects the type of crop or tillage must complement the farm's existing erosion-control plan and animal waste management plan. Further, soil incorporation may have limited value, as drift and odor can occur during application. Incorporation immediately after application can better control odor than allowing a waste product with persistent odors to remain on the surface. Most irrigated wastewater will soak into the soil and usually not result in persistent residual odor. In taller vegetation, odor may persist longer than on bare soil, because as the liquid intercepted by the vegetation evaporates, odorous gases are released. Wastewater with higher solids content can present persistent odor problems. For those materials, soil incorporation in coordination with the animal waste management plan may be a good odor control measure.

There are many factors to assess when selecting wastewater application methods. Along with odor and drift, you must consider cost, ease of operation, applicability to the site, and maintenance requirements. Table 2 gives some general guidance for various land application systems. The system types listed in Table 2 are not exactly parallel to those in Table 1. Table 2 defines the systems by category, without focus on the specific nozzle or sprinkler types that can be used with each system. 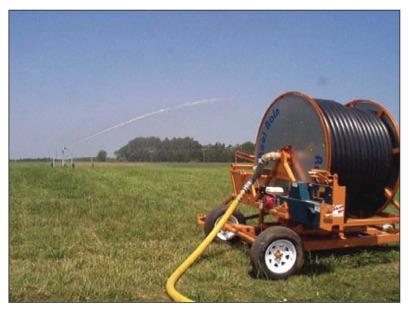 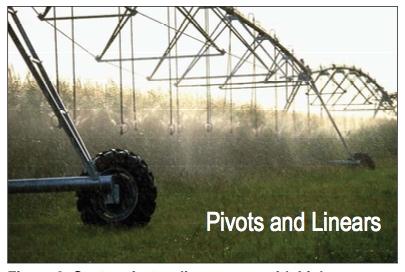 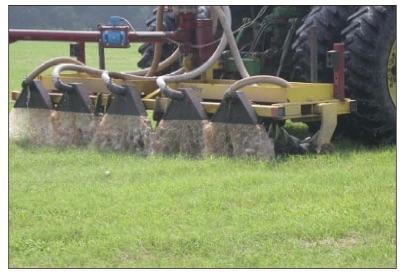 Many factors affect the potential for drift and odor from a wastewater application system, as well as the potential for such drift to become a problem for the community or environment. Drift and odor are affected by application equipment choices such as equipment type, operating pressure, nozzle type and size, “add-on” choices, and discharge angle (and height). Weather factors such as wind speed affect both drift and odor; however, some weather factors that can increase drift (such as high temperature and low relative humidity) can reduce odor. An operator should evaluate both management and equipment factors to help with odor and drift control.

This publication is a revision of an earlier version. The authors would like to thank D. Crouse and K. Shaffer for their earlier contributions.