Fields infected with high root knot nematode populations may display symptoms of non-uniform stunting, wilting, and chlorotic patches. At lower population levels aboveground symptoms may be difficult to observe. The wounding caused by root knot nematodes increases the likelihood of a disease complex with other soilborne pathogens, e.g. Fusarium spp., as well as hinder the uptake of water and nutrients. Yield in regions with damaging nematode populations will also be reduced.

The most characteristic sign of a root knot infection is the galling found on the roots (Figure 2). Inside the galls female nematodes and egg masses are present. To help distinguish between root knot galls and nitrogen fixing nodules, running a finger along an infected root system will dislodge nodules from the roots. Root galling caused by root knot nematode is a physical swelling of the roots and cannot be easily removed. The appearance of galling is not diagnostic of the different species; however, the severity of the galling is typically higher in M. enterlobii and M. incognita race 4. Distinction between species cannot easily be done through morphological observation or symptomatic differences, and a molecular assay is needed to determine the Meloidogyne species. 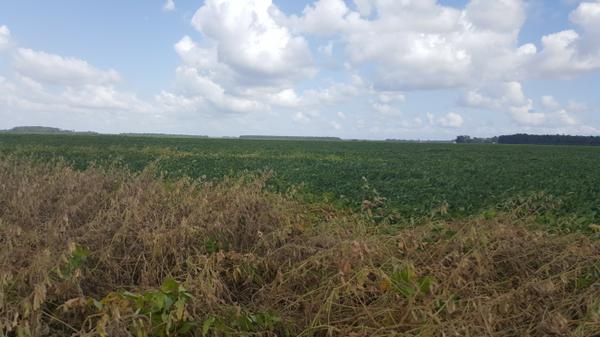 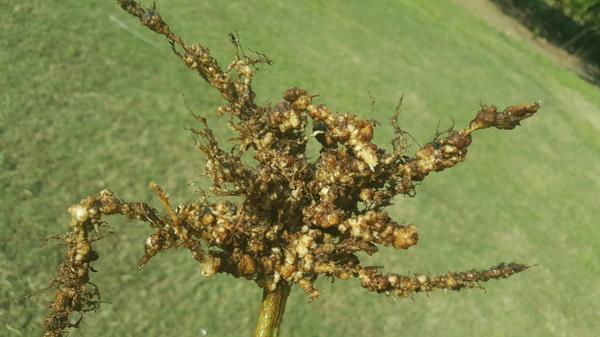 Nematode samples should be taken from 4-5 acre plots when attempting to diagnose large fields as nematode populations are not evenly distributed. Using a soil probe collect 20 to 30 soil cores at a depth of 6 to 8 inches from each area in a zigzag pattern. Place samples in a plastic bag and place in Nematode Assay box, which can be obtained from your local county extension agent. If samples cannot be sent within a few days, store at a cool temperature (do not freeze or leave in the heat). Nematode samples are best when taken in the Fall when populations are higher, and sufficient time is available to develop a management plan for the following year.

Infected plants and roots may also be sent to the NCSU Plant Disease & Insect Clinic to be examined. The benefits of sending samples to the clinic is that other nematode and disease problems contributing to crop loss or damage can be identified. When sending samples (preferably entire plants with some soil) include an accurate crop history, information about fertility, herbicides, and cultural practices to aid in diagnosis.

The life cycle of root knot nematodes is typically between 21-25 days; however, reproduction can occur as fast as 14 days under optimal conditions. The juvenile nematodes first molt occurs within the egg and emerges as a second stage juvenile (J2), the infectious stage for root knot nematodes. The J2 is attracted by root exudates and penetrates the root near the tip (at the area of cell elongation). The juvenile then becomes sedentary and secretes chemicals that create giant cells that create the appearance of galling. Juveniles become adult nematodes after three more molts within the roots. Male nematodes will leave the roots while the balloon-shaped female remains feeding on the giant cells and laying eggs into an egg sac. Under favorable conditions juveniles will hatch immediately from eggs, otherwise they will remain dormant. Eggs can survive in soil for several years until favorable conditions for hatching arise.

The first step to management is sampling and mapping areas with root knot nematode pressure. Being aware of the root knot nematodes distribution throughout a field can help identify ways to prevent spread. Nematodes can be moved mechanically by field equipment, vehicles, and workers. Sanitizing equipment between affected fields minimizes the chances of moving nematodes from one field to the next. Removing or destroying plant material that allows nematode reproduction after harvest will help decrease nematode populations in the next season. The wide host range of root knot nematodes makes crop rotation difficult. However, rotating with poor host crops for nematode reproduction can help decrease populations.

Chemical control is not usually cost-effective in soybean. While less cost effective, the fumigant 1,3-dichloropropene is also available and is an effective control for root knot species. Aldicarb is also available as a non-fumigant option, but significant restrictions are on the label for use.

Selecting a root knot nematode resistant variety is the most cost effective tool for soybean nematode management. Many resistant and moderately resistant varieties have been tested for most root knot species; however, less is known about variety resistance against the newer more aggressive species M. enterlobii. For more information about variety characteristics, the Soybean Variety Selection Tool has information on varieties in North Carolina and their disease resistance packages.

This factsheet was prepared by the NCSU Field Crops and Tobacco Pathology Lab in 2019.