The hemlock rust mite, Nalepella tsugifoliae, is a frequent springtime problem on hemlocks grown in the foothills of western North Carolina. Mite numbers can increase quickly from February through May depending on the weather. Most growers in the foothills use an insecticide at least once every spring to prevent damage from this pest in hemlocks. By early summer when temperatures average in the high 80s rust mite numbers and damage decline.

White pine and Fraser fir Christmas tree growers also have occasional problems with this pest at higher elevations (> 3,000 feet). Because damage doesn't occur yearly on these species, many fir and pine growers do not scout regularly for this pest. They only notice damage when it is too late to achieve control. Some growers never realize mites are the problem, since they are so small and hard to see, and will attribute the problem nutrient deficiency or winter burn. 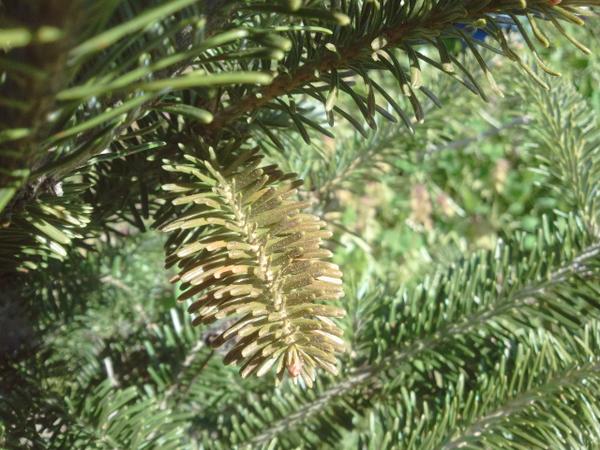 What Are Rust Mites?

Skip to What Are Rust Mites?

Rust mites are eriophyid mites and are biologically different from the more familiar spruce spider mite. Eriophyid mites have four legs at maturity rather than eight such as spider mites and predatory mites. They are very small, requiring magnification such as a hand lens (7x to 15x) or dissecting microscope (30x) to see them clearly. Rust mites can appear almost clear to cream-colored, tan or orange. They are similar in color and size to pollen, but unlike pollen their motion can be detected if watched carefully.

Rust mites suck juices from conifer needles. When many mites are present, their damage gives the needle a dusty, rust-colored appearance. To distinguish rust mite damage from a nutrient deficiency, examine needles with a hand lens. Rust mite feeding causes tiny marks or scratches running parallel to the midrib. If damage is severe, affected needles will drop off the tree or shed prematurely in the fall.

Figure 1. Drawing of an eriophyid mite. To see mites well, you need a hand lens or a microscope.

Figure 1. Drawing of an eriophyid mite. To see mites well, you need a hand lens or a microscope.

Why Are Rust Mites a Problem Only in Some Years?

Skip to Why Are Rust Mites a Problem Only in Some Years?

Rust mites produce many generations over a short period. The weather affects their reproduction and survival. Rust mites prefer moderate, spring-like temperatures and dry conditions. These weather patterns allow them to reproduce quickly. Mite numbers can explode from just a few to more than 50 on a single needle in as little as two weeks. The worst outbreaks of rust mites in white pine and Fraser fir Christmas trees have been when a warm fall is followed by a long, dry spring.

How Can I Know if I Have Rust Mites?

Skip to How Can I Know if I Have Rust Mites?

Rust mites can quickly cause serious damage in Christmas trees. Damage can be prevented by frequent scouting in the spring and prompt treatment if mite numbers have reached the treatment threshold (see below). Unfortunately, scouting is difficult because mites are so small. Many growers aren't confident in their ability to see such tiny pests. Also, in early spring, growers are busy planting, fertilizing, and applying herbicides; scouting is often neglected.

To know whether a pesticide is needed, look for the rust mites themselves, not just the damage. The goal of scouting is to treat when mites are present at great enough numbers that damage is likely but before the damage has occurred. Rust mite numbers can decline just as quickly as they build if the weather warms or predators have been active. Learn which farms and blocks tend to have rust mites, and scout those first and earliest. If mite activity builds, scout in other locations as well.

Skip to Rust Mites Secondary Pests After Pesticide Use

The use of many insecticides has triggered subsequent problems with rust mites in Fraser fir Christmas trees in western North Carolina. The synthetic pyrethroids in particular, such as Asana (esfenvalerate) and Talstar or Sniper (bifenthrin), are associated with rust mite flair-ups. Problems are worse when these materials are used anytime from spring through late summer. The use of these materials does not guarantee that mites will become a problem, and mites can develop in fields where these materials are never used. Still it is important to be aware that with their use, rust mites are much more likely, and steps should be taken to adequately scout for the mites.

How to Scout for Rust Mites

Skip to How to Scout for Rust Mites

Scout for mites in April and May. If there are areas in fields where rust mites typically develop, check these first. If not, examine 10 to 20 trees at random.

When scouting in white pine, pull needle clusters on the upper third of the plant. Mites are most often found on the southeast side of the tree. Look for mites between the needles near the base.

When scouting Fraser fir and hemlocks, take shoots of the most current growth. Examine some from the upper portions of the plant, and some from the lower. Scan both the upper and lower surfaces of the needles with a hand lens, looking for mites. If the buds have recently opened, take both the new growth and previous year's growth, to learn if the mites have moved onto the new growth.

Both the percentage of trees with rust mites and the total number of mites on the heaviest infested needle are considered in the treatment threshold. This is different from the treatment threshold for spruce spider mites, which only takes into account the percent incidence. Therefore, for a pesticide to be necessary, both of the following criteria need to be met. A counter and a scouting form will aid in keeping track of these numbers.

What should I do if mites are present but numbers are below treatment threshold? Rust mite numbers can increase rapidly given favorable weather. Weekly scouting may be necessary during critical periods in the spring. This is accomplished through hot spot scouting - choosing areas of the field with the greatest numbers of mites to assess quickly if mite numbers are increasing or declining. Keep accurate records of each scouting assessment to compare results from different scouting trips. If you are going to be treating trees anyway for twig aphids or spider mites, it may be adviseable to add a miticide to control rust mites even if numbers haven't reached treatment threshold.

What should I do if the threshold has been reached but it is almost summer? If the treatment threshold is not reached until late May or early June, it may be possible to delay a pesticide treatment and let the warmer summer temperatures "control" the mites. Scouting weekly may again be necessary to decide if the numbers are declining. Recheck these fields in the fall when temperatures start to cool as rust mites may again become active.

Skip to Treating for Rust Mites

Many miticides are commercially available for the treatment of mites. However, some miticides, especially the newer materials, are effective only against the tetranychid or spider mites. Rust mites are eriophyid mites and are biologically different from spider mites. Be sure that a given miticide specifically controls rust mites before using it. Commonly used materials that are effective against rust mites include horticultural oil, Dimethoate, Sanmite (pyridaben), and Envidor (spirodiclofen). Of these, Dimethoate may provide the poorest control as mite numbers may rebound. Many growers have learned that the cost savings found by using the cheaper Dimethoate ends up disappearing if they have to retreat. A foliar application of sulphur can also control rust mites.

Rust mites are typically not difficult to control. An air-blast mist blower or light coverage with a high-pressure sprayer and hand-held gun can provide sufficient coverage. Be sure to scout one to two weeks after trees are treated to learn if control was successful.

Will Rust Mites Come Back?

Skip to Will Rust Mites Come Back?

If weather favorable to the mites continues, rust mite numbers may build back up, even after a successful pesticide treatment. Always scout trees in a few days after pesticide application to make sure treatments were successful. Check trees again in four to six weeks to make certain rust mites are not becoming a problem again.