Sap beetles are tiny beetles (1⁄4-1⁄8" long) in the family Nitidulidae. At least three species are present in North Carolina, the dusky sap beetle (Carpophilus lugubris), strawberry sap beetle (Stelidota geminata) and fourspotted sap beetle (Glischrochilus quadrisignatus). Most species overwinter as adults, frequently in wooded areas, and migrate into strawberry fields around the time fruit are ripening. Adult sap beetles are attracted to the odor of rotting fruit. Females lay eggs in debris near rotting fruit. The larvae feed inside the fruit then pupate in the soil nearby their food source. Sap beetle larvae have light brown head capsules, three distinct pair of legs, bristles along their bodies and two projections on the end of their abdomen.

After pupation, the adults may also feed upon strawberry fruit. 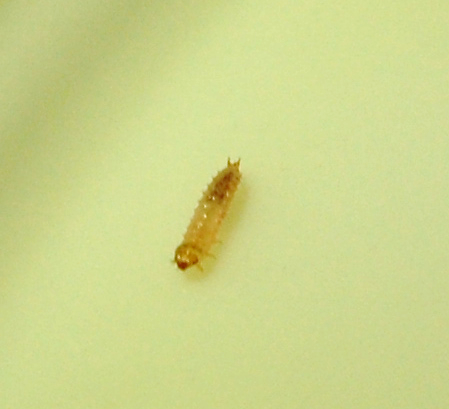 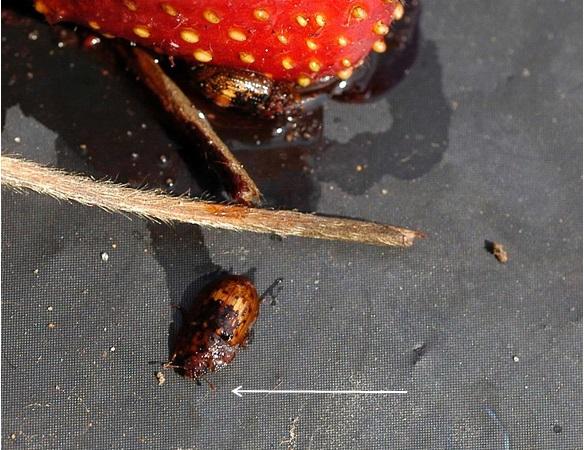 Close examination of sap beetles, like this strawberry sap beetle, reveals their knobbed antennae, which distinguish them from other small beetles.

Close examination of sap beetles, like this strawberry sap beetle, reveals their knobbed antennae, which distinguish them from other small beetles.

Feeding damage primarily occurs in rotting, damaged, or overripe fruit, but will occasionally be seen in sound fruit. In addition to damaging the fruit directly, beetles introduce fungi to the fruit that cause it to ferment.

In addition to checking fruit for beetle presence, buckets containing rotten fruit or whole wheat bread dough placed in the ground along the edges of the field can be used to monitor the presence of sap beetles. Traps should be checked and baits replaced at least weekly, and old bait should be disposed of offsite.

Removal of rotten or overripe fruit from the field is the most important control method for reducing sap beetle populations and is often sufficient to prevent damage.

If cultural methods are not sufficient to control sap beetles, foliar sprays can be applied. Refer to the North Carolina Agricultural Chemicals Manual for materials recommended for use against sap beetles in North Carolina and the Southern Region Small Fruit Consortium Strawberry IPM Guide for regional recommendations.

Good field sanitation is the only effective organically acceptable control method at this time.

Skip to For More Information