Sesame (Sesamum indicum L.) is an annual warm-season oilseed crop commonly grown in Africa and Asia. Acres of sesame in the United States continue to grow as demand outweighs domestic production. Texas and Oklahoma produce the majority of the nation’s crop. Of the 55,178 acres harvested in the US in 2017, 52,558 acres came from these two states (USDA NASS 2019). Recent work, funded by the North Carolina Department of Agriculture’s New and Emerging Crops Program, investigated the feasibility of sesame production in North Carolina. Sesame has the potential to add numerous benefits to our state’s broad acreage crop rotations. Often referred to as a “survivor crop,” sesame is one of the most drought tolerant oilseed crops. Sesame requires relatively low fertilizer and has shown resistance to certain root-knot nematode (RKN) species (Dossa et al. 2016; McSorley 1999).

Root-knot nematodes are microscopic soil-borne roundworms that cause losses of yield in many North Carolina crops such as soybean, corn, sweet potato, and cotton. There are several specific species within the broad category of root-knot nematodes, each with their preferred host plants and ranges. Common RKN species in North Carolina include Meloidogyne incognita (Southern RKN), Meloidogyne arenaria (peanut RKN), Meloidogyne hapla (Northern RKN), and Meloidogyne javanica (Javanese RKN). Recently, an invasive species called Meloidogyne enterolobii (guava RKN) has raised concern because of its highly virulent status, very broad host range, and severe symptoms that it produces in many crops.

The sesame varieties and tomato controls were planted in containers filled with a 1:1 sand to soil mixture. Thirty days after germination, we inoculated each container with 1,000 RKN eggs. Sixty days after inoculation, the roots were harvested from the containers, washed thoroughly (see Figure 2), and processed to extract the nematode eggs. We observed the roots of the tomato plant and noted the presence of galls, as shown in Figure 3. Galls are abnormal knot-like swellings along plant roots that provide nutrients for the nematode infection, which invade the plant’s root system.

We then divided the final egg count by the initial amount of eggs used to inoculate (1,000) in order to calculate the reproductive factor (RF). Reproductive factor values are frequently used to determine the susceptibility or resistance of a plant species to nematodes. An RF value less than one indicates a poor host or non-host resistance, while values above one indicate susceptibility (Ferris et al. 1993). An RF value equal to one indicates a maintenance host, in which the population of nematodes is neither increasing nor decreasing. 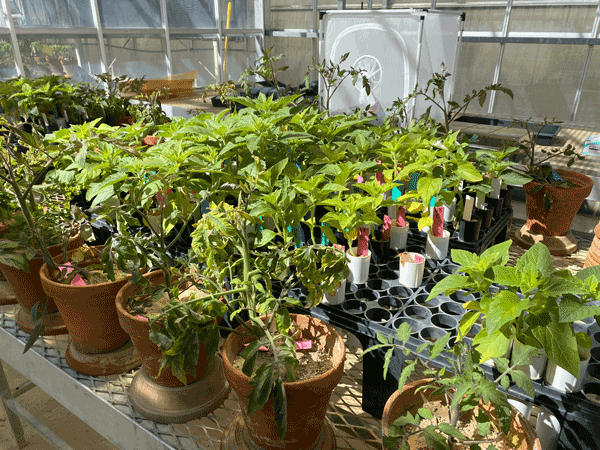 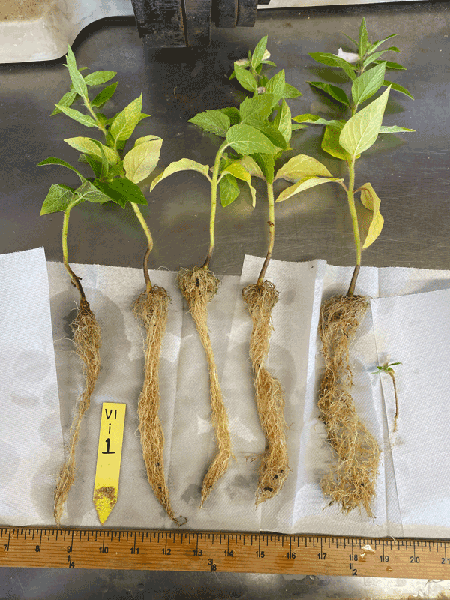 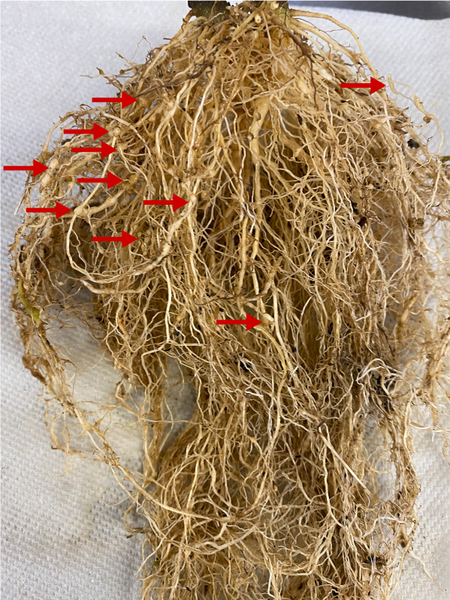 z Means sharing the same letter within a nematode species are not significantly different (p > 0.05).

The results from these greenhouse trials indicate that specific sesame varieties have strong resistance to M. incognita, M. enterolobii, and M. hapla. The observed resistance to M. enterolobii is particularly promising because this species has a broad host range and is highly virulent (Schwarz et al. 2020). Further work is needed to determine if these results translate to fields with known RKN infestation. If the resistance holds true in the field, sesame may play a critical role in crop rotations for conventional and organic producers who are managing these damaging pests. Incorporating nematode resistant crops within traditional crop rotations has the potential to reduce nematode populations. In heavily infested fields, sesame may offer farmers the ability to start managing nematodes, while also producing a cash crop on land that may otherwise be left fallow.

This work was generously supported by the North Carolina Department of Agriculture & Consumer Services New and Emerging Crops Program.