Determining nitrogen rates for a given field, crop, and year is always difficult due to complex interactions between soil, weather, management practices, and plant varieties. Nitrogen rate recommendations from soil test reports are not reliable; growers should not use soil tests to make decisions about nitrogen rate application. Instead in North Carolina, we recommend using the Realistic Yield Expectation (RYE) database. This online tool recommends the appropriate nitrogen rate when you select your county, soil series, and crop.

North Carolina State University continually conducts nitrogen rate trials on corn, wheat, and other commodity crops to support and validate the RYE database. On-farm trials were established to reflect the individual grower’s nitrogen rate with additional treatments of ±25% of that nitrogen rate. These trials occurred from 2013 to 2017 throughout the coastal plain (Figure 1).

Trials were set up as 13 equal-width strips prior to N fertilization with four replicates of the three rates—the farmer’s standard nitrogen (N) rate (Nstd); 25% more than the standard rate (N+25%); 25% less than the standard rate (N-25%)—and one calibration strip used for nitrogen rate adjustments. Strip lengths were a minimum of 250 ft, while strip width ranged from 10 ft to 40 ft depending on plant spacing, crop, and width of the combine header. Farmer-owned yield monitors were used to harvest the strips, and the yield data were transferred to researchers at North Carolina State University for review, cleaning, and data analysis.

Crop management was based on farmers’ standard production practices, and information was collected on variety; seed population; prior crop; tillage practice; planting and harvest dates; and fertilizer applications (source and rate). Fertilizer source was always urea-ammonium-nitrate (UAN), and it was split-applied in both wheat (fall and late winter) and corn (planting and layby). In wheat, 54% of the trials followed corn, 24% cotton, 12% tobacco and peanuts, and the remaining 10% soybeans, sweet potatoes, or sorghum. Tillage included 65% conventional, 27% no-till, and 8% strip-till. The majority of growers (60%) planted between 140 to 180 lbs ac-1 of wheat seed with 75% drilled at a 7.5’ spacing, and the remaining 25% of growers broadcast. In corn, more than 63% of the trials followed soybeans, with the remaining trials planted after cotton (15%), peanuts (10%), corn (8%), or sweet potato or tobacco (4%). Tillage operations included 44% strip-till, 39% conventional, and 17% no-till. Populations ranged from 23,000 to 34,000 seeds ac-1 with most trials planting between 26,000 and 30,000 seeds ac-1. Seed varieties varied but were typically classed as mid- to long-season varieties. 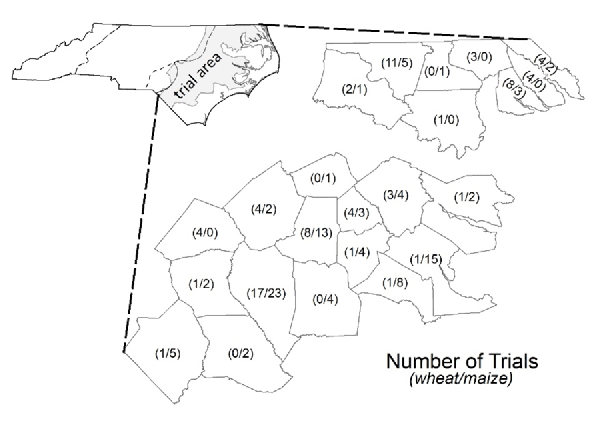 Figure 1. Location and number of on-farm nitrogen rate trials in wheat (2014–2015) and corn (2013–2017) conducted in the coastal plain of North Carolina. The first number refers to wheat, and the second number refers to corn.

Figure 1. Location and number of on-farm nitrogen rate trials in wheat (2014–2015) and corn (2013–2017) conducted in the coastal plain of North Carolina. The first number refers to wheat, and the second number refers to corn.