Skip to Host Crops and Plants

Root knot nematodes typically have a very broad host range, which limits the efficacy of crop rotation as a management tool. Some crops have become non-hosts of M. incognita due to resistance genes that have been introduced via breeding. However, the more aggressive species M. enterolobii, has been able to overcome some of the resistance genes previously effective for M. incognita. Thus, integrated management of M. enterolobii that combines cultural practices and crop protection is required to reduce losses.

Crops reported in several countries to become infected by M. enterolobii include:

A more extensive list of hosts is available through Host Range of a Genus and Species of Plant-Feeding Nematodes.

Hosts such as peanuts and maize seem to be less susceptible to M. enterolobii and can be considered for crop rotation.

Root knot nematodes can cause above ground symptoms in the form of stunting, chlorosis, and plant death, but root symptoms are the most significant, manifesting as galls in the fibrous (Figure 1) and storage roots (Figure 2) of sweetpotato. Cracking of the storage roots can also be present occasionally (Figure 3). The galls are round to oval-shaped swellings in the root tissue and can be subtle to significant in size. The level of galling depends on the susceptibility of the host, the density of nematodes, and the agressiveness of the particular nematode causing root knot. M. enterolobii tends to result in more galling than M. incognita in sweetpotato storage roots, and it also tends to occur at higher densities in infested soils. Egg masses are typically visible on the galls, starting white in color and turning dark brown as they mature. Mature female nematodes can be observed under the egg masses with a microscope (Figure 4).

Diagnosis of root knot nematode can be done visually through inspection of galls; however, species determination can only be made through molecular techniques in a diagnostics laboratory.

Management strategies are different between M. incognita and M. enterolobii; thus, it is critical that growers understand which species they have in their fields or crops before implementing a management plan to reduce yield and quality losses. Nematode species cannot be differentiated visually and the approach to identify the nematodes should include: 1) taking soil samples prior to planting to establish nematode levels and determine if fumigation and/or nematicide applications will be required in the field; 2) requesting testing for M. enterolobii in soil samples by the North Carolina Department of Agriculture & Consumer Services Nematode Lab; and 3) taking plant tissue samples if root knot nematode symptoms are observed during, or at the end of the growing season, to determine which nematode species is present. While establishing the nematode species present in your field may not result in a immediate benefit for you to take action in the present growing season, it will be invaluable information for you to manage an infested field the following growing season. Soil and tissue samples can be sent to the NCDA&CS Nematode Lab and sampling instructions can be found in their website, as well as guidelines for report interpretation. Soil samples will only provide information regarding the number of nematodes in the soil and can provide information regarding the presence of M. enterolobii if this service is specifically requested in the soil samples submission form. Tissue samples will also be able to provide information regarding the presence of M. enterolobii if the submitter requests the analysis from the NCDA&CS Nematode Lab.

Because M. enterolobii is under quarantine in North Carolina and Louisiana, it is important that growers become familiar with the requirements of the quarantines. See Management of the Guava Root Knot Nematode in Sweetpotatoes. 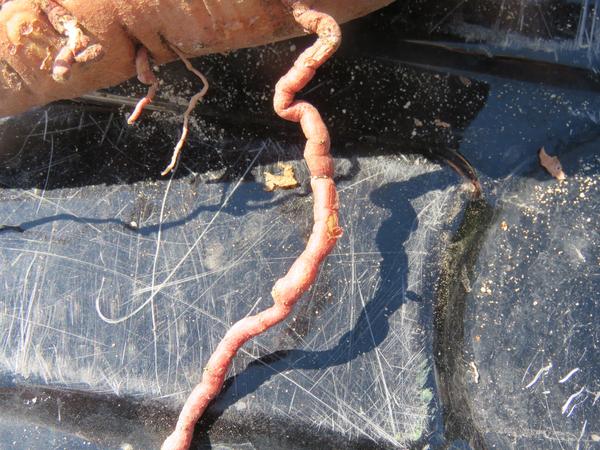 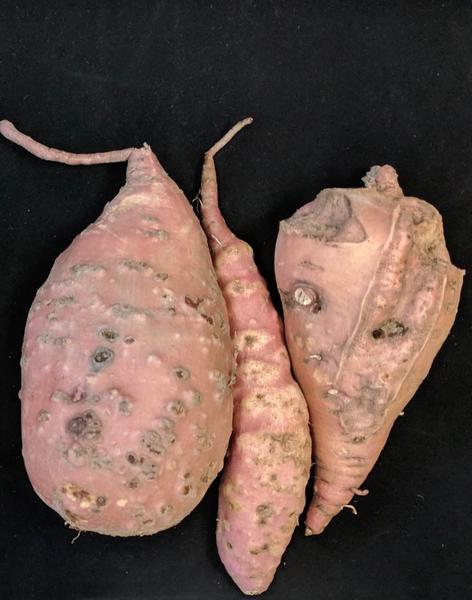 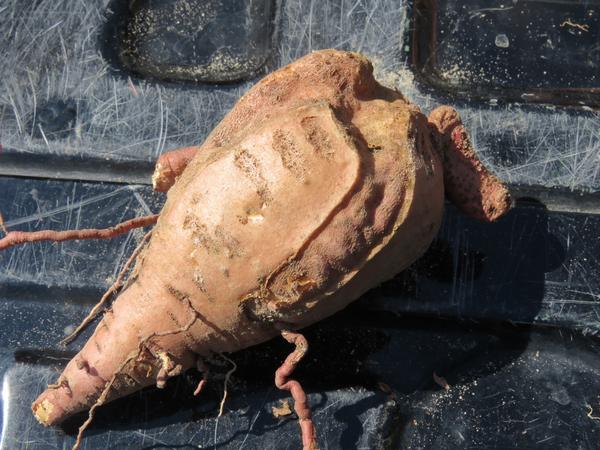 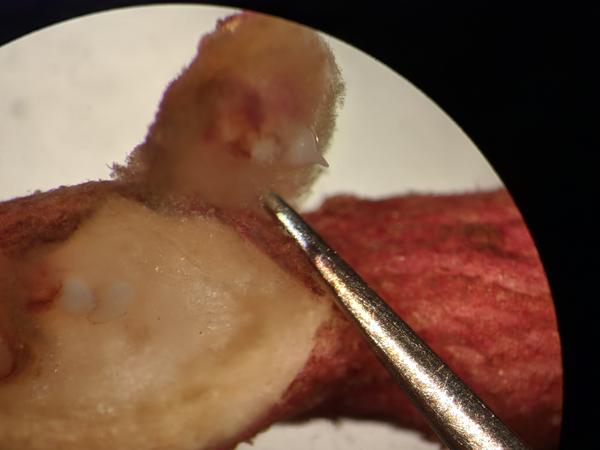 Favorable Environmental Conditions for the Disease

Skip to Favorable Environmental Conditions for the Disease

Meloidogyne species tend to be most active at temperatures higher than 64F and their reproductive capability increases with warmer temperatures. Nematodes are best adapted to the coarse-textured sandy loam soils frequently used for sweetpotato production. Root knot damage also tends to be higher under moderate drought conditions.

It is not unusual to encounter more than one Meloidogyne species in a field, with M. incognita and M. javanica being the most commonly found in sweetpotato fields. Nematode damage can also increase susceptibility to certain fungal diseases in sweetpotato such as Fusarium, as well as promote secondary infections resulting in rot.

Because of the wide host range of root knot nematodes, weeds can also serve as hosts and provide a reservoir for the nematodes to survive winter. Weeds and volunteers should be destroyed to prevent nematode survival in those hosts.

Meloidogyne species are soilborne plant pathogens and can be transmitted via infected tissue (storage roots, seed rots, pulled slips with roots, cut slips with fibrous roots) or infested soil that can be moved via planting material or equipment. The nematodes can also be moved via irrigation water and flooding events that carry infested soil.

Site selection and planting material: Nematode levels in the soil should be determined prior to planting to establish if fumigation or nematicide applications are needed (take at least 20 cores, 4 to 8 inches deep for a 5 acre field in a zig zag pattern on late summer or early fall). Planting in pathogen-free fields and using certified seed will prevent introduction of root knot nematodes into seed and production fields. Irrigation water should come from non-infested sites that will not introduce infested soil into production fields. Seed roots should only be planted in sites with no nematode issues.

Limit movement: Slips should always be cut above the soil line in a way that no roots or soil are attached to the slip since roots and soil can contain nematodes. Equipment used in infested fields should be thoroughly sanitized after use. Workers visiting infested fields should wear shoe covers and/or sanitize shoes and clothing after working in the field.

Host resistance: When possible, plant varieties that are less susceptible to root knot nematode. Covington has tolerance to M. incognita but is highly susceptible to M. enterolobii.

Reduce nematode levels in the soil: Conventional growers should use fumigants and nematicides at high rates if nematode soil levels warrant an application or if M. enterolobii is detected in soil samples. Weed and volunteer plant control will eliminate reservoirs for nematodes to survive the winter. Crop rotation to peanuts or maize will also reduce M. incognita and M. enterolobii levels in the soil.

The following are products labeled for control of root knot nematode in sweetpotato.

*Many products are available for a given active ingredient, and efficacy may vary by formulation.

This factsheet was prepared by the NCSU Vegetable Pathology Lab in 2017.