Tea scale, Fiorinia theae, has been reported on camellias throughout the Southeast and in California. It probably originated in southeast Asia. In the Southeast, tea scale is a serious pest of camellias as well as Chinese and Japanese hollies. It has also been reported on bottlebrush, dogwood, ferns, euonymus, mango, Satsuma orange, tea plant, orchids, and yaupon.

The armor or test of female tea scale insects starts light yellow then becomes hard and brown. The armor is elongate oval or boat-shaped, it is about 1⁄16 inch long, with the residue from the first molt attached at one end. Males are parrallel sided, soft, white, and narrow with a ridge down the middle of the top (Figure 4). Eggs are yellow and elongate. Eggs are always found within the armor of the female scales (Figure 5). The nymph is a flat, yellow "crawler" that has six tiny legs, and two antennae.

Tea scales primarily infest camellias and hollies but have been found on other species including boxwood and euonymus. Tea scales feed on the underside of leaves causing chlorotic spots above. Large infestations reduce plant growth and cause leaves to drop making the plant sparse and unhealthy looking. The number of blooms also decreases with heavy infestations. 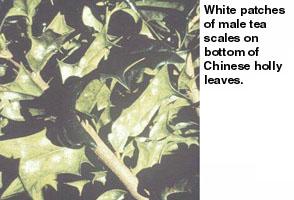 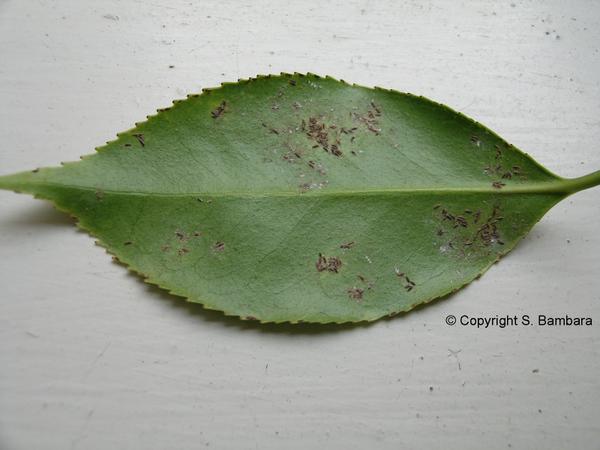 Figure 2. Tea scales on the underside of a leaf.

Figure 2. Tea scales on the underside of a leaf. 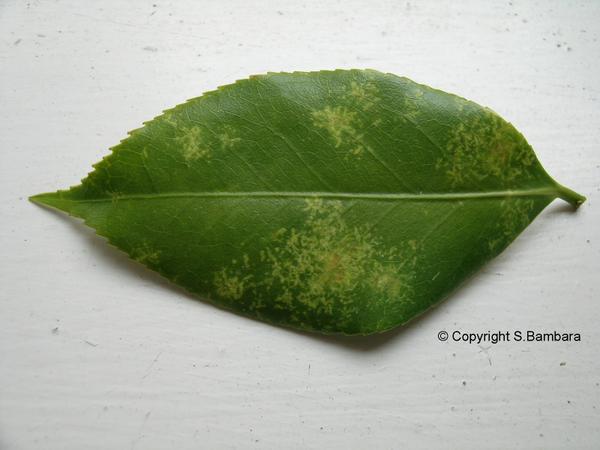 Figure 3. Yellow splotches on the top of a leaf due to tea scale damage.

Figure 3. Yellow splotches on the top of a leaf due to tea scale damage.

Each female deposits from 10 to 15 eggs under her armor. They hatch in 7 to 21 days, depending on the weather. The flat yellow crawlers migrate to find a feeding site. They settle on leaves and secrete thin, pale tests. Males sometimes produce great quantities of white strands. When the population of nymphs is dense, the undersides of the leaves may be covered with this cottony secretion. The nymphs molt 18 to 36 days after hatching, and a second molting occurs about a week later. From 41 to 65 days after hatching, female scales begin to lay eggs. The adult males have wings (Figure 6). The life cycle is usually completed in 60 to 70 days. Crawlers hatch throughout the year, although less frequently in cold than in warm weather. Because of the many overlapping broods, crawlers hatch continuously from February to November. 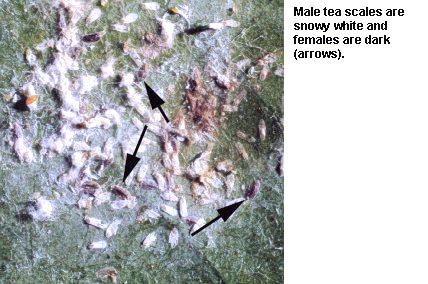 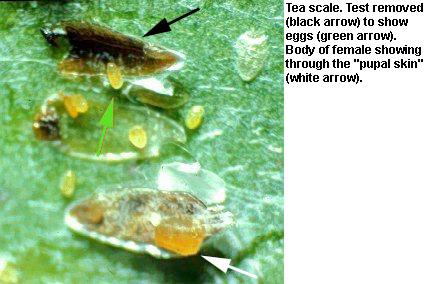 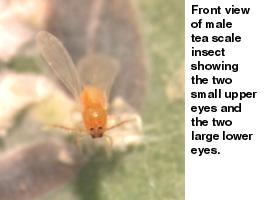 Monitor camellia and hollies by turning over leaves to look for white male floculance and brown female tests. They are most common on interior leaves. The most conspicuous characteristic of an infested plant is yellow splotching on the upper leaf surfaces, an effect of feeding insects underneath. In addition, the white male tests are very abundant and noticeable on the undersides of leaves. However, armored scale covers do not disappear when the insect dies. Therefore, the first thing to do is flip the over female covers to determine if the scales are alive. A live female will be a yellow blob that releases juice when you smash it. If no live scales are present educate clients that these will eventually weather away but require no further treatment.

Deciding if intervention is required will start with whether live scales are present. If just a few leaves have scales, as indicated by yellow spots, picking these leaves off could prevent an outbreak and any further treatment. For larger, established infestations more aggressive intervention will be required but no established thresholds exist.

The hard waxy cover protects scale from contact with insecticides. Therefore, if adults are treated with a contact insecticide the scales will live to produce another generation later that year. Crawlers are easier to kill because they are small and unprotected by a cover. Tea scale has several overlapping generations so crawlers and adults are present almost all the time but may be more abundant in the first spring generation. Thus applications will kill crawlers but may leave some adults. Follow up later in the year to determine if the population is growing and crawlers are still being produced.

If only a few leaves are infested, hand picking and destruction of infested leaves is very effective. Camellias can sustain a high degree of leaf removal and refoliate well. Remember, check undersides of leaves, especially any with yellow splotching. Another intervention option is removing problem plants. Plants that are severely damaged from years of scale infestation or that require yearly treatment to keep scale free may not be worth the work. Horticultural oil is recommended for homeowners.

Scales are often treated with broad spectrum insecticides such as pyrethroids or organophosphates. Research shows that this can increase scale insect populations by killing natural enemies. Horticultural oil is effective at killing crawlers as long as it hits them so coverage is important. Repeat applications will be nesessary to kill new crawlers that emerge from adults that survive. Systemic products are available that provide longer control and are softer on beneficials. Insect growth regulators can also be used fo armored scale control.

Conserving beneficial insects can improve control of pests such as scale. Many predators and parasitoids specialize on killing scale insects. Contact insecticides, like pyrethroids, can not penetrate waxy scale covers to kill scales but do kill natural enemies present during the application or that land on the plants for weeks after. Remember, an insecticide application will never kill every individual of a pest population. It is the job of natural enemies to clean up after and between insecticide applications.