Most landowners have a sense of their timber’s worth once it reaches sale age. Yet for many, calculating a replacement value for a forest stand before it reaches its commercial stage is a mystery. In this publication, we review the process for valuing young stands that may have been lost due to natural causes, such as drought, storms, or wildfire, or through human-caused activities, such as theft or condemnation. This publication explains the preferred method for placing a value on young forests not suited to common timber appraisal methods.

Many aspects of forest management and economics are complex. Valuation requires the right method and formulae to estimate the best return potential of an investment or property. If you have incurred a loss at the hands of others or due to natural calamities, you may be entitled to some compensation or a potential tax deductible loss. Calculating the dollar value of your loss caused by natural disasters, theft, or condemnation can be difficult with young timber stands. Since immature forests do not have any value in the present, we must project or calculate the future potential value of the standing timber.

Let’s begin with the concept of the time value of money, a fundamental key in any valuation and investment analysis. Two time scales are considered in an investment analysis—the present and the future. The future value of an investment is determined by the time period (n) and the discount (interest) rate (i). Here is the basic formula for calculating the future value (or transforming the present value into future receipts):

In Formula 1 above, i is the interest rate that captures the opportunity cost of investment, and n is the time period. For example, let’s assume a present day reforestation cost of $350 per acre and revenue from thinning at age 17 that generates $600 per acre. To make these two values comparable, using Formula 1, we account for the time value of money by determining the future value at a certain interest rate of the establishment costs in year 17, known as “compounding.” We also could determine the present day dollar equivalence at a certain discount rate of the future revenue from thinning, known as “discounting.”

The compounded value of the current reforestation cost to age 17 is:

The discounted value of the thinning revenue to year 0 is:

The future value of $350 compounded to year 17 at a 5 percent interest rate is $802. In this example, even if the $600 thinning revenue at age 17 seems larger than the initial reforestation cost of $350, it does not in fact cover the initial cost if we account for the time value of money.

The valuation of an immature stand of trees (standing trees with no market value) involves estimating the future potential of the trees. The sales comparison approach is common in property valuation—the subject property is compared with similar recently sold local properties. This method is less applicable in immature timber valuation because sales information might not be readily available for nearby properties with comparable site and stand characteristics.

Two traditional methods of estimating the value of premerchantable timber include compounded costs and discounted revenues approaches (Bullard and Monaghan 1999). The compounded costs, also called seller’s value, method estimates the value of the stand by accounting for all of the incurred timber production costs compounded to the stand’s current age. On the other hand, the discounted revenues approach, often termed buyer’s value, estimates the value of the stand by discounting the stand’s projected future revenues to the stand’s current age. The interest rate used in compounding and discounting plays a pivotal role in both methods. Both methods are reportedly less accurate in immature stand valuation, as they overlook the complete costs and revenue profiles of the investment period and often ignore the opportunity cost of the land.

Young stands of trees have no value as commercial forest products, so we must project stand growth to final harvest and work backwards from a future harvest dollar amount. The most rigorous approach considers the complete costs and revenue profiles during the investment period, as well as the opportunity cost of the investment. This approach is based on the Land Expectation Value (LEV) criterion. Here is the formula for estimating the monetary value of an immature timber stand (Bullard and Straka 2011):

This method begins with the calculation of LEV of the forest land. LEV (often called Soil Expectation Value or Bare Land Value) is the most common and accurate valuation approach used in timberland investment analysis. LEV is a special form of Net Present Value (NPV) that represents the monetary value of a land’s capacity for growing timber by capturing the present value of all the costs and revenues associated with growing timber from an infinite series of rotations. LEV represents the maximum value that can be paid for the land for forestry uses (land rent). The formula to calculate LEV is:

Once the LEV is estimated, the second step involves calculating the net value (NVn). All of the potential future revenues and costs incurred after the current age of the stand (m) are compounded to the rotation age n to estimate NVn. The combined value of LEV and NVn are discounted back to the current age of the stand, and LEV is subtracted to obtain the value of immature timber only (Vm).

To value an immature stand, you need four basic pieces of information:

Example. A landowner needs to estimate the value of the timber (and land) at age 10 for compensation of damages or losses from a natural disaster. What is the monetary value of this 10-year-old, immature (precommercial) stand?

Below we estimate the value per acre of immature trees on a medium productive site (Site Index 70 at base age 25) in eastern North Carolina. The cost and revenue profile considered in the example is depicted in Figure 1.

Assumptions for this example:

3. The next step is to plus the estimated values of LEV and NV30 into Formula 2 to obtain the value of the timber only in a 10-year-old stand of trees (V10).

Based on the stated assumptions about costs, revenues, and the interest rate, the monetary value of the 10-year-old trees only is estimated to be $736.03 per acre. The value of the timberland, including the bare land value and timber, is $1,348.35 per acre. These values are based on a set of professional assumptions highlighted above, but could be substantially different for other particular cases. Several factors, including the initial establishment costs, the age of the stand, the interest rate, the productive capacity of the land, and the rotation age can alter the estimated value significantly. Similarly, different growth and yield models could project different timber growth, which could substantially alter thinning and final harvest values.

Figure 2 depicts variations in the estimated value of the same 10-year-old stand with varying establishment costs and productivity levels. The chart shows various values of the stand when the establishment costs are varied between $50 and $350 per acre for three low, medium, and high levels of soil productivity. Higher initial investment in establishment costs in highly productive land yields the highest value of the land. For example, under the scenario of $300 establishment costs and a Site Index of 85, the value of the stand increases to $962 per acre. For an accurate estimate of the monetary value of your trees, consider contacting a consulting forester or a state service forester to help you make these calculations. If you are a self-starter and handy with assumptions and yields, you may choose to use one of several forest investment calculators available throughout the southern pine region. Some of those are listed in the Seek Professional Help section of this publication.

Figure 1. Costs and revenues per acre considered in the example.

Figure 1. Costs and revenues per acre considered in the example. 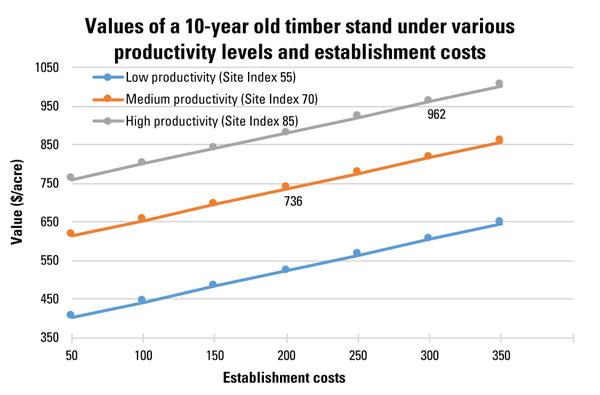 Figure 2. The value (dollars per acre) of a10-year-old timber stand under various productivity levels and establishment costs. A 5 percent discount rate and 2017 timber prices are used in all scenarios.

Figure 2. The value (dollars per acre) of a10-year-old timber stand under various productivity levels and establishment costs. A 5 percent discount rate and 2017 timber prices are used in all scenarios.

When reviewing your forestry investments, pay particular attention to the impact of various costs and revenues, particularly the cost of capital or the interest rate. A number of factors, including the initial establishment costs, the age of the stand, the interest rate, the productive capacity of the land, and the rotation age will affect forestry investments. Different growth and yield models could project varying growth rates, which will alter thinning and final harvest values accordingly.

Need professional assistance in calculating the value of your timber and land? You can obtain a list of forestry consultants from the local office of: