The whitefringed beetle, Naupactus leucoloma, is a conundrum because there is so much variation in the population. There seem to be a number of species involved in the "whitefringed beetle complex," but as there are no male whitefringed beetles in North America, crosses are impossible to make so they are all lumped together as "whitefringed beetles." Naupactus minor, Naupactus peregrinus, and Naupactus fecundus are also called whitefringed beetles although if cross-breeding were possible, they might all prove to be the same species. Adults are light to dark gray or brown, usually with a light band along the outer margins (the white fringe), and two pale lines or blotches along each side of the thorax and head. They are about 1/2 inch long. Whitefringed beetles are flightless but may may crawl up to 3/4 of a mile. Eggs are deposited in masses held together by a sticky substance that hardens upon drying. They are usually laid on or just below the surface of the soil. Whitefringed beetle are C-shaped, pale, fat, legless grubs that grow up to 1/2 inch long. Grubs overwinter and continue feeding before pupating in the soil the following spring. Emergence begins in May and continues throughout the summer. Adults live for two or three months. Each female can lay 600 to 700 eggs. There is one generation per year although some grubs may not pupate until their second spring. 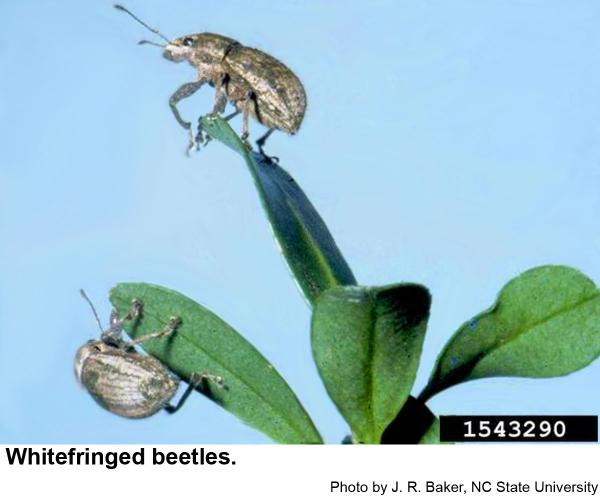 Whitefringed beetles chew on the edges of leaves.

Whitefringed beetles chew on the edges of leaves. 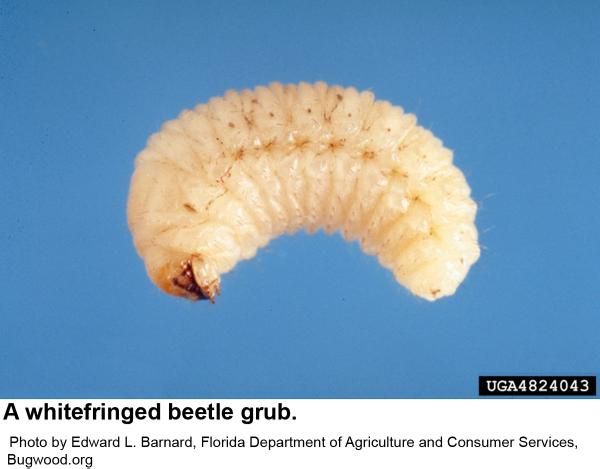 Whitefringed beetle grubs are about half and inch long.

Whitefringed beetle grubs are about half and inch long.

Whitefringed beetles have been found feeding on 385 species of trees, shrubs and ornamental plants as well as vegetable and field crops. Adults often feed gregariously and as many as 200 or 300 beetles may be found on one plant. Adults feed on the edges of leaves rather than chewing holes. The most serious damage to plant health is caused by the grubs feeding on roots. 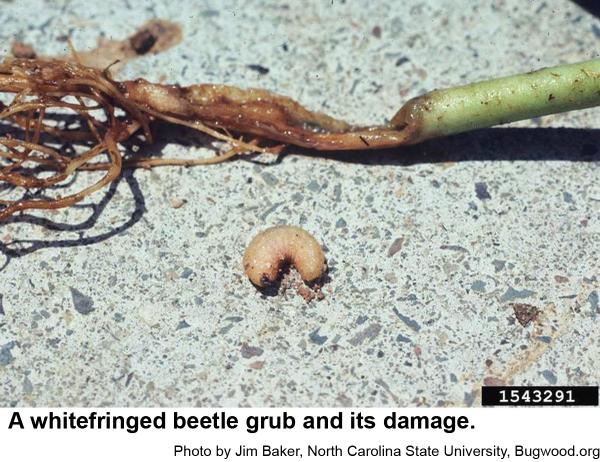 Because whitefringed beetles are parthenogentic, selection for resistance is not likely to happen. Most of the insecticides labeled for landscape use should give adequate control. Consider using one of the pyrethroids as they tend to have longer residual activity. However, pyrethroids are toxic to fish, so don't use them near ponds or streams.