The yellow scale insect, Aonidiella citrina, has round, flat, translucent armor that appears yellow-brown armor because the body of the females shows through. It is about 1/16 inch in diameter. The armor of males is smaller and elongate oval. This scale develops through a tiny crawler stage that soon settles down beside the midrib or some other prominent leaf vein to feed 6 to 24 hours after emergence from under their mother's armor. Female scales never change locations. After settling down, crawlers secrete a "test" or armor. Crawlers pierce the epidermis with their thread-like mouthparts. After molting, nymphs and females re-insert their new mouthpart. They inject saliva as they feed. Females molt twice more before maturing and eventually attracting males that mate through a flap or opening at the edge of the armor. Male crawlers molt into a second stage that secretes its distinctive armor inside of which it molts two more times before emerging from the armor as a tiny, gnat-like insect with long antennae, two wings, no mouthparts (they live about 6 hours), and four eyes (two above and two below). When mature, males emerge from under their armor to seek out females to mate. Males follow pheromones secrected by females. The body is yellowish and the wings are transluscent. Yellow scale females produce about 150 crawlers. We may have as many as three or four generations per year in North Carolina. 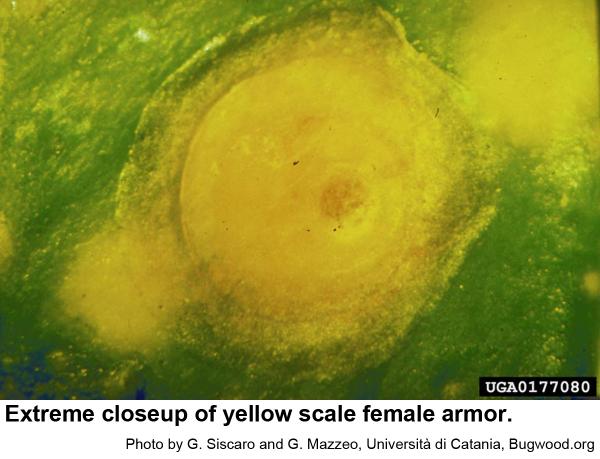 Yellow scales appear yellow because the scale shows through the armor/

Yellow scales appear yellow because the scale shows through the armor/ 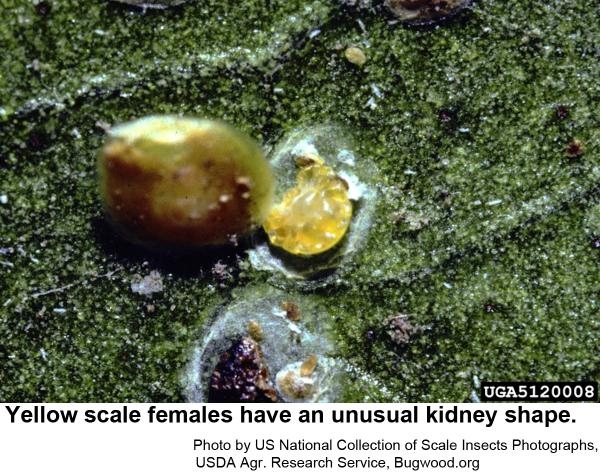 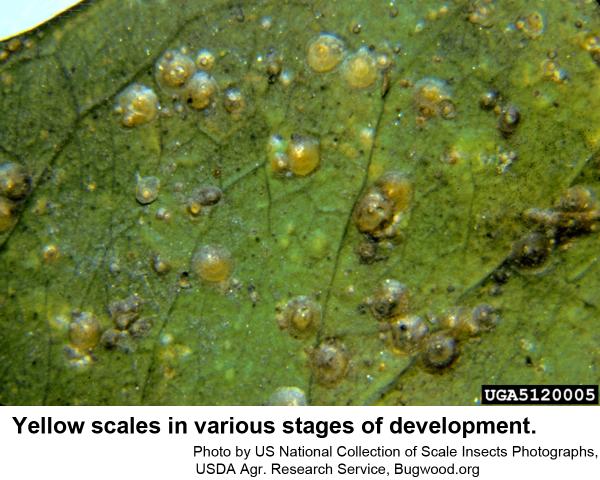 Yellow scales lay up to 150 eggs, so population increase may be dramatic.

Yellow scales lay up to 150 eggs, so population increase may be dramatic.

Yellow scales are is sometimes an economic pest of citrus. It has been recorded from more than 50 genera in 32 plant families including dogwood, euonymus, ligustrum, peach, poplar, as well as other woody ornamental plants. This scale causes leaf drop and twig dieback. 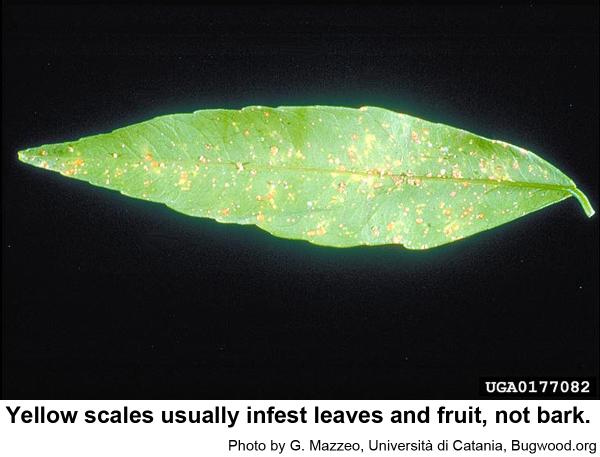 Yellow scales may cause leaf drop and twig dieback.

Yellow scales may cause leaf drop and twig dieback.

Yellow scales are infested with least four parasitic wasps that often keep the scale population in check. However, when these and other naturally occuring factors fail to keep the scales at an acceptable minimal level, it may be time to apply an insecticide. Like the other armored scales, yellow scales should be susceptible to horticultural oils (such as Volck, Oil-I-Cide, Sunspray, Supreme Spray, etc). During the growing season, it would be well to use the 2% (5 tablespoons oil per gallon of water) rate to prevent phytotoxicity. When plants are dormant, it is safe to double the amount of oil per gallon of water. Plants should be well irrigated before treating them to prevent the pesticide from damaging the plant and it is a good idea to treat fairly early in the morning so that tender plants don't scorch. Systemic insecticides can also be applied (See Dr. Frank's insect note on armored scales and their control).