Barnacle scales, Ceroplastes cirripediformis, are reddish brown to brown but are completely covered with a thick layer (test) of pearly-gray wax. Wax and all, they are about ¼ inch long. Depressed lines divide the wax into top, front, and side plates. Each plate has a small, darker, spot usually surrounding a tiny button of wax. A large rear plate has three buttons. Nymphs are partially or nearly covered with a pattern of pure white conical wax plates that show up later as buttons on mature females. Males are rare. No description of males is readily available, but they are likely to be tiny, gnat-like adults.

It is reported that barnacle scale adults are present from late July through winter on stems and twigs. First and second stage nymphs usually occur on the upper side of leaves often lining up along the veins. Third instar nymphs move to twigs where they mature into females and lay eggs beneath their body. However, their biology may not be that precisely synchronized, as nymphs have been photographed on leaves and stems well into early winter. Scales in this genus typically have one generation per year. 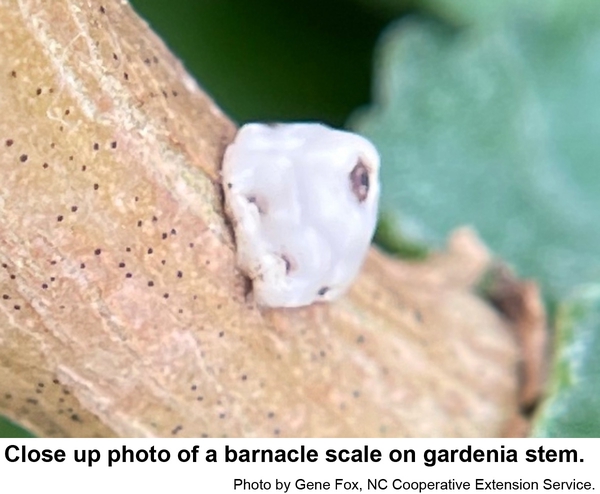 This barnacle scale shows its plates of wax outlined by narrow depressions.

This barnacle scale shows its plates of wax outlined by narrow depressions. 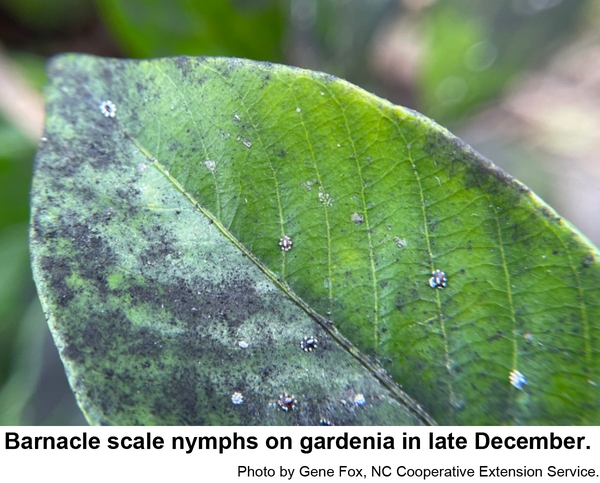 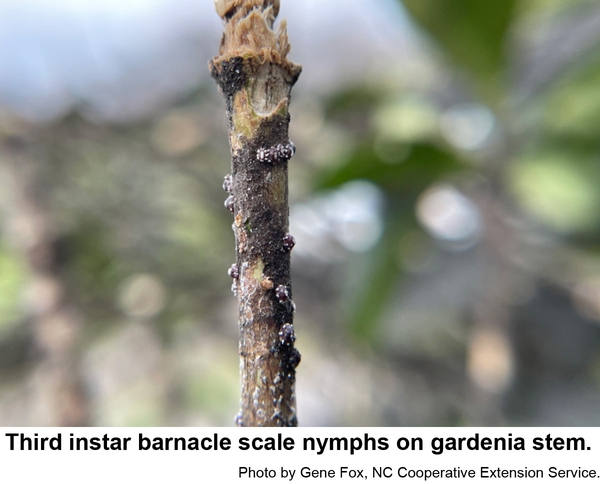 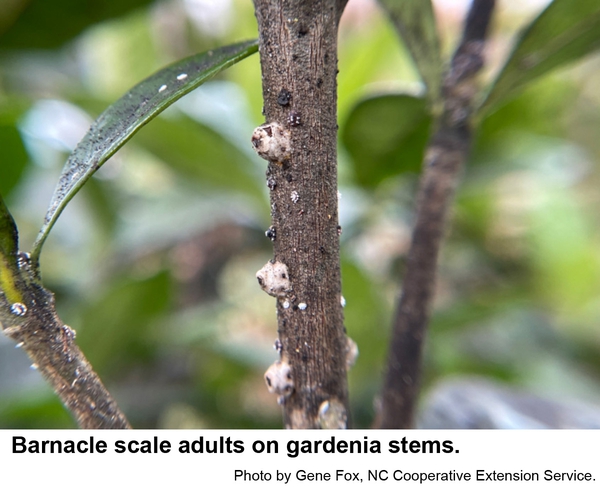 Barnacle scales have been recorded from Cannabis, citrus, gardenia, guava, passion flower and numerous other plants in 119 genera in 63 families. In North Carolina, gardenia is the most common host. Infested plants sometimes turn almost black with sooty molds and plant growth is stunted. 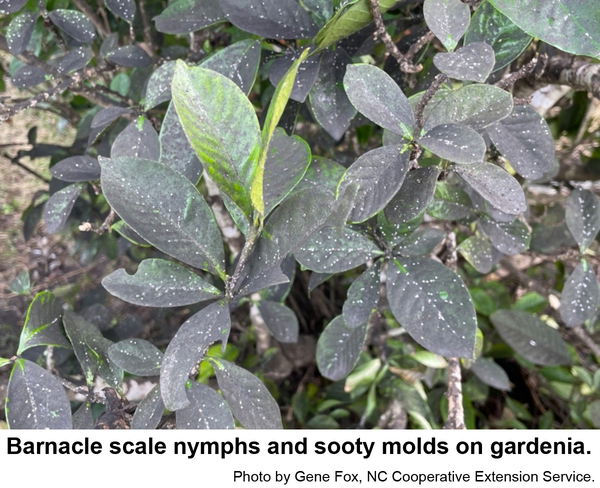 This is an outrageous example of sooty molds caused by barnacle scales. Note the numerous nymphs along the veins.

This is an outrageous example of sooty molds caused by barnacle scales. Note the numerous nymphs along the veins.

Barnacle scale crawlers probably emerge in late May to early June and migrate to the tops of leaves where they are susceptible to an insecticide spray. Young third nymphs that have not completely secreted their waxy covering are also susceptible. After these scales have completely covered their bodies with wax (probably early summer), they are likely to be very difficult to control with sprays. We have found that Indian wax scale immatures are highly susceptible to Sevin insecticide sprays as well as pyrethroid sprays. This is likely the case with barnacle scales, too. Sevin and pyrethroids labeled for residential landscape use are readily available in most big box stores, plant centers, and nurseries. Active ingredients of any pesticide are listed on the front label of any pesticide package by law—usually in very small font near the bottom of the label. The active ingredients of pyrethroid insecticides all end with "-thrin."

Eliminating the barnacle scales is the first step in reducing sooty molds on infested shrubs. Horticultural oils have the advantage of helping to loosen sooty molds from the plant surface.