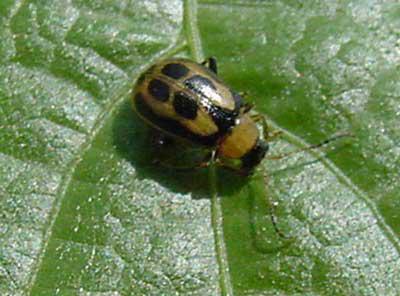 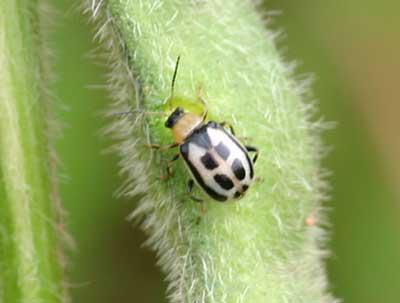 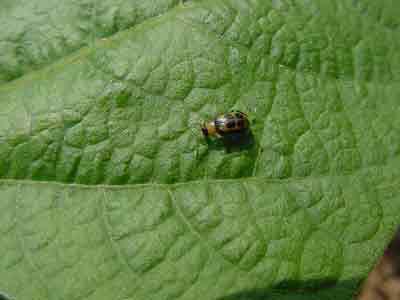 This small dark colored beetle overwinters in woods, around field edges and within soybean fields (Boiteau et al. 1979, Lam et al. 2002). Beetles are small, ca. 1⁄4 inch, have light yellow to reddish wings with four black spots (spots may be missing on some beetles), and a “V” pattern at the front of the wing covers. Beetles generally emerge from overwintering before, and in synchrony with, soybean planting. Precipitation will delay emergence (Boiteau et al. 1979). The first full-season soybeans to sprout in an area will attract many of the strong flying beetles. There are two generations of bean leaf beetle in North Carolina (Boiteau et al. 1980). 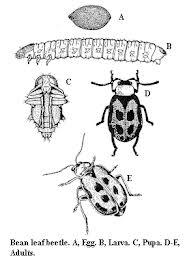 If colonization is heavy the beetles can occasionally cause severe seedling defoliation. Feeding appears as round holes eaten through the leaves, but larvae can also feed on developing root nodules (Newsom 1978). In severe situations, where defoliation is above 30%, insecticide treatment of soybeans up to two before flowering may be warranted. Vegetative soybeans are tolerant of adult feeding (Fehr et al. 1981, Hunt et al. 1994) and as seedlings become larger and fast growing, this foliage loss is seldom of concern. Whereas bean leaf beetle is a common insect of soybean seedlings in the Tidewater region, it seldom requires treatment at this locale or anywhere in North Carolina. 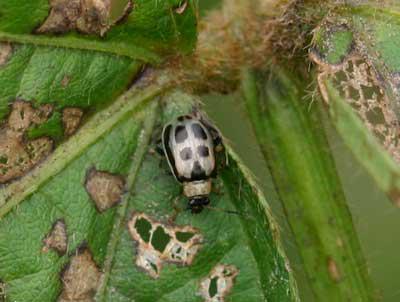 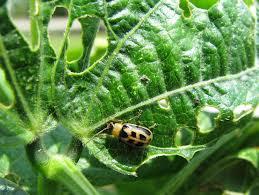 Bean leaf beetle adults can be pests in reproductive soybeans by feeding on the leaves and scarring and clipping pods. Soybeans are especially sensitive to injury from bean leaf beetle at R4-R6 (Hammack et al. 2010 and references therein) and a defoliation threshold of 15% is recommended from two weeks prior to flowering until the pods have filled.

Bean leaf beetle is rarely an individual pest in mid to late-season beans, but can become a pest when other foliage and pod feeding insects are present. The exception to this general rule is when bean leaf beetle scars pods in seed production fields, affecting seed quality by providing a path of entry for seed infecting pathogens. 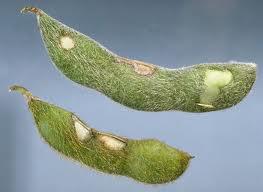 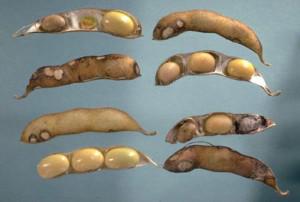 Bean leaf beetle adults transmit several virus diseases to soybean plants, notably, bean pod mottle virus, cowpea mosaic virus, and southern bean mosaic virus. The transmission of these viruses may become important on late-season soybeans, after the virus has had a chance to build-up in the early season. However, managing bean leaf beetle with insecticides is not an effective way to reduce virus infection.

Recommended insecticides can be found in the North Carolina Agricultural Chemicals Manual. Pyrethroid resistance in bean leaf beetle has been documented in the mid-South and is reported in scattered areas of North Carolina. In 2010, samples of bean leaf beetle were tested from a population in North Carolina and Virginia. These populations were not resistant to pyrethroids, but monitoring will be ongoing in future years. A screening test was initiated in 2010 in the Tidewater region for bean leaf beetle. This population had not been exposed directly to pyrethroids for several years because of declining efficacy. The field had been treated previously in 2010 with two applications of acephate for insect pest management. From the results, we inferred that bean leaf beetle tolerance to pyrethroids could be reversed, but that overreliance on a single insecticidal chemistry is detrimental (i.e., acephate was now relatively ineffective against bean leaf beetle, while pyrethroids were effective). Note that all insecticides used in this experiment may not be registered. Always consult a label before application. General principles of IPM should be following, which include using multiple management tactics and the judicious use of insecticides.